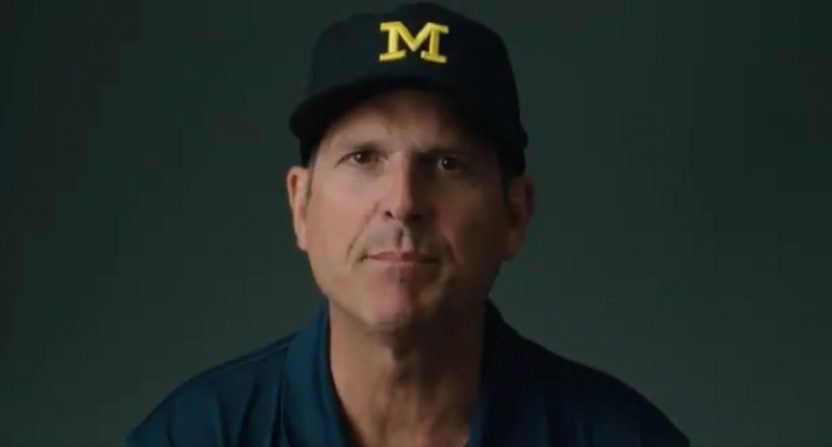 The carriage dispute between Comcast and the Big Ten Network is escalating, with the network recruiting some big names to try and win public opinion to their side. That would be the conference’s football coaches. This dispute dates back to April, when Comcast suddenly dropped the network in many “out-of-market” areas (including New York State, which just happens to be next door to two Big Ten schools in Penn State and Rutgers and has been a key market the conference is trying to make its presence felt in), and it went further in July when Fox Sports president (national networks) Mark Silverman (the former BTN president) publicly spoke about how Comcast’s overall 10-year deal with the network was expiring, and how the sides were headed into a carriage fight (which also includes Big Ten games on FS1).

Now, the network has pulled in 12 of their 14 football coaches (Wisconsin’s Paul Chryst and Ohio State’s Urban Meyer are the only two not featured here) for an ad warning Comcast customers they “could miss every Big Ten game on BTN and FS1” and directing them to “KeepBigTen.com.”

Here’s the ad they put out on Twitter Thursday:

Sports Business Journal‘s John Ourand notes that the current Comcast deal expires August 31, and that “the network said no progress has been made” since Silverman talked about this weeks ago at Big Ten Media Days. Here’s more from him on this specific promo:

The spot, which will originate online and via social media, was designed to show the conference’s unity in this dispute. Every coach is featured except Wisconsin’s Paul Chryst and Ohio State’s Urban Meyer, who will appear in other BTN-produced videos. Meyer’s absence from the first round of promos was decided prior to him being placed on an administrative leave of absence.

Well, while that decision not to use Meyer in this one may have been made before he was put on administrative leave, that probably worked out well for BTN. Involving someone who’s such a focus of off-field debate at the moment might have derailed the focus of the ad a bit. So what exactly is that focus? Well, if you go to the KeepBigTen.com website they plug, it’s a pretty standard carriage negotiation site, including links to find other providers, a link to call Comcast and complain, and a “Post To Twitter” button that generates the following tweet: “Hey Comcast, I want to keep my Big Ten games on BTN and FS1. #keepbigten keepbigten.com.”

It also contains this statement on the negotiations:

Comcast subscribers across the country are at risk of losing BTN and Big Ten football games on FS1 on September 1. We have offered Comcast proposals with rates that are in-line with what other distributors are paying; however, Comcast has not substantively responded to any of our renewal proposals, yet stopped offering BTN to subscribers outside of the conference’s home markets.

It’s relatively common to see one or both sides in a carriage dispute try to sway public opinion with these kinds of sites to put pressure on whoever they’re negotiating with, but bringing in the conference’s football coaches is an interesting escalation. Those are big names with plenty of other things to do, and having them involved may be an attempt to show how important this is to the conference. And they’ve certainly got some fans tweeting about this and applying some pressure.

Also, it’s worth noting that BTN would seem to have some decent leverage, especially when it comes to where Comcast’s subscribers are. This availability map shows that Comcast has a pretty solid presence in many Big Ten states, including Pennsylvania, Illinois, Michigan, Indiana, Maryland, New Jersey and Minnesota. And yes, while they have minimal or no presence in states like Ohio, Wisconsin and Nebraska, this dispute could still matter to fans of those teams who live elsewhere.

It’s also worth noting that in an environment where many are going to digital multichannel video programming distributors like DirecTV Now, free trials of those services might be an option for some affected fans, especially fans who are just looking to watch one particular game. DirecTV Now, fuboTV and PS Vue all offer BTN. (It should be noted that the network’s own standalone BTN Plus streaming package “will NOT include access to Big Ten Football games or any other televised B1G games or events (on BTN, ESPN, FOX, etc.),” so that isn’t an option here.)

Of course, not every Comcast subscriber is a fan of a Big Ten team or of college football at all, but there are likely a fair bit of fans who would be impacted by a dispute, even a short one. Michigan State, Iowa, Illinois, and Rutgers all play on BTN on Saturday, Sept. 1 (after that Aug. 31 deadline), Week 2 sees Ohio State, Wisconsin, Illinois, Indiana and Purdue on the network, and Week 3 has Nebraska, Maryland, Indiana, Michigan, Illinois, Minnesota, Purdue, Iowa and Northwestern on BTN. Meanwhile, with Big Ten games on FS1 also impacted, that affects Maryland (Sept. 1), Michigan and Minnesota (Sept. 8), and Penn State (Sept. 15). Many of those games aren’t against huge opponents, but there could be a lot of upset fans if they can’t watch their teams, and ads like this might help lead those fans to put pressure on Comcast.

There are potential drawbacks to this kind of public fight, too, though. For one, if the numbers of people who complain or switch aren’t that high even after a public appeal, that might convince the provider they can dig in. For another, publicly encouraging viewers to switch providers and/or pressure Comcast might further damage the relationship between the sides.  (Although it doesn’t seem that was very good in the first place, so maybe that isn’t too much of a worry.) We’ll see how this strategy works out for BTN, and just how much of an ad blitz they wind up doing.