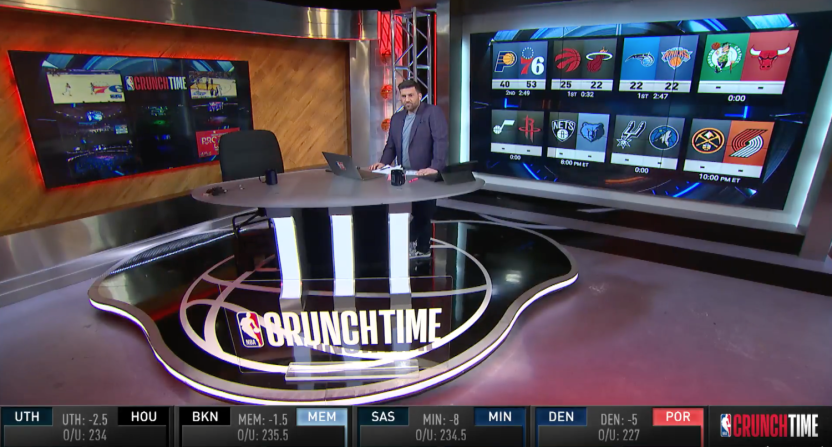 Monday night has a full 15-game slate of NBA action, with the league scheduling that for the eve of the U.S. elections Tuesday. In doing so, they’re paving the way for all their teams to be off on Election Day itself, while also trying to promote voter participation, share resources from voting organizations, and highlight the civic engagement work of teams in their markets during the Election Eve coverage.

And the NBA and Warner Bros. Discovery Sports are presenting the Election Eve games in an interesting fashion. Beginning at 8 p.m. Eastern, a NBA CrunchTime commercial-free whiparound presentation will be available to all fans for free in the NBA app, and the 15 games here will be the most NBA CrunchTime has ever shown in a night. WBD Sports senior producer Bert Bondi spoke to AA on that last week, and said he’s thrilled for the chance to show off 15 games and continuous game action.

“The coolest thing is just that there’s non-stop action,” Bondi said. “We’ve been doing variations of this show for a number of years now, and it’s cool that it’s gaining steam right now. But, on a typical night; let’s take last Monday, there were seven games, and for about two straight hours, we were able to show action almost non-stop, and that was seven games. Multiply that by two, times two plus one for 15 games, and it’s really just non-stop action.”

Scaling up from seven to 15 games seems difficult, but Bondi said he’s confident in the team they have in the control room, as well as on-air host Jared Greenberg (seen above in the studio on a previous CrunchTime broadcast).

“We do have a crew that’s excellent. Alisa Deanes-Davis is our director, Dan Eisner is basically our tape/highlight producer, and we’ve all worked together for the past number of years. And it’s just such a trust between all of us, and that extends to Jared, when I’m talking in his ear; Dan’s got the play, I’m telling Jared the play, and then Alisa’s putting it on the screen, and it’s a really cool trust that we’ve developed over the years. There’s never an ‘Are you sure? or anything like that. It’s literally like a team, well-oiled, like the Warriors passing the ball. That’s us in the control room. It’s a lot of fun; I love it, and there’s no commercials too, which is even better.”

He said there will be some challenges in keeping tabs on everything, but the veteran team should be up to it.

“I say we’ll show you all the big plays, but we want to be ahead of it, we want to show it to you as it happens. With so many games, you worry that you’ll miss stuff; I think if you talk to any person in production in any sport, they worry that they miss things. You hope you don’t, and I think that we have a staff that’s been doing this long enough that we’re going to show everything at one point or another.”

Bondi also said they’ll benefit from the way the NBA has staggered this, with games starting at 7 p.m. ET and tipping off every 15 minutes from there.

“I think what helps most is the staggered start times the NBA has set up. That’s definitely going to help us as well. We’re going to have a handful of games at halftime, some games are finishing, some games haven’t started. So as much as it is, I tried to map it out, and we’ll likely have a good eight to nine games simultaneously for a good two-plus hours. There’s always going to be about eight or nine games going on, and that is awesome.”

Bondi said he understands that most of the fans watching the league Monday night are probably going to their team-specific broadcast first, but he thinks NBA CrunchTime has some compelling alternative programming to offer during breaks, or if those primary games get boring, or before they start, or after they end.

“If you’re a NBA fan, you’re probably watching your team that night, but a couple of things. One, if they’re getting blown out, or if it’s halftime, or there’s a break, or there’s something, and you want to watch something else, we’re going to give you everything that’s happening around the league. We will show every big play, every big performance. And goofy things too, anything else that happens.”

“And it all leads to crunch time, the name of the show. We want to get down to the last two minutes, we want to show the biggest plays and the most important parts of the night. It’s going to be really fun. For us, it’s so much fun it’s ridiculous.”

NBA CrunchTime has been running in various formats for five-plus years now, and Bondi credits NBA TV executive producer John O’Connor for the specific idea, adapted from the success of NFL RedZone.

“John O’Connor, our executive producer, I’ve known him for years and we’ve worked together for years. It was his idea five-plus years ago. And quite honestly, let’s be honest, it’s all because of RedZone. We all grew up watching RedZone, and we love RedZone, right? John was like ‘Hey, we need something like that,’ and we just spoke about it like ‘All right, we can make this happen.'”

Bondi said they do face some challenges RedZone does not, though, specifically over how many times they can go to an individual game.

“The big difference between RedZone and our show, especially in the early stages, is that RedZone has no restrictions. I think their only restriction is when they have to go off the air at the end of the night. But for us, and this is part of the league’s agreement, TV contracts with the RSNs, we’re restricted in how many times we can show each game.”

“We’re unlimited with highlights, we can keep showing one-play highlights that just happened, but when I first started, we could only go to a game three times. So we would map it out, we’d go to the game maybe once in the first half, maybe once in the third quarter or early fourth, and then you had to save your one for the end of the game. You wanted to show the crunch time, that’s the point of the show.”

Bondi said the league has already worked to loosen those restrictions, though.

“What’s cool is the NBA did help us out. This started last year when we started to test it digitally. They loosened those restrictions a little bit. And now we’re able to go to each game five times. So you can kind of go one per quarter and then save the one for under two minutes.”

Bondi said they’ve also learned from various efforts over the years, and figured out how to incorporate one-play highlights and star player highlight packages.

“And what we’ve realized through the years is that because we were limited, we still wanted to show all the action, so that’s where all the one-play highlights and the updates came through, we really started to hammer those home over the years. …And along with the one-plays, it’s highlight packages of star players. The NBA, you go back to Magic and Bird, it’s a superstar league, Michael Jordan, all that stuff. So we’re always showcasing stars.”

“And we love when guys like Ja Morant go off.  Ja is actually our favorite player on Crunch Time, because he’s huge on social, he’s an animal on social. But obviously there’s Durant and Curry and LeBron. And through the years, we’ve built in adding more highlights while keeping the pace and the urgency of the show.”

Bondi said he’s also been impressed by how the reaction has grown on social media over the years.

Monday’s special NBA CrunchTime can be found for free in the NBA app beginning at 8 p.m. ET Monday.