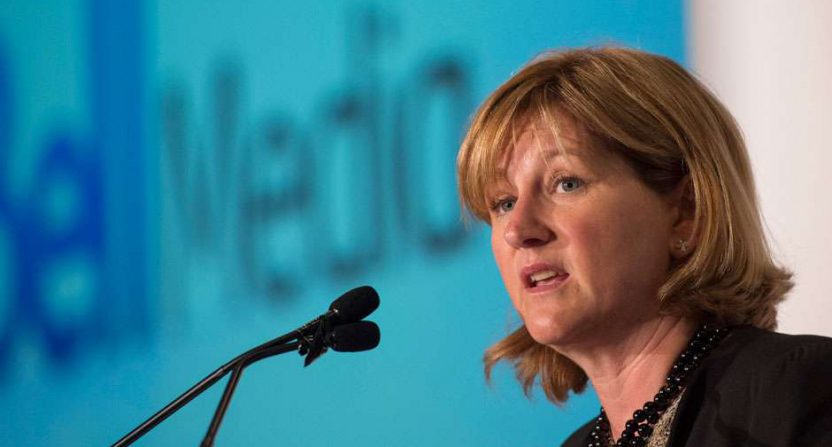 Monday saw a major move on the executive level, with Canada’s Bell Media announcing that president Mary Anne Turcke was leaving to become the NFL’s president of digital media and NFL Network. Randy Lennox will replace Turcke as Bell Media president. The NFL also issued a release on Turcke’s new position with some more details:

Turcke has served since April 2015 as President of Bell Media, a division of Bell Canada, where she successfully led Canada’s largest media company and was responsible for their flagship television channels and annual revenues of more than $3B (CAD). She will be based in the league’s Los Angeles office, reporting to NFL EVP of Media Brian Rolapp.

As President, Digital Media and NFL Network, Turcke will be responsible for leading the operations of the NFL Network, as well as overseeing NFL owned and operated media assets including NFL Films, NFL Digital and NFL.com. Turcke will also oversee digital product development and execute against the NFL’s content strategy and roadmap.

“We are delighted to have an individual of Mary Ann’s talent and expertise joining the NFL to lead the NFL Network, NFL Films and our digital and technology groups across the organization,” said [NFL commissioner Roger] Goodell. “Mary Ann has distinguished herself throughout her career, not only managing the complicated broadcast operations of Bell Media, but also growing their media sales and leading their telecommunications and IT services. I am confident that our teams in Los Angeles, New Jersey and New York will greatly benefit from the breadth of her experience and her vision for the future.”

“I am thrilled to be joining the NFL, one of the greatest and most exciting brands in the world,” Turcke said. “I feel fortunate to be given the opportunity to lead this team and work closely with Brian to focus and grow the NFL Network, NFL Films, NFL.com and our digital and technology assets.”

This is notable on a few levels. First, it’s rare to see someone leave a job as important as president of Bell Media (owner of the CTV and CTV Two networks and 40 specialty channels, including TSN), especially after less than two years. It’s also interesting to see the NFL hire a major media executive.

Turcke joined Bell in 2005 as vice president (customer experience and operations for small and medium business), then was promoted to executive vice president of field operations (overseeing installation and service across Bell’s TV and internet business) in 2008, and then became president of media sales, local TV and radio before taking over as Bell Media president in April 2015. She’s certainly had plenty of experience overseeing both content and business operations as Bell Media’s president, and that should serve her well here. We’ll see what changes she brings to the NFL’s media side.

Meanwhile, Lennox’s ascension at Bell is also notable, especially as he comes from a very different background than Turcke. He was previously Bell Media’s president, content and broadcasting (overseeing the CTV networks, local radio and TV, the specialty channels, iHeartRadio Canada and more). He was also previously the president and CEO of Universal Music Canada, where he worked for three decades. So he’s coming in with a lot of experience on the content side. It will be well worth watching to see what changes, if any, he looks to implement at Bell.

It’s not an easy time for Bell Media overall. Their Super Bowl ratings fell 39 per cent presumably largely to the CRTC decision to ban Bell from blocking U.S. commercials (which the NFL worked with Bell to oppose), and while that loss wasn’t as bad as many expected, it’s still a significant drag on their bottom line. Bell even cited that decision as part of the reason behind their recent wave of layoffs across the country, which also pose challenges for the company going forward.

On the sports front specifically, Bell no longer has national hockey rights (although maybe not having them is somewhat of a blessing, given what rival Rogers is paying for those) and has seen some challenges with CFL ratings in recent years, while the ratings have skyrocketed for the Rogers-owned-and-televised Blue Jays. TSN’s still doing well on many other fronts, but the past few years have seen their dominance certainly more in question than it was for a long time. It will be worth keeping an eye out to see if Lennox starts altering things at TSN, and if so, what he does. We’ll see what impact he and Turcke have on the sports world in their new roles.