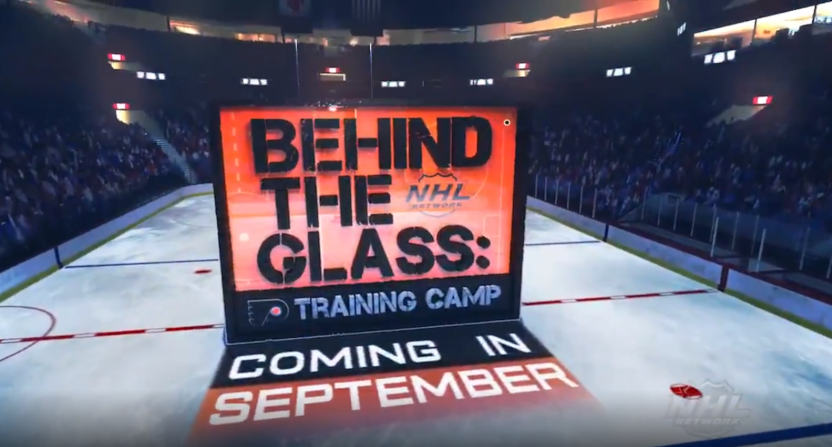 Last year saw NHL Network bring out something new with Behind The Glass, a documentary series that provided a behind-the-scenes look at the New Jersey Devils training camp (similar to the approach HBO’s Hard Knocks has taken with the NFL since 2001, and to what we’ve seen with various college football shows in recent years). While there are lots of season-long all-access shows these days, the training camp ones perhaps stand out thanks to the drama around those on the bubble to make the team, and Behind The Glass delivered that last year. And now it’s returning for a second season, this time featuring the Philadelphia Flyers. The season will premiere Sept. 25; here’s a trailer that was released Wednesday:

Get closer than ever before when we take you #BehindTheGlass for #Flyers Training Camp, debuting Sept. 25 on @NHLNetwork!

And here’s more from a NHL.com press release:

Produced by NHL Network in association with NHL Original Productions, the four-part series will offer fans a glimpse into the fast-paced nature of an NHL training camp. Within less than four weeks, Flyers players will report to camp, undergo endurance and skill tests, play in preseason and exhibition games in the U.S. and Europe, compete for roster spots, and ultimately prepare for the team’s season opener on October 4. Behind The Glass: Philadelphia Flyers Training Campis set to premiere on Wednesday, Sept. 25 at 8:00 p.m. ET on NHL Network.

Throughout the series, Behind The Glass will shadow Flyers president of hockey operations & general manager Chuck Fletcher and new head coach Alain Vigneault for behind-the-scenes insight into their evaluations on the more than 50 players competing for 23 roster spots. Behind The Glass will also spend a training session as part of a ‘day in the life’ with defenseman Shayne Gostisbehere, who calls Philadelphia his home during the offseason. The show will also profile newly acquired forward Kevin Hayes as he begins his first season with the Flyers and feature 21-year old goalie Carter Hart, following his dynamic rookie season and his first training camp as the team’s number-one goaltender. NHL Network’s cameras will travel with the Flyers to the Czech Republic, following winger and Czech native Jakub Voracek as he prepares for the team’s season-opening game in his home country against the Chicago Blackhawks on October 4 as part of the 2019 NHL Global Series™.

It makes sense that this series has again chosen a team making a preseason trip to Europe (the Devils did that last year with games in Switzerland and Sweden), as that gives them a chance to show off unusual locations and how players react to them. But the Flyers are in a little bit of a different spot than the Devils; last year, New Jersey was coming off a 44-29-9 season and their first playoff appearance (albeit a first-round exit) since their run to the Stanley Cup Final in 2011-12, while Philadelphia is coming off a 38-38-9 season where they missed the playoffs, and one that saw them fire GM Ron Hextall and coach Dave Hakstol early in the year. So this is a more obvious rebuilding effort, something that will be familiar for Hard Knocks fans.

We’ll see how this new season of Behind The Glass goes and how it’s received, but there certainly should be some interesting stories around the Flyers’ training camp this year. And it’s positive to see NHL Network continuing on with this kind of series and providing fans further behind-the-scenes glimpses of what goes on in training camp.