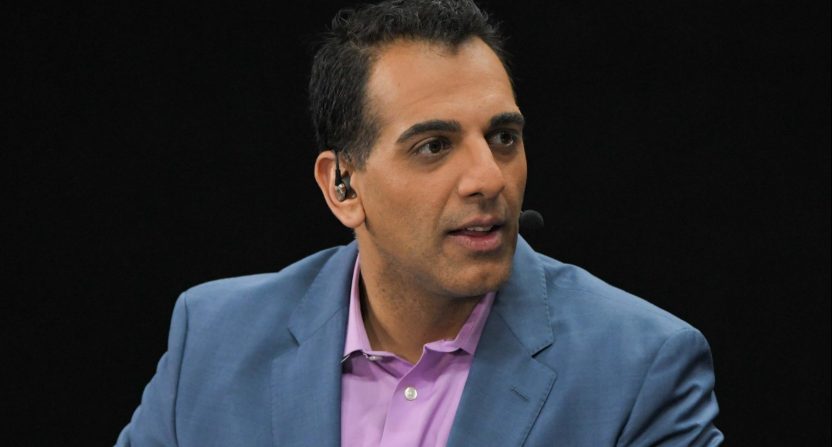 Adnan Virk has crafted a successful career talking about baseball, hockey, and movies. The sportscaster discusses baseball on MLB Network, hockey on the NHL Network, and movies on his podcast Cinephile with Adnan Virk. Recently, Awful Announcing caught up with Virk to speak to him about all three.

What’s the story of the baseball season?

“(Aaron) Judge, Judge, Judge. Every moment is a must-see event. The appetite for Aaron Judge has been enormous. Yes, Yankee fans are a robust, passionate fanbase. But there are a lot of Yankee haters as well. I talk to baseball fans, and they say ‘I’m not a Yankees fan, but I like Aaron Judge. I like what this guy stands for.’ He’s clean-cut. He’s competitive. He bet on himself. The Yankees offered him a monstrous contract. He said, ‘let’s just go run this thing out.’ And he’s put up one of the great offensive seasons in baseball history.”

What are you looking forward to in the playoffs?

“I tell myself it’s Dodgers-Astros as prohibitive favorites. A rematch (of 2017). The Astros have made five straight ALCS appearances. And yet, every time in the baseball postseason expect the unexpected. A year ago, I said, Brewers-Rays World Series. Guess what? The Brewers and Rays get knocked out in the first round. And the 88-win Atlanta Braves won the World Series.

“So, I’m curious. Who is going to be the team that upsets the applecart this year? My inkling is that it’s not going to be Dodgers-Astros. Is it the Mets? With the 1-2 punch of Max Scherzer and Jacob deGrom? Is it the Yankees finally slaying the Astros behind Judge? Is it my hometown Toronto Blue Jays, who have their great young talent in Vladimir Guerrero Jr.? Is it the Seattle Mariners, who are going to snap the longest playoff drought in professional sports, going back to 2001? Or is it the Braves, repeat champions?”

Has baseball done enough to connect with younger audiences? Is that a problem or more of a perception?

“I think it’s more of a perception. When I look at the actual numbers, it’s trending in the right direction. For example, Major League Baseball had more than 11.5 million article views on its website and its apps (at the trade deadline last month). That’s the highest single-day traffic in the history of [their] digital platforms. That means baseball fans are paying attention.

If you’re the commissioner, what is a change you would make?

“I would love to see a World Series game during the day. I know that’s a real challenge because there are deals made with Fox. They pay a lot of money and do a great job. But I miss day baseball. I would love to see a game at Yankees Stadium at 1, 4 o’clock Eastern. I know Saturday you’re up against college football, and Sunday you’re up against the NFL. But as the father of four boys, it’s hard for those guys to stay up.”

Any thoughts on the upcoming hockey season?

“You’re coming off the longest season ever. By the time the draft and free agency were over, it was the middle of July. An eight-week respite and away we go. Now training camp is open and the teams are back. A lot of these players had to deal with the insanity of the COVID- interrupted season (in 2020) and this past season was also interrupted by COVID, especially in December when all those games were canceled and rescheduled. I think it has been exhausting for the players. It has not been as long a break as these guys are used to. Will it impact them? Hopefully not.”

“Everything Everywhere All at Once I loved. It’s audacious. It’s a real spectacle. It’s a love letter to Michelle Yeoh and science fiction. It’s a great mother-and-daughter story. It’s bizarre. It doesn’t always work. There are definitely moments when they are trying too hard. This movie probably should have been cut by 10, 15 minutes. But when Everything Everywhere All at Once is going for it, you have to appreciate the chutzpah. Hopefully, it will be recognized at the Oscars.”

Is there a film you weren’t crazy about?

“Top Gun: Maverick. The fact that people have said that Tom Cruise should be nominated for an Academy Award is absurd. It’s a perfectly serviceable action movie. It’s waxing deep in nostalgia. It’s a retread of something we saw 36 years ago. That’s perfectly adequate. But if you talk about the Oscars, you aspire for better than perfectly adequate. The action scenes are nothing special. It’s melodramatic. They didn’t even cast Kelly McGillis. And there are about half a dozen lines that are ridiculous. The only thing I liked about it: the scene with Val Kilmer was good.”

Why do you dislike Tom Cruise?

“I hate Tom Cruise. I think he’s a repellent human. The reason why is after I saw Going Clear, the case against Scientology, it completely changed my life. Alex Gibney’s documentary shows you that this is not a religion, it’s a cult. If you don’t want to be a part of something, you should be allowed to leave. That’s not what happens in Scientology. If you try to leave Scientology, they engage in mental and physical abuses the ilk of which you have no idea how reprehensible it is….

“The reason I find Cruise reprehensible is he’s the biggest, most well-known Scientologist in the world. He could change this. … David Miscavige is the (leader), but Cruise is the guy everybody knows. If he makes one phone call to Miscavige and says ‘hey, you have to knock this off. You can’t treat people like this. This is awful what you’re doing. You’re hurting people.’ If he was vehement about it, he would do it. But he doesn’t because he’s complicit.”

[Editor’s note: The Church of Scientology has denied the accusations of physical or psychological abuse.]