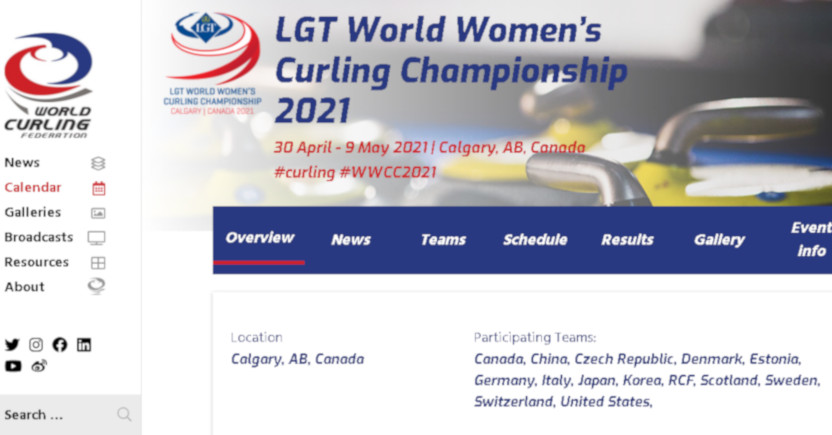 If a world championship takes place without TV or streaming coverage, does it really happen? That’s the updated version of the tree-falls-in-a-forest philosophical thought experiment, and it’s what’s currently going on at the women’s curling world championships in Calgary. On Sunday, those championships saw a delay for a deep clean of the arena following positive tests from broadcast personnel. Four positive tests were initially reported, but that number later grew to seven.

The championships resumed later Sunday, but without broadcasts on TSN or CTV or streaming coverage. Broadcast staffers have been isolating in their hotel rooms. And the dark contests continued Monday and Tuesday, with the only coverage of them coming from reporters’ and social media staffers’ tweets. While there was initially hope the broadcasts would resume Wednesday, that’s now been pushed to at least Friday afternoon. Here’s more on that from CBC’s Devin Heroux:

Broadcasts for the event have been on hold since Sunday after seven members of the crew tested positive for COVID-19 and remain in isolation.

The World Curling Federation now says they are once again delaying broadcasts to until at least Friday afternoon. However, the WCF has put forward a return competition proposal to Alberta Health, with the hopes of being able to broadcast playoff games over the weekend.

Sunday morning’s draw was postponed due to the initial broadcast crew positive tests. WCF now says that the draw will be played Friday night, pushing both quarter-finals to Saturday morning.

Gregory Strong of The Canadian Press mentioned that there may be a possible “adapted TV production setup” for a broadcast return:

The World Curling Federation hopes to use an “adapted TV production setup” at some point this week but plans remain uncertain. Broadcast personnel aren’t housed in the same hotel as the teams.

So we’ll see if that happens, and if so, how it works out. But this is a significant event, serving as the main curling qualifier for the 2022 Winter Olympics in Beijing. The top six teams here will automatically qualify for those Games, while others will have to take part in a last-chance qualifier in December. So it’s pretty remarkable to see it going on without broadcasts, especially after the men’s worlds (also in Calgary, in April) also ran into broadcast COVID issues (although that was about TSN pulling out of televising one match after a player was allowed to compete after testing positive, then negative). This is one of the more notable sports events to go on without any sort of broadcast in recent times. We’ll see if they’re able to sort that situation out by the playoff games.