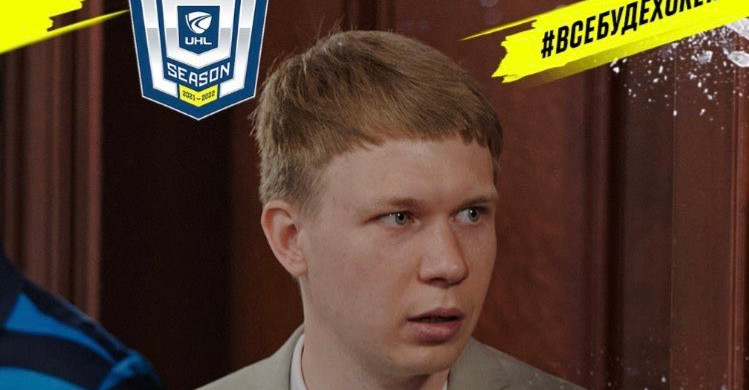 The saga around Andrei Deniskin’s racist gesture (miming peeling a banana and eating it) towards Jalen Smereck in the Ukrainian Hockey League last week continues, and it’s now led to the removal of that league’s general manager, Eugene Kolychev. Kolychev had been outspoken on Twitter about Deniskin’s behavior, and had said that punishment for Deniskin would have to come from Ice Hockey Federation of Ukraine and International Ice Hockey Federation officials. On Thursday, Kolychev (seen above) tweeted that he had been fired by the league, but that wouldn’t stop him from speaking out against racism and advocating for Smereck (who said on Instagram Tuesday he would be taking a leave of absence from his club until Smereck was “suspended and removed from the league”):

My voice has been ignored in the decision over the penalty against Andrei Deniskin, who showed a racist gesture to @jalen_smereck

I am publicly appealing to the @IIHFHockey to conduct its own investigation of the incident and help #endracism. Jalen, we got your back!

This is just the latest twist in this story. For one thing, Deniskin initially apologized to Smereck on Instagram, but later deleted that post. For another, the punishment for Deniskin was initially and widely reported as a suspension of just three games, with an initial penalty of either 10 games or a fine. And many blasted that, including Smereck’s club:

$1870 for racism?! For racist actions towards Donbass player @jalen_smereck, Kremenchuk player Andrey Deniskin was disqualified for three matches. Deniskin was also given 10 matches of an additional disqualification or fine $1870. We demand a reconsideration of the decision! pic.twitter.com/8Elj4og6Dn

But, as TSN’s Gord Miller reported Wednesday, the Ukrainian Hockey Federation is now saying their official erred in his announcement of the penalty, and it’s really 13 games and the fine:

According to the Federation official, Deniskin can NOT pay the fine instead of serving the 10 games. An official with the Ukrainian Hockey League apparently tweeted out incorrect information earlier today, using the word “or” instead of “and” when referring to the fine.

That raises questions of if it was actually a mistake, or if the federation later conveniently claimed it was a mistake after the backlash to the mild punishment. At any rate, that’s certainly not the “removed from the league” Smereck was hoping for:

And it’s fascinating that this saga has now apparently led to the dismissal of Kolychev. And it sure seems like that’s backlash for his criticisms of this incident and calls for more punishment for Deniskin. Here are some of his earlier tweets on that:

Andriy Deniskin has been banned for 3 + 10 games (or a fine of ₴50 000). The decision was made by the Disciplinary Committee of the Ice Hockey Federation of Ukraine.

The matter was given to the @IIHFHockey of Ukraine’s Disciplinary Committee by the #UHL in accordance with a long-standing agreement between the Federation and the Ukrainian Hockey League. (3/3)#EndRacism

Penalty decision for Andriy #Deniskin, who made racist gestures toward @hcdonbass player @jalen_smereck, was made NOT by Ukrainian Hockey League

The @uhlua teams: @hcdonbass, Mariupol, Kramatorsk & Bilyy Bars have applied to the President of @IIHFHockey Luc #Tardiff with a request to conduct an objective investigation and to adopt a new one to ban Andrei Deniskin from participating in any competitions held under the IIHF

Parting ways with Kolychev at this time is a curious move. Firing someone who’s been an outspoken critic of the handling of this incident right now sure makes it seem like Ukrainian hockey officials are trying to bury this story. But doing so at this time and in this way is only going to make it gain more attention. And it’s another bad look for Ukrainian hockey. We’ll see if the IIHF (and Tardif, who was only elected as president five days ago) winds up weighing in on this.