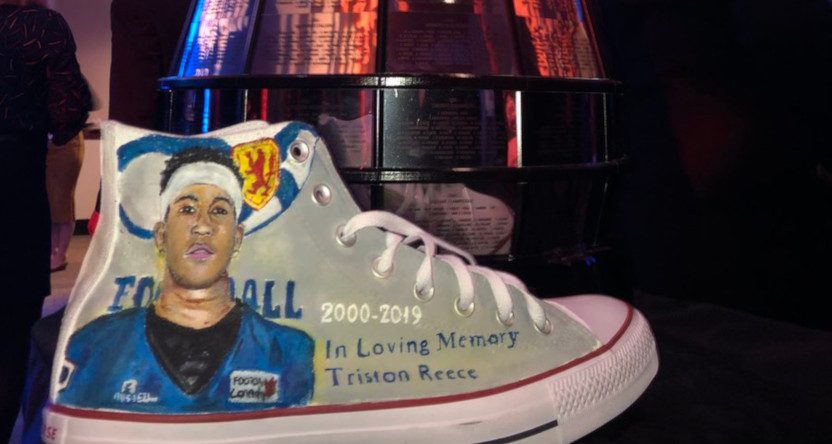 Matthew Scianitti has been at Canada’s TSN since 2013, often serving as a sideline reporter for the network’s CFL broadcasts, and one touch he’s become known for is his #GameDayChucks. Scianitti has worn all sorts of special Chuck Taylor All-Stars shoes over the years, from pink ones for women’s cancer awareness and anti-bullying efforts to rainbow ones for Pride Month to unique Grey Cup designs (which were then signed by players on the winning team and donated for charity). He’s serving as one of the network’s two sideline reporters (alongside Sara Orlesky) for Sunday’s 107th Grey Cup broadcast (6:30 p.m. Eastern, TSN/ESPN2), and he again has two special pairs of shoes for the occasion, with one being particularly notable. The first one is a good nod to Canada’s other sporting stars (featuring tennis star Bianca Andreescu and Kyle Lowry of the NBA champion Toronto Raptors), but the second one seems particularly significant for its honouring of Triston Reece:https://twitter.com/TSNScianitti/status/1198020399302397952For those who don’t know Reece’s story, the 19-year-old played for Halifax’s Citadel High School and for Football Nova Scotia and was hoping to join the Saint Mary’s University Huskies this fall, but he was shot on July 25 and died in hospital on July 26. 40-year-old Kaz Henry Cox was arrested and charged with Reece’s murder earlier this month. Reece’s death marked the first homicide in Halifax in 2019, and it sent waves throughout the Canadian football community given his prominence there.It’s very cool to see Scianitti paying tribute to Reece with these shoes, and that will be a nice addition to this broadcast.[Matthew Scianitti on Twitter]