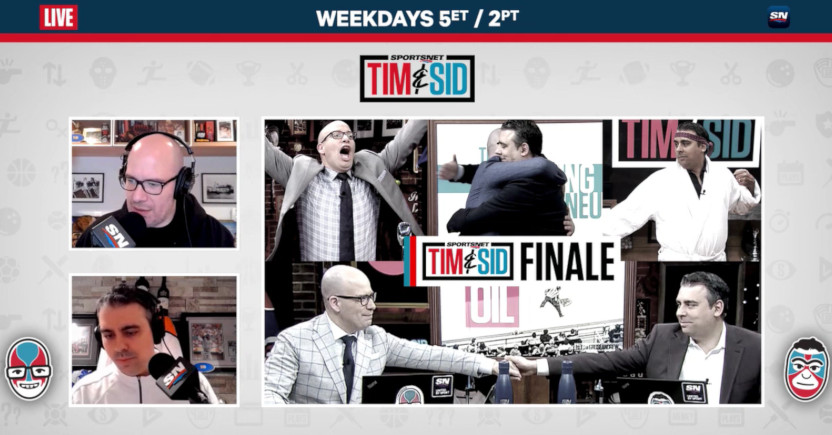 Last month, Tim Micallef and Sid Seixeiro announced that their run together on Tim and Sid (which had lasted 17 years in various radio, TV and podcasting incarnations across The Score, Sportsnet, and The Fan 590) was coming to an end thanks to Seixeiro moving on to a morning anchor role on CityTV’s Breakfast Television. On Friday, they conducted their final show together (next week will see Tim and Sid best-of-specials, and the new Tim and Friends with Micallef and guests will begin the following week). And they signed off in pretty appropriate fashion for a show that long prided itself on its relatability to its audience, the chemistry of its two hosts, and their decision to not always adhere to uptight broadcasting norms, with Seixeiro delivering an emotional tribute to Micallef and the two of them then signing off with a toast:

Some key comments there from Seixeiro from around the 3:20 mark:

“This was a lot of fun, and Tim and I, you know, to be part of a duo is very rare in our business. We grew up watching Mark Hebscher and Jim Tatti [on Global TV’s Sportsline], and they were amazing. And I just want to shout out Jay [Onrait] and Dan [O’Toole], because it’s not easy, what we do. [/tears up]. I’m such a loser. [/chuckles]. God bless all of you, and Tim, I love you so much. And I’m the ugliest crier you’ve ever seen! And Messi still is a fraud, I don’t care what anyone says! And I want to thank you all. I’ve held it together the whole show. God bless all of you.”

Micallef responds with “I love you too, man. I appreciate everything you’ve done for my career. And this started as a dinky little show on a dinky little station, and we had dreams of doing something big. And here we are 17 years later. And we hosted a parade for eight hours! And we’ve met some of the giants in the business. So a cheers to you, my friend, and cheers to everyone who has gone on this ride with us. Salut.”

Seixeiro then responds with a quote from Kenny Rogers’ “The Gambler”: “Tim, at some point though, don’t you gotta know when to hold ’em? Know when to fold ’em. Know when to walk away, know when to run. Love you all. God bless.”

Tim and Sid were one of the most prominent duos in the Canadian sports media world, and they did an incredible show for almost two decades across a variety of networks and platforms. There were a ton of thoughtful tributes to them on Twitter Friday; here are some of those.

Real talk. @tim_micallef and @Sid_Seixeiro were ?? legends to @TasMelas and me. Their on-air chemistry, passion, and authenticity was the blueprint for TBJ/TheStarters/NoDunks. Congrats on an incredible run, boys. Make the last one together a good one. #TimandSid ? pic.twitter.com/cWJ1BKNMfO

If you’ve got a few minutes to spare, check out this Stephen Brunt essay we did a few years back for ⁦@Sid_Seixeiro⁩ & ⁦@tim_micallef⁩

career highlight: lighting a cigar with an Olympic torch (sort of) in ⁦@MooreScottmoore⁩ office https://t.co/yrr9mCVqgX

I will never be able to fully articulate what @tim_micallef & @Sid_Seixeiro have meant to my life. The reality is there aren't many people who look or sound like me behind the scenes in this industry. And I will never take for granted the fact they always encouraged me to be me

I totally get that some won't understand exactly what I'm trying to say here lol, but as someone who has struggled at times with being "different" in this industry, I wanted to publicly thank them for creating a space where someone like me could always thrive and feel welcomed ??

What a run… surprised we made it to 1 year, no less almost 6! Proud to have been in the chair riding shotgun for this iteration of ⁦@timandsid⁩ . Lot of ups and downs, but this week has felt special, seeing what your work means to a lot of people. The finale tonight 5 ET pic.twitter.com/Qr849VZRYr

@Sid_Seixeiro can never be replaced. @timandsid made us all better. When you’re surrounded by the best you become better. That’s what @timandsid did. Will miss my friend @Sid_Seixeiro Can’t wait to see what my friend @tim_micallef comes up with. #ooooh pic.twitter.com/ciXFIs7Nvp

They are very different personalities who have always had an eye to doing other things. There have been a handful of close calls when they almost broke up.

After almost 20 years on the air together, Tim & Sid sign off today. https://t.co/Mdn9PoVlTJ

"You can’t fake a personality three hours a day, five days a week, for however many years it was."

A true pleasure to chat with @tim_micallef and @Sid_Seixeiro about why @timandsid worked, in all its iterations, and why now is the time to say goodbye. https://t.co/UnnyMVavMl

In university I skipped an entire semester of 1:30pm lectures because I somehow knew studying how @Tim_Micallef navigated live radio on TV was more important to my long term success than 'Poli Comms 3BB3'.

I was right, he and @Sid_Seixeiro were incredible.

@timandsid Took a moment to visit the sight of @Sid_Seixeiro's 40-yard dash and pay my respects by pouring one out for Sid! Over a decade of edutainment and fried food went by in what felt like 7.63 seconds. #TimAndSid pic.twitter.com/Ag5pM9qvty

Forever grateful to these Friends of the Show… Thank you!#tsmemories pic.twitter.com/P6j0v1MNCz

We’ll see how the new Tim and Friends show goes, and how Seixeiro does at Breakfast Television. But this is certainly a notable end of an era.

[Sportsnet; The Toronto Star; The Athletic]