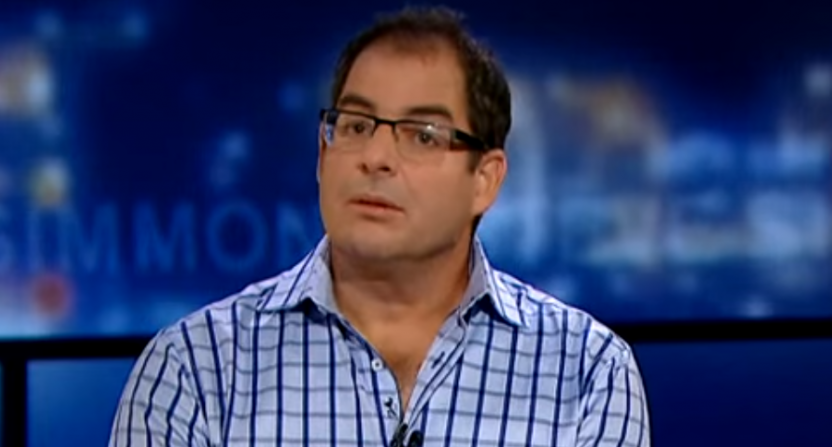 Steve Simmons of The Toronto Sun has been involved in some notable controversies before, particularly with making up (and then trying to defend) a story about the Maple Leafs’ Phil Kessel eating hot dogs daily from a non-existent vendor, blasting Raptors’ players who were seen at a casino attached to their hotel, and reporting Maple Leafs’ star Auston Matthews’ positive COVID-19 test. Now, he’s involved in another one, related to him asking Toronto Raptors’ president Masai Ujiri why Ujiri has spoken out about racism and not about crime in Toronto. TSN’s Kayla Grey tweeted initial criticism of the coded language Simmons used here, and Simmons responded by criticizing her:

Do you have a hearing problem or a comprehension problem. I asked Masai about crime in Toronto. The word “black” never came up.
Nor did it come up in doing the research for the question. https://t.co/TdCf5U1CAN

Grey responded to that:

2) Steve, was the both know prefacing that question with a “since you got here..” then follow up with gun violence stats was a bait into what could be a dangerous narrative. https://t.co/x6TUgZE7mi

Update: Here’s the clip of that question:

Leafs GM isn't getting asked questions like this. You're not slick. https://t.co/OxWIPYmRj8 pic.twitter.com/hJdyQ8EOFY

“You’re in a unique position being the only Canadian team in the NBA, and in charge of the only Canadian team in the NBA. Sometimes you see issues out there that really don’t pertain to this country at all. And I’m wondering, if in the city that you live in and operate in, shootings in Toronto are up 180 percent since you came and joined the Raptors. Death by gunfire is up by over 180 percent. Is it time for you and the Raptors to get involved in more local issues, to try and work with a city that’s seeing crime at a rate it’s never seen before?”

Simmons’ paper, The Toronto Sun, has a long history of problematic columns and articles on race, with many of them asserting the same sort of coded “crime” links he used here. And Simmons’ question to Ujiri Thursday came after the Sun ran a column from Lorrie Goldstein making many of these same assertions, titled “Do Black lives matter to Toronto’s gangs?“, using a photo of a gun, and starting with “In Canada’s largest city, Black lives are increasingly expendable. The reason is that while many businesses are shuttered because of the COVID-19 pandemic, gang business is big business in Toronto and business is booming.” So this is completely fitting behavior for someone from that paper, but it’s slightly more unusual to see their sports section sliding into that line of comment.

It’s unclear how much “research” Simmons did ahead of this question, and how many fake hot dog vendors he talked to. But his attempt to go after Ujiri on local “crime” falls short on several levels. For one, going after NBA figures’ activisim with “What about crime in Chicago!” is an age-old whataboutism strategy from right-wing outlets and personalities, from Bill O’Reilly (who claimed “LeBron James should go to Chicago and help the poor people there“) to Tucker Carlson (not specifically about the NBA in this case, but he had a “Chicago needs federal help to stop senseless killings” piece in July criticizing Black Lives Matter activists in general for not stopping unrelated gun violence in Chicago).  Goldstein is merely extending that to Toronto (as many of his paper’s columnists have before), and Simmons is bringing it to the NBA. And then he’s getting even worse still with his insulting response to Grey, a Black woman who quite likely knows a lot more about racism than he ever will.

The other particularly idiotic thing Simmons is doing here by trying to shift the focus to “Toronto crime” is ignoring how the issues of racism Ujiri and the Raptors are discussing are extremely relevant to Canadians, be they Black, indigenous, or people of color. Golden State Warriors’ player turned TNT analyst Draymond Green already made that mistake, going after the Raptors’ Black Lives Matter buses (also in a question to Ujiri, strangely enough) with “It doesn’t directly impact your team.” Black players on the Raptors absolutely experience racism at home and on the road, something Chris Boucher (a Black Canadian player on the Raptors) pointed out:

Hold on man So for all Black Canadian Mans it doesn’t directly affect Us ?? Aren’t we all fighting for the same thing… Rascism is everywhere @Money23Green I respect you but We Go through our battles too https://t.co/28jZjbuF11

And there’s plenty of racism in Canada past and present, and not just for NBA players. And racism on the road is real too; it’s something Ujiri himself has faced with attempted criminal charges and then a lawsuit from an Alameda County sheriff’s deputy, whose claims were eventually cast into harsh doubt by video. So it’s quite logical for Ujiri to be using his platform to take a wide stand against racism, and for him not to be asked to deal with “crime” in Toronto. And Grey asked Ujiri a follow-up to Simmons’ question, and got a good response:

he added that there obviously are other issues the team is hoping to help address with their platform but systemic racism and police brutality is what they are talking about now.

Grey also relayed Ujiri’s response to a question (from ESPN’s Tim Bontemps) about the release of that tape:

A very important quote to come back to here because its a relatable feeling for so many in the BIPOC community. The facts are clearly the facts and yet, systemic racism works in ways to make you question everything— if it really even happened to you. https://t.co/GdyxVISNjs

And that question from Bontemps was much better than the one from Simmons, and was recognized as such by Raptors radio broadcaster Paul Jones:

hey @TimBontemps . Great question to keep the conversation at the forefront. Its amazing how things are "returning to normal" and that normal doesn't work for black people. We need to keep it on the front burner regularly. Thanks for the spark man #BlackLivesMatter #rtz #Raptors