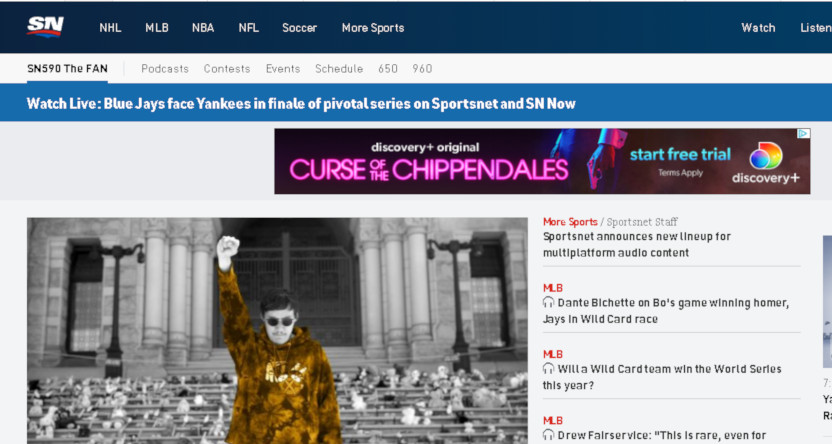 It’s difficult to discuss the whole scope of the radio changes announced by Sportsnet (the Canadian company owned by Rogers, not any of the American networks by that name that will be more familiar to U.S. readers) this week. The company’s release, which started with a “Listen up sports fans!”, was extremely vague, mostly throwing out meaningless marketing-inspired lines like “Whether on live radio or on-demand podcasts, Sportsnet’s new audio content plans replace the traditional radio lineup in Toronto in favour of seasonal, sport-specific and spontaneous programming so that fans can consume the content that matters most to them on their preferred platforms, beginning this Monday, Oct. 4.” The actual implications of this are more complicated, but they come with many exits in Toronto and Vancouver in particular (and perhaps in Calgary as well, but the situation there is less clear).

There are a few big things that we do actually know at this point, many of which are outlined in this piece from Sean Fitz-Gerald of The Athletic. There are a lot of people leaving Sportsnet The Fan 590 (links to their Twitter announcements provided below where possible), including drive-time co-host host Richard Deitsch, morning co-host Scott MacArthur (his co-host Mike Zigomanis left last week), versatile and long-time personality Rob Wong, assistant program director Jason Rozon,  Josh Goldberg (known for his work on Blue Jays’ coverage), update anchor and host Alex Seixeiro, anchor Andrew Nie, and more. There are some notable figures leaving Sportsnet 690 Vancouver (as outlined by Patrick Johnston of The Province), including morning hosts Scott Rintoul and Karen Surman, afternoon anchor Adam Forsythe, and more.

On the additions side, Jeff Marek will now have a national hockey show airing on Sportsnet The Fan 590 (website seen above) in Toronto, Sportsnet 960 in Calgary and Sportsnet 650 in Vancouver from 12-2 p.m. Eastern during the NHL season. As for the rest, there haven’t been details released yet on the Calgary and Vancouver markets, but the Sportsnet release has programming updates for Fan 590 in Toronto. There, Will Lou will have a Raptors show airing from 2-3 p.m. Eastern during the NBA season, with production and guest-hosting from Alex Wong.

The Fan’s morning show from 6-10 a.m. Eastern will now feature Fan veteran JD Bunkis with Fan newcomers Blake Murphy and Ailish Forfar. Nick Kypreos is coming back to Sportsnet for a 3-5 p.m. ET show alongside Justin Bourne, while the 5-7 p.m. ET slot will look quite different depending on season; Jeff Blair and Kevin Barker will host there during “MLB season,” with Stephen Brunt and Ben Ennis hosting there during “NBA and NHL season” (there are as yet no details on what happens during the overlap of those seasons).  Here’s an attempt from @yyzsportsmedia to show this in a coherent lineup form (for the “NBA and NHL season” part of the calendar):

So, the Press release was a hot mess.. so here is the new fan lineup.. for those who care pic.twitter.com/dWp1X0HYZn

Beyond the specific changes, there’s much made in Sportsnet’s release about lineup flexibility and podcast emphasis. Here’s some of that:

“This is a fan-inspired approach to programming that will focus on team-centric content, recognizing that audiences are most interested in listening to shows that talk about their favourite teams and players,” said Dan Toman, Director of Audio Programming, Sportsnet. “Our new slate of programming is more podcast-friendly and personality driven as we continue our efforts to build a community of sports fans.”

Flexibility is the name of the game with Sportsnet’s new audio content in Toronto as shows can and will move timeslots and increase or decrease frequency to reflect the news of the day. Many of the shows will offer on-demand only episodes, ensuring the conversation continues when and where fans are having it outside the live broadcast windows.

The idea of emphasizing podcasts over conventional radio content is certainly something we’ve seen before, and in the U.S., there’s certain content where that’s proven to be a good fit. For example, Bomani Jones chose to shift from radio to a podcast-focused role in 2017. The new Meadowlark Media approach (including former ESPN Radio personality Dan Le Batard and former ESPN executive John Skipper) is also much more focused on on-demand content than on a specific radio lineup. And there may be some merit to that in Canada as well; many of the people let go in TSN Radio’s Vancouver/Winnipeg/Hamilton cuts in February are now doing well on various on-demand and streaming shows.

And there are reasons to think a podcast-focused approach could work here. The Fan branding in particular still has some resonance for many Canadians, and it’s notable that Sportsnet’s radio shows really haven’t dove into podcasting much before this, with their particular shows not even being broken down into individual hours or interviews. A renewed focus on serving digital listeners as well might help there.

And figures like Lou, Wong, and Murphy in particular are already known in the podcast space. And good content can work both as a radio show and as a podcast, and there’s some advantage to being able to put out a quick podcast on breaking events (in conversation with Fitz-Gerald, Toman cited the idea of getting Lou to react to a morning Raptors move for a podcast released before his show airs). However, there are definitely some questions with this approach, and Kingstar Media’s Adam Seaborn outlined some of them to Fitz-Gerald:

Adam Seaborn is director of sales and media operations with Kingstar Media, an ad-buying company in Toronto. He had questions about how the station was going to balance the needs of its traditional radio audience with the new focus on podcasts.

Mixing the content can also lead to questions as the company reaches out to advertisers, he said.

“As Rogers Sportsnet’s ad sales team, it is confusing to say exactly what you are selling at the moment,” said Seaborn. “Am I selling a great local radio station in Calgary, Vancouver and Toronto?”

It’s worth noting that this is just one of many changes in the Canadian sports media landscape recently. As mentioned, TSN Radio (owned by Rogers/Sportsnet competitor Bell) shut down three of its local stations in February. February also saw Sportsnet The Fan 590 part ways with long-time programming director Dave Cadeau, replacing him with Toman shortly afterwards. While TSN still has local stations in Toronto, Montreal, and Edmonton, and while Sportsnet still has local stations in Toronto, Calgary, and Vancouver, both of those companies have delivered some cuts to their local content, with these new Sportsnet changes only the most recent thing there. And it’s also notable that Sportsnet made the (Rogers-owned) Toronto Blue Jays the only MLB team without a dedicated radio feed earlier this year, instead simulcasting their TV feed and citing pandemic concerns (which didn’t stop any of the other 29 teams from delivering a dedicated radio broadcast), persevering despite strong initial criticism, and then finally bringing dedicated radio broadcasts back at the end of July.

The main takeaway with these latest Sportsnet moves is that it’s probably too soon to evaluate the overall impact. The Sportsnet stations here are absolutely going to lose some listeners who were fans of the former hosts, the former programs, and the former ways of doing business. At the same time, they’re going to gain some listeners who had followed some of these new personalities elsewhere, and they’re certainly going to see greater podcast downloads from putting some emphasis on that medium (regardless of how good the old content was, there weren’t significant resources put into tailoring it for podcast consumption, and it sounds like that’s going to change).

Sportsnet is going to lose some local listeners in Calgary and Vancouver when local-tailored programming there gets replaced with a national show like Marek’s. But that show also has its own audience potential, and on the digital front, it may find regular listeners from outside the three cities where Sportsnet has a linear radio station. Similarly, some of the new Toronto shows may draw lower local radio ratings, but greater national podcast downloads.

And with a dramatic series of moves like what Sportsnet is doing here, there’s a lot of data from the inside (hosts’ salaries, ad sale rates for different shows, costs of local programming versus syndicated programming, value of a podcast download versus a radio listener) that we simply don’t have access to. So we’ll see how it all works out for them in the end. But it’s definitely notable to see them making such a dramatic shift to their radio programming, and altering the Canadian media landscape significantly along the way.

[The Athletic; Rogers Sports And Media]