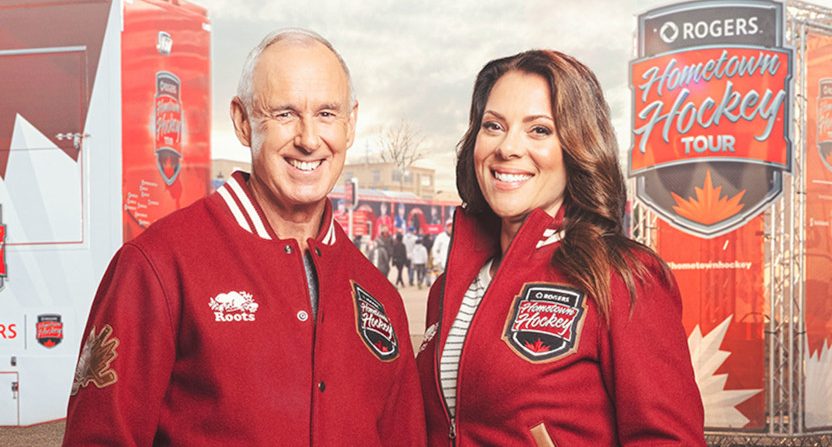 There’s significant change coming to the weekly NHL programming on Canadian network Sportsnet next season. As per Sean Fitz-Gerald of The Athletic, the Rogers Communications-owned network has canceled their Rogers Hometown Hockey game broadcasts. Those broadcasts had been a weekly fixture since Rogers took over Canadian national NHL rights ahead of the 2014-15 season.

Hometown Hockey featured Ron MacLean and Tara Slone (seen at left and right above respectively) hosting a weekly NHL game broadcast from a different Canadian community each week, with a weekend festival in that community leading up to the game and with the game broadcast featuring profiles on local players and hockey in the town. It was a Sunday night broadcast for most of its lifespan, starting on broadcast network CityTV, then moving to Sportsnet beginning with the 2015-16 season. But it was suspended for the 2020-21 season (actually only played in 2021) thanks to COVID-19 concerns. And while it returned for this past 2021-22 season, it aired on Monday nights then instead.

Now, Fitz-Gerald writes that Sportsnet is set to do something different with their Monday night NHL games. We don’t know what that will be yet, or who will be involved, but we know that Hometown Hockey is ending, and that does appear set to lead to some job losses. MacLean told Fitz-Gerald that while his new contract hasn’t been finalized yet, he has an agreement in principle to keep working Saturday nights. But it’s unclear if Slone will continue with Sportsnet, and it’s unclear what this will mean for the production people who had been assigned to Hometown Hockey. MacLean had some thoughts on that:

“There’s so much loss for some in this story,” MacLean said in an interview. “That’s first and foremost: I just think of those who are affected.”

Meanwhile, Sportsnet offered this statement to The Athletic:

Sportsnet said “Hometown Hockey” was “retiring from the road” after making 160 stops across Canada over almost a decade on the air. The network spokesperson said “the time is simply right to bring it to a natural close and explore new broadcast opportunities, expand our storytelling capabilities and evolve the viewer experience.”

Change does happen, and perhaps the weekly Hometown Hockey road trip (certainly expensive on several levels) wasn’t a good fit for Sportsnet anymore. That’s a decision they can certainly make. It’s worth looking back at what this broadcast did, though. Hockey broadcasts from different Canadian communities had been done before, especially with the CBC’s Hockey Day In Canada, but Hometown Hockey‘s weekly scale was a remarkable jump, and that let them visit many more communities.

Hometown Hockey also delivered a broadcast with women in all on-air roles on March 8, 2020, featuring Leah Hextall, Cassie Campbell-Pascall, and Christine Simpson. That was the same day NBCSN did that for a U.S. broadcast, making those two broadcasts the first all-female English ones in NHL history (Claudine Douville and Daniele Sauvageau called a national game for RDS in French in 2008). And Hometown Hockey produced quite a few memorable features as well: 73 of them can be seen in this YouTube playlist. Here are a few that particularly stand out:

Last November, too, Hometown Hockey saw one of the more remarkable commentaries on serious league issues ever seen on a rightsholder’s game broadcast, with Slone addressing the NHL’s “deeply broken” culture around the Blackhawks’ sexual abuse scandal and cover-up and the NHL’s response to that:

I’m grateful to have the support of everyone at @hometownhockey_ who encouraged me say what was in my heart last night.

Some thoughts on the NHL’s broken culture. pic.twitter.com/DkhJ7S2jOL

It’s unclear if Slone will remain with Sportsnet after the cancellation of Hometown Hockey. But her co-hosting over the years has been appreciated, and she’s brought a different and valuable perspective to national broadcasts. She likely has plenty of opportunities in other areas (she’s also the lead singer of band Joydrop), but if she decides to continue in sports media, her Hometown Hockey reel should certainly get her a look.

As for MacLean, it’s positive to hear that he’ll continue on the Saturday broadcasts; he’s been working on Hockey Night In Canada since 1986, except for a short 2014-16 break. He joined Sportsnet in 2014 after they took over national rights (Hockey Night continued on CBC, but as a Sportsnet-produced broadcast), initially shifting to Hometown Hockey while George Strombopolous took over hosting the main Hockey Night show (MacLean continued to do Coach’s Corner there with Don Cherry). Ahead of the 2016-17 season, though, he was brought back as the main Hockey Night host, while also continuing his work with Cherry (until Cherry’s 2019 firing after on-air anti-immigrant remarks) and his work on Hometown Hockey. Now, there’s more change ahead for him with Hometown Hockey going away, but it looks like his Hockey Night role will continue.

It will be interesting to see what Sportsnet does with their Monday night NHL broadcasts after this. It’s possible that they go to just a standard broadcast like their Wednesday and Saturday ones, originating from the Rogers campus in Toronto. That may seem like a loss after Hometown Hockey being so different, though, so it’s possible they try something else a little outside the box. We’ll have to wait and see.

Update: this piece initially noted the regular Sportsnet broadcasts originate from a studio at CBC headquarters, but that was only the case until the start of the 2021-22 season, when they moved to Rogers’ campus.

[The Athletic; image from Sportsnet.ca]