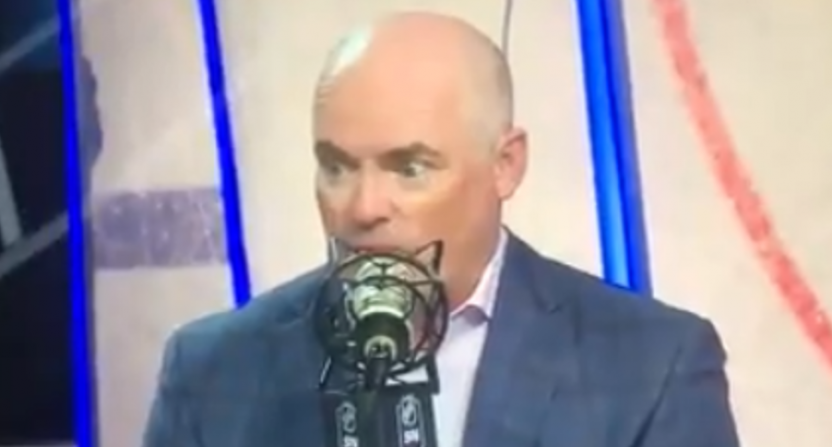 Canada’s Rogers Sportsnet has created buzz on around cyberbullying twice this week, but in very different ways. On Friday, as part of a larger #StopCyberbullyingDay, Sportsnet anchors Evanka Osmak and Faizal Khamisa joined sister station Breakfast Television to talk about a new Sportsnet initiative against cyberbullying, #NotFairGame.

But this was just two day after one of Sportsnet’s own personalities, columnist and radio host Damien Cox, said Wednesday “You can only be cyberbullied to some extent if you allow yourself to be, if you go on social media, if you participate in social media” on air when discussing the Ottawa Senators’ situation, and wound up taking a lot of flak on Twitter as a result. (Oh, and Cox later retweeted the anti-bullying ad.)

Next, here’s the Cox clip, from Toronto radio station Sportsnet The Fan 590’s Hockey Central At Noon Wednesday. The whole hour is here, with Daren Millard, John Shannon and Cox discussing the Ottawa case (where Melinda Karlsson, wife of defenseman Erik Karlsson, has filed for a peace bond against Monika Caryk,  the long-time girlfriend of fellow Senators’ player Mike Hoffman, alleging that Caryk has been cyberbullying her) from about the one-minute mark through the 28-minute mark, and it’s got lots of opinions that can be questioned, from Shannon saying there’s been real harm felt “by both sides” around 2:28 (he goes on to explain that he means that the accusations against Caryk haven’t been proven yet; Cox, to his credit, takes issue with that) through Cox arguing that the Senators’ teammates should have settled this in the locker room (9:30).

But maybe the most controversial part comes around 5:30 of the full clip, where Cox argues that “You can only be cyberbullied, to some extent, if you allow yourself to be.” Here’s a clip of that part:

Cox says “I mean, I think the one thing about social media that we’re learning more and more, and I think all of us have some experience, you can only be cyberbullied, to some extent, if you allow yourself to be. If you go on social media, if you participate in social media, if it’s important to you, you are vulnerable to that. If you say ‘I’m not going to have anything to do with that,’ then you’re not as vulnerable to that. So that’s part of this story, which is a multifaceted story, it has to do with where we are as a culture in 2018 as much as hockey and as much as individual things.”

Millard then chimes in with “But we all have the right to go on social media and not be bullied.” Cox says “Yeah, and I guess the issue is what is bullying, what isn’t bullying, what is proper conduct, what isn’t proper conduct?” They then get into a discussion about reporting tweets for abuse, and Cox says “I’ve been threatened with a lawsuit for something I wrote on Twitter. It’s an unusual platform.”

Look, Cox is technically correct here. Yes, if you don’t use Twitter at all, or if you tweet and don’t look at replies, you can avoid a fair bit of cyberbullying; there could still be horrible tweets about you in either case, and you could find out about them if others bring them up, but you’d avoid seeing a lot of the negative discussion about you. But that comment really misses the point, and seems like quite an insensitive thing to say in a cyberbullying discussion; it’s saying that the answer isn’t stopping cyberbullying on social media platforms, but just not looking at it, or not having a social media presence at all. And that’s blaming the victim rather than the perpetrator, and putting the responsibility on them to change.

And while these pundits undoubtedly get nasty things said about them on Twitter, it’s questionable if that’s anywhere close to the level of the comments made about Melinda Karlsson. And it’s notable that many of the nasty comments about someone like Cox come in response to them making nasty comments of their own about others, like Cox’s hot take this week that Alex Ovechkin deserves criticism for “drunkenly rolling around in a public fountain” or his infamous “gotta ask the question” unfounded steroid speculation about Jose Bautista.

That doesn’t mean Cox and others with hot takes deserve everything that’s said to them, and some people certainly cross the line in their responses, but it does make their situation a bit different than Melinda Karlsson’s. Oh, and it’s notable that Cox’s take blew up on Twitter, and he defended it by claiming he was misquoted when he really wasn’t (it wasn’t a direct quote, and the full context of his quotes wasn’t included, but his meaning was represented, and the full context doesn’t make him look better):

Gonna have to disagree with that one.

Given some thought to this @Sportsnet If Damien Cox isn’t relieved of his contract after saying this it would be awfully disappointing. There are children who have committed suicide after being bullied. This should not be taken lightly. His statement is ill informed & ridiculous https://t.co/TaO5y8HKtF

“You can only be murdered if you allow yourself to be murdered.” Damien Cox (probably) https://t.co/DhEIXXLs6h

Dunno. Ask the guy who made it up. https://t.co/4p4koELNew

It’s not so great to claim that’s “made up” when there’s audio and video of you saying pretty much that:

Since Mr. Cox is saying I misquoted him, here’s his extended quote, verbatim, on cyber bullying.

Funnily enough, I can’t respond directly because he blocked me.

You tell me if I misquoted him. pic.twitter.com/Lg53NlZKSM

I sent him this video after seeing a tweet that said you made it up. He hasn’t replied yet. pic.twitter.com/sM1htp3Lw0

Cox tried to further defend his comments on Thursday’s edition of Hockey Central At Noon, but didn’t really say much more notable there. He thinks avoiding Twitter is a way to avoid cyberbullying. Great, and technically true, but again, not really the issue here.

At any rate, Sportsnet certainly isn’t to be faulted for an anti-cyberbullying initiative. That’s a good thing, and maybe it will help. But the timing of this is far from great, coming in the same week as one of their most prominent personalities created controversy with cyberbullying comments seen by many as ill-informed at best and downright offensive at worst.