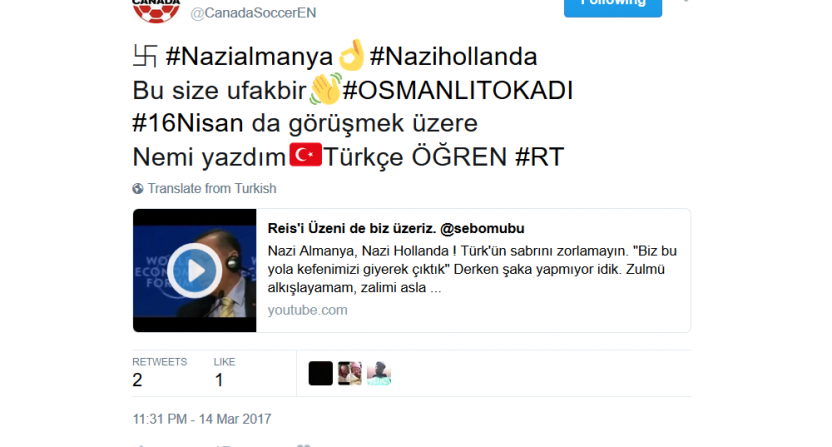 Those on Twitter around 3 a.m. Eastern Wednesday morning saw something really weird, with hundreds of verified accounts from across the world all tweeting out the same Turkish message comparing the Dutch to the Nazis. That included plenty of sports teams and organizations. Here’s one of the tweets, from German soccer team Borussia Dortmund (the timestamp is Pacific Time): 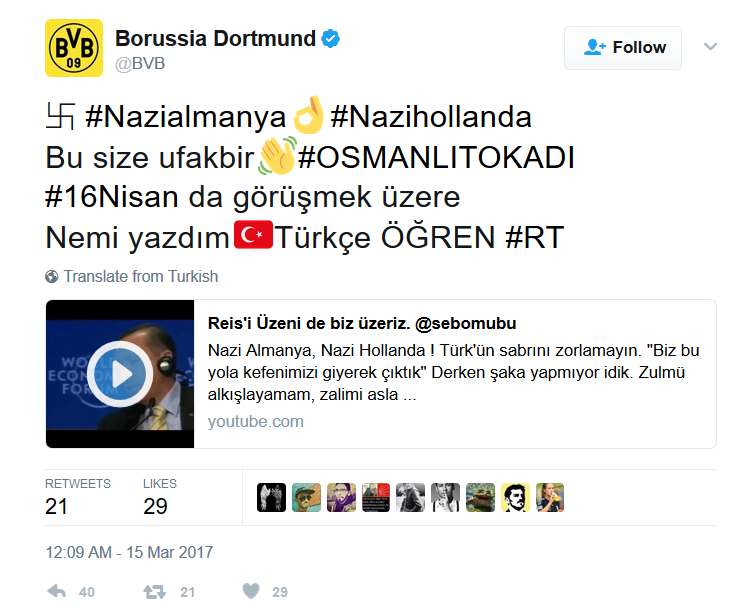 Other sports organizations hit included the Canadian Soccer Association (seen above) and the University of Texas’ baseball team: 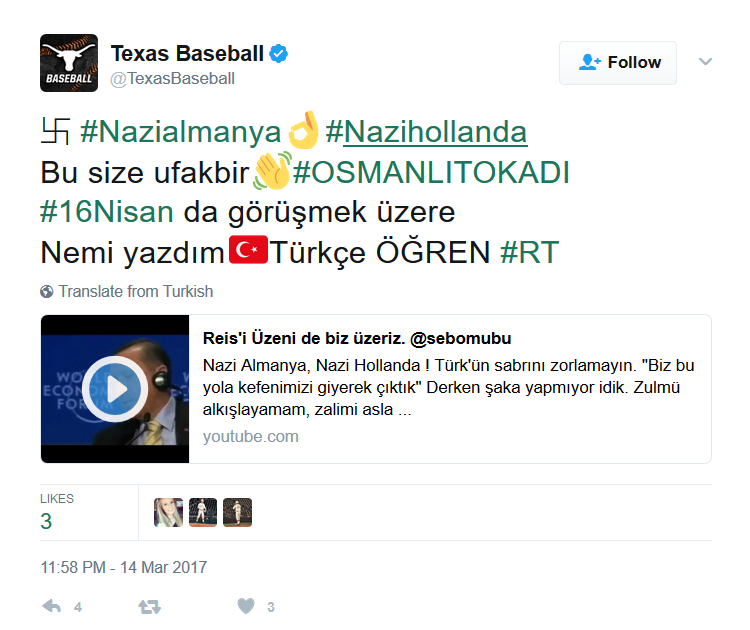 There were plenty more on the sports side too, including the NHL Network, Boris Becker, Mayweather Promotions, Nike Spain, Kansas Speedway, Baseball Canada, the Ottawa 67s junior hockey team, and the Terry Fox Foundation. Beyond that, media outlets like Forbes were hit, as were the European Parliament, Amnesty International, the U.S. Embassy in Manila, and Unicef USA. The hack appears to have impacted thousands of accounts, all of which were made to tweet this same message. Alex Hern of The Guardian tweeted that it may have been thanks to TwitterCounter.com:

To non-Turkish speakers, it’s unclear exactly what this message is, but it appears to be related to the ongoing tensions between Turkey and the Netherlands. The Netherlands stopped two Turkish ministers from addressing expatriates Saturday (ahead of a Turkish referendum to further expand president Recep Tayyip Erdogan’s powers), and that led to Turkey accusing the Dutch of everything from “Nazi tactics” to failing to protect Muslim men during a massacre in Bosnia in 1995 to being a “banana republic”. Diplomatic tensions between the two countries are high, and both have critical votes coming up; that Turkish referendum is on April 16, but Dutch voters are going to the polls today, and the anti-Islam Freedom Party has been making a push there.

In any case, these hacked tweets seem to be expressing some of Erdogan’s comparisons of the Dutch to the Nazis. The hackers certainly managed to get their message out through a ton of different Twitter feeds, from sports accounts to media ones to charities and governmental accounts, but whether that will lead to a result they were hoping for is debatable. They definitely managed to make Twitter an even odder place than usual Wednesday morning, though.