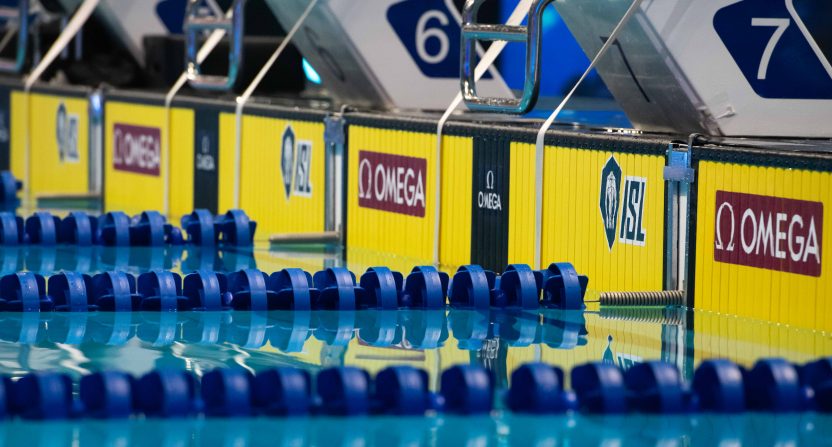 The sports calendar’s looking a little slimmer than normal for November at the moment following the shifted NBA and NHL seasons. But there’s an interesting international event going on in Budapest, Hungary, and it’s one of very few international sports competitions being held this year. That would be the International Swimming League, which is in its second year of operation, and has been putting on a lengthy bubble with 250 athletes over the past two months.

Last year, the ISL held events in seven cities around the world. That isn’t possible this year thanks to the COVID-19 pandemic, but they’ve managed to still hold a full season in a bubble in Budapest. Famed swimming commentator Rowdy Gaines has been there for the past six weeks, working as an analyst for broadcasts alongside play-by-play voice Bernie Gunther. Gaines spoke to AA last week about the experience and what to expect from this week’s upcoming Grand Final (which will air from 8 to 10 a.m. Eastern Saturday on CBS Sports Digital, and from noon to 2 p.m. Eastern Sunday on CBS Sports Network), and said this has been a terrific event despite the limitations imposed by the pandemic.

“It’s going great. I’ve been here five weeks, and it’s been absolutely flawless as far as everything is run. …I feel safe. We get tested every four to five days, the whole mask thing is in place, there’s mask police at the facility, at the swimming pool.”

Gaines said the lockdown protocols aren’t as strict as we saw for some things like the NBA bubble, but the athletes involved have been responsible, and they understand how unique it is to get this kind of opportunity to compete at a high level amidst this global crisis.

“We’re not really supposed to leave the hotel; it’s not like we’re on lockdown or there’s a cop downstairs or anything preventing us from going outside, but everybody kind of understands that this is a gift to the sport, a blessing. Our sport, it’s not the NBA or the NHL, so when something like this does come along, I think we all understand.”

“We get it, you know. We don’t have this. To be able to have this gift come to us, we should treat it that way, and treat it with respect. I don’t want to get too corny, but I think that’s the way everyone’s feeling.”

Gaines said the ISL season has been particularly important this year thanks to the Summer Olympics, normally swimming’s biggest stage, being postponed until 2021.

“Without the Olympics, [the ISL] definitely helped our sport this year. We’re not going to beat any of the major sports. We’re not going to beat even tennis or golf big events where the ratings are high. But, you know, our athletes are pretty good. And in the Olympic Games, especially from the United States side, we’ve been number one in the world of swimming for 64 years. I think 1956 was the last time that we were not number one. So our sport has certainly had a tradition of excellence across the globe, as have the athletes from the U.S. But I think all the athletes understand that the Olympics is really the only time where they get to shine, regardless of what country they’re from. And being able to shine a little bit right now is a blessing, especially in the fall, when swimming normally really gets put on the shelf.”

That Olympic postponement has been tough to take for many athletes. Gaines said he can relate a little bit, as he missed the 1980 Summer Olympics thanks to the U.S. decision to boycott that event over the Soviet invasion of Afghanistan.

“It’s a little bit apples and oranges, but I can certainly empathize with them. I did have the Olympics that I didn’t get to take part in either in 1980. I’ve probably been on 50 or 60 Zoom calls with different clubs and high schools and even pro teams over the last seven or eight months, because I think the coaches think ‘At least you can relate a little bit.’ But for me, it was just a matter of a career. Now it’s life or death. So it is different.”

“But I still went through the feelings of denial, like we all go through, and anger. And finally you go through this grieving period. And then on the flip side of that, where I think everyone has come out over the last few months, and I did too, is in acceptance. And you end up being motivated. And either you’ve got to be motivated or you’re going to stay in that depression stage and you’ll never make it next summer. And the people that come out of that depression and accept it and get motivated will be the ones winning gold medals next summer.”

On the motivational front, Gaines said he thinks it’s vital for many of these athletes to get in the water and test themselves against high-level competition, and that’s what the ISL is providing.

“I think it’s really important to race in our sport,” he said. “Especially in swimming, there’s no substitute for getting on the blocks and racing against the best. You can train all you want to. And some of the athletes here haven’t missed a beat, but others were out of the water for a long time. I think this is critical. I think the athletes here are going to benefit from this next summer, no question, because they’ll know each other and they’ll know their different nuances, they’ll know the way they compete. The fear will go away stepping up on the blocks against Caeleb Dressel because ‘You know what, I’m Tom Shields, and I took Caeleb down the first week!’ So I think it will help a lot of those athletes to know ‘I stepped up against the best and at least raced them. Maybe not beat them, but I raced them.’”

And Gaines said this event stands out as the only high-level international swimming event going on this year, and one of the few international events across sports.

There certainly are a lot of impressive swimmers involved, including Dressel (who won eight medals, including six golds, at the 2019 World Aquatics Championships, and who set a world record in the 100-meter individual medley at the ISL semifinals this past weekend) and Lilly King (who won two golds at the 2016 Summer Olympics and has been a force in the ISL). Both Dressel and King swim for the Cali Condors, who were the only team to go undefeated this season and earned a spot in the Grand Final with a dominant 605.5 point showing in Monday’s semifinal. They’ll be joined by the LA Current, the London Roar, and the Paris-based Energy Standard, all of which Gaines predicted last week.

“I think it’s destined to be two American teams and two European teams, which will certainly be great for the swimming television audience in Europe and in the United States. I think Cali and LA look very good and will be very tough to beat. Especially Cali, because they’ve got Caeleb and Lilly [King]. When you’ve got the best male swimmer in the world and certainly the best female breaststroker in the world, she’s pretty much unbeatable when she’s ready to go, that’s going to be tough to beat. Plus they have a lot of great depth. And on the European side, I think it’s going to be the London team, which is great because this is showing live on the BBC every time we show it, and the Energy team, which is a French team. I think it’s destined to be those two. And I think you’re going to see world records.”

A WORLD RECORD in the 100 Fly to start the @Iswimleague Finals!

You DON’T want to miss the FINALS tomorrow at Noon on @CBSSportsNet! pic.twitter.com/zs0K7qm4yJ

Gaines wasn’t involved with the ISL last year, but he’s been very impressed with it in its second season, and thinks the athletes are as well.

“This year versus what I saw and observed last year is completely different, because I believe swimmers are more secure in believing this is going to be something that’s not going to go away. I think everyone kind of thought of it as an anomaly last year, like a new spring football league. That’s not what it is. It’s not going away. I think the man behind it [Ukranian billionaire Konstantin Grigorishin], I don’t know him, I met him once, but I think he’s committed to it. He loves the sport of swimming. I’ve heard he has this huge business and he spends 90 percent of his time on this. He loves this; it’s his passion. So it’s not going anywhere.”

And while Gaines has loved his time in Budapest, he’s also trying to get the ISL to consider U.S. locations for next season, including possibly Orlando.

“Budapest has been unbelievable. If we came back here next year, it’s a slam-dunk win. It’s the nicest facility in the world, the nicest facility I’ve ever been to. The hotel’s a mile away, we walk to the pool, so it’s a perfect situation. But I do think it would be really cool to have one in the States. There are big ifs, though; if we’re still in a state like we are now, if we need to do a bubble-like format, there’s a lot of ifs in that. But that’s my goal.”