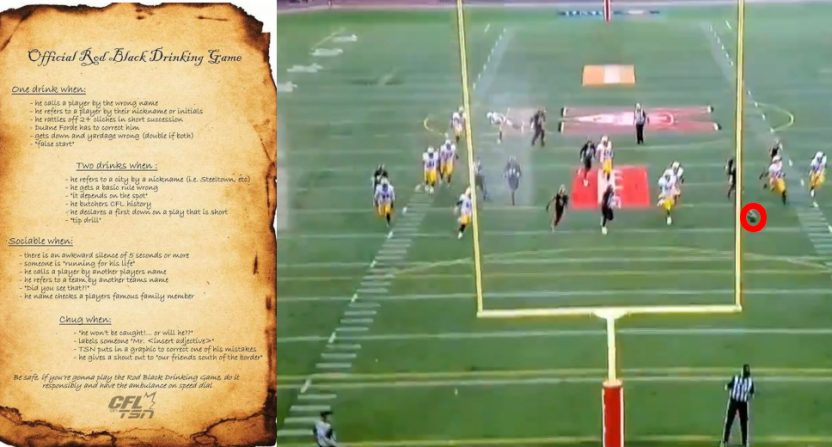 While these days often see us covering carriage negotiations, business and personnel moves, viewership and more, there are times where it’s worth just going with the name of this site and writing about some awful announcing. A CFL game Saturday between the Montreal Alouettes and the Edmonton Eskimos provided a nice example of that, and we’re betting a lot of American viewers haven’t seen this one yet (it was only aired on ESPN+ in the U.S.). Here’s TSN announcer Rod Black with a “Right down Main Street once more. But it’s wide!” call on a third-quarter Edmonton field goal attempt from Sean Whyte that Black thought would be good, but that turned out not to be:

That call’s pretty funny in its own right, but what really elevates it is the identity of the announcer in question. Black is a long-time sports figure in Canada (his TSN bio mentions “30 years as a sports journalist”), especially around the CFL and figure skating, but he has some predictable tendencies when it comes to the CFL in particular. And that’s led to long-running Twitter discussion of “The Rod Black Drinking Game” when he’s announcing. Here’s one of the nicer-looking codifications of it, from back in 2014 (this is one of the earliest tweets on it, but it was likely posted on forums before that):

Unfortunately, nothing in there specifically corresponds to calling a missed field goal good. Depending on your interpretation, it could be close to either declaring a first down on a play that’s short (two drinks) or “he won’t be caught…or will he?” (chug). In any case, the Alouettes would go on to win this game 20-10, part of a remarkable win streak they’re on despite an ownership change and the firings of both their head coach and their general manager.

At any rate, this isn’t the biggest mistake in the world or anything, but it’s a funny one, and it’s as good as an excuse as any for us to bring up the Rod Black Drinking Game. Those U.S. viewers interested in joining in can do so all season long, as every CFL game is again on ESPN’s networks or ESPN+ with TSN’s announcing teams, and Black will be calling a lot of those. But as the graphic notes at the end, “Be safe; if you’re gonna play the Rod Black Drinking Game, do it responsibly and have the ambulance on speed dial.”