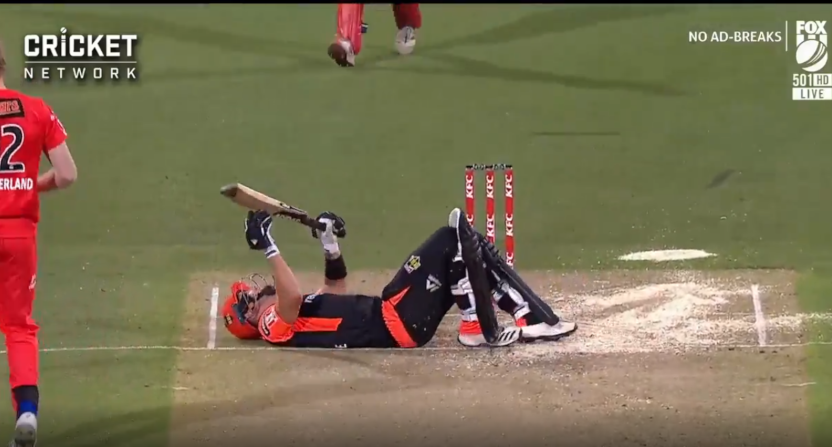 We do see some shots to the groin in sports from time to time, and that sometimes leads to interesting commentary from announcers. Well, the latest example of that came from Australia’s Twenty20 cricket Big Bash League Tuesday, where Perth Scorchers player Liam Livingstone was hit in the groin twice while batting against the Melbourne Renegades. Livingstone was miked up for this one by the Fox Cricket broadcast, and that led to his wincing being quite audible on the broadcast, and to the broadcasters laughing about it. Here’s the first hit he took, from Melbourne bowler Richard Gleeson during the third over:

It didn't all go Liam's way in that over… OUCH #BBL09 pic.twitter.com/NfmOcSY9XT

Two overs later, Livingstone got hit in the groin again while batting (the third time overall he was hit on the night), this time by Will Sutherland. And that led to an “OH NO!” from him, and to further laughter and wincing from the broadcasters, from Michael Hussey’s “He might not get up from this” to Callum Ferguson’s “Dear, dear me”:

Funnily enough, the “Oh, no!” reaction isn’t even unprecedented on a broadcast; CBS analyst Tony Romo yelled the same thing when Mike Glennon took a snap to the groin in 2017. But after the game (which Perth won, besting Melbourne’s total of 170 with one over to spare, and with Livingstone posting a team-high 59 runs on 39 balls with four sixes and three boundaries), Livingstone had quite the comments of his own:

“I wouldn’t advise getting hit in the same place twice. Yeah, they’re a little sore, but I’m sure I’ll get over it.” That clip’s also great for commentator Mel Jones saying (over footage of Livingstone launching a massive six) “I hate to say, there’s been two massive blows in this over, and I think he preferred that one.” Indeed, he probably did. But this broadcast is a work of art, right up there with Hans Moleman Productions’ “Football In The Groin.”