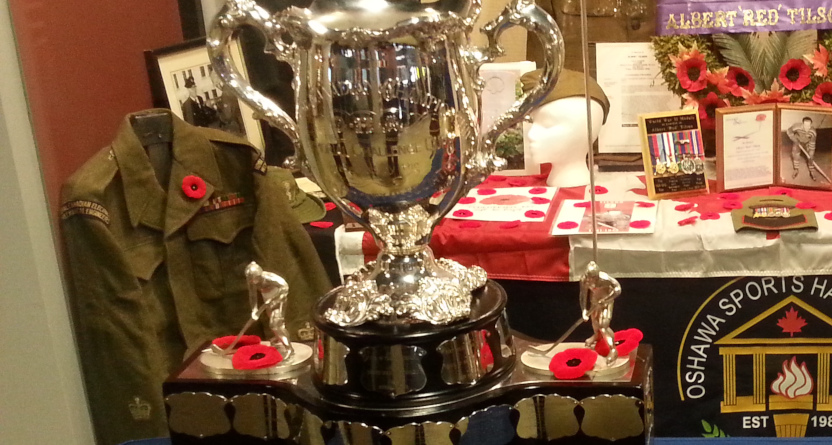 Most of the sports tournaments and championships taken down by the COVID-19 pandemic in the spring of 2020 found a way to hold their events later in 2020 or early in 2021, and even some cancelled altogether (like the NCAA 2020 men’s and women’s basketball tournaments and spring championships) have since come back of the 2021 version. But the Memorial Cup (trophy seen above in 2019 , the four-team championship involving the champion of each of the three major junior hockey leagues (the Western Hockey League, Ontario Hockey League, and Quebec Major Junior Hockey League) and a host, now won’t be played for a second consecutive season.

The Canadian Hockey League (the umbrella organization over those three leagues; it’s not a league itself) announced the cancellation of the 2021 Memorial Cup (which had been scheduled to be hosted by the OHL in either Oshawa or Sault Ste. Marie, Ontario) Tuesday. The WHL and QMJHL are in the middle of playing seasons, with the WHL’s shortened and incorporating divisional hubs and the QMJHL’s also only involving play within divisions, but the OHL has not been able to play yet thanks to provincial governmental regulations. That, plus the challenges with bringing championship teams together from across Canada (and potentially from across the U.S. as well; both the WHL and OHL include American teams), likely figured into this cancellation. Here’s the CHL’s statement on this move:

“The CHL is committed to the health and safety of our players, their families and billets, our teams, staff and officials, and the communities in which we play. That has driven all of our difficult decisions for the last year as we have dealt with this global pandemic,” said CHL President Dan MacKenzie. “The decision was made based on the limitations on travel, border restrictions, and quarantining requirements that would make it impossible to produce league champions.”

The Memorial Cup is steeped in tradition and is one of the most difficult trophies to win in all of sport. The CHL looks forward to presenting it next season to the championship club that has earned the right to hoist it.

Further decisions regarding the timing and location of the 2022 Memorial Cup will be announced at a later date.

This cancellation is quite significant, especially with it being the second-straight year the tournament was cancelled. Yes, the WHL and QMJHL are going to continue keeping on, and they’ll likely still have their league championships (and perhaps the OHL will as well if it’s able to play at a later date), but the lack of an overarching Memorial Cup is rather different from the norm. Until 2020, that cup had been awarded every year since its 1919 inception, continuing even during Canada’s 1939-45 participation in World War II. So it’s remarkable to see it not given out for two straight seasons. And that’s a loss for Rogers Sportsnet (which has the national broadcasting rights to the CHL through 2025-26, showing more than 50 games each year between regular-season play, league playoffs and the Memorial Cup), for major junior players looking to improve their draft stock or their status with teams who already drafted them during Memorial Cup play, and for fans hoping to watch the best teams from each major junior league face off.

At the same time, though, there’s definitely some logic behind a move like this. Canada as a whole is facing major COVID-19 challenges at the moment, with the country topping the U.S. in cases per million on Friday for the first time since the pandemic’s early days. And late last week, the American Centers for Disease Control and Prevention elevated their warning on Canada to Tier 4, “travelers should avoid all travel to Canada. ” That warning applies even for the fully-vaccinated. So that would pose a huge problem for the Memorial Cup if an American team was to qualify.

Perhaps the even larger problem for the event is that the OHL hasn’t started yet and has no clear path to starting. That’s even more true with Ontario recently going back into severe quarantine restrictions. And the Memorial Cup can’t easily be reformatted to leave out one league, especially with that league supposed to act as the host this year. Also, even “bubble” events in Canada like the World Curling Championships in Calgary have hit major COVID-19 issues, so trying to pull off a Memorial Cup at the moment feels incredibly difficult.

The CHL also isn’t the only Canadian sports body that’s hit issues in trying to resume play amidst COVID-19. Canadian MLB, NBA and MLS teams all relocated outside Canada for play last season and this season, and the Canadian NHL teams are playing in an all-Canadian division (which has its own giant issues thanks to the team-wide outbreak with the Vancouver Canucks). U SPORTS, the governing body for Canadian university athletics, canceled its championships last spring amidst the initial outbreak (some mid-event), and largely hasn’t resumed play since then (some teams and some conferences have done some limited play, but there have been no national fall or winter championships). And the Canadian Football League didn’t play in 2020 (marking a pause for another long-running trophy; the Grey Cup had been given out continuously since 1919), and while there’s plenty of talk about a CFL season this year, that’s far from a sure thing (especially given the uncertainty around whatever their talks with the XFL mean).