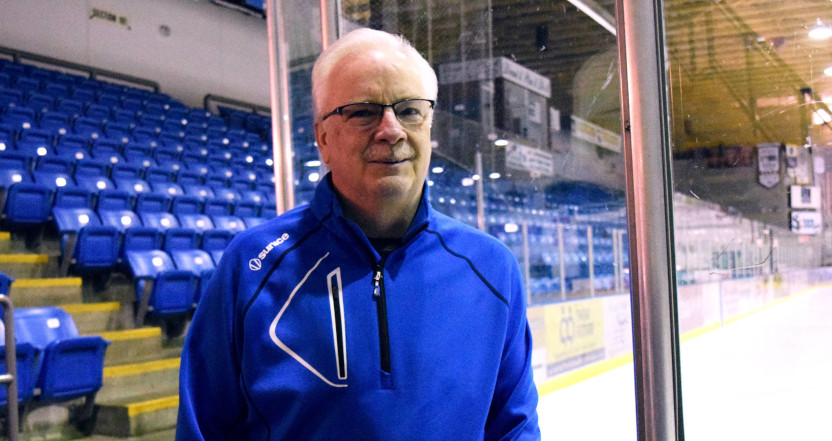 Asking “Does he speak English?” about a player on the other team went very poorly for Alberni Valley Bulldogs colour commentator Bruce MacDonald Friday night. The Bulldogs, a team in the Junior A British Columbia Hockey League, were facing the Langley Rivermen in a playoff game, and Rivermen forward Owen Kim got involved in an altercation with a Bulldogs player after a whistle. That led to MacDonald making quite the remark about Kim:

I don’t care what anyone says, this is inexcusable. Do better. https://t.co/eELn0Pp29H pic.twitter.com/EpLknF0s93

MacDonald says “Aw, Kim, give him a break. Get on a ladder and talk to him. Anyway, push the pace, they’re going to draw penalties for sure. Does he speak English? Maybe that’s the problem.” Play-by-play voice Evan Hammond immediately chimes in with “Okay, come on now, that’s too far,” and MacDonald does say “Okay, that’s wrong, that’s too far,” but the damage was done. And, as per a BCHL statement issued Friday night, MacDonald (who had been the Bulldogs’ colour commentator since at least 2018) was removed from the broadcast shortly after this by the team, and has been banned from future league broadcasts:

Alberni radio station The Peak, which carried this broadcast, put out its own statement Friday:

And late Saturday morning, MacDonald put out his own apology:

The apologies are all well and good, and it is notable that MacDonald is actually offering an apology that recognizes his error, rather than “I’m sorry if I offended” we see so often. But it’s still mind-boggling that a commentator at any level, much less Junior A, would think it’s acceptable to throw out a “Does he speak English?” in 2022. (And the player in question was born in North Vancouver, B.C., so this assumption seems to be about his ethnicity and last name rather than any sort of international status.)

And it’s troubling to see comments like this still happening in hockey, and maybe especially on broadcasts of high-level junior hockey. Hockey in both Canada and the U.S. has often had only limited participation from racial minorities, and many of the minority players who have made it to high levels have spoken about the incredible abuse they took on the way up. (And it’s notable that there are plenty of remaining issues at the NHL level, too, around both race and sexual orientation.) It should be very obvious at this point that “Does he speak English?” is not an acceptable remark about a player.

This situation was impressive for the quick reactions from a variety of sources. Hammond deserves credit for immediately challenging MacDonald on this and pointing out that he was over the line; that’s not an easy thing to do with a broadcast partner, and most of the awful remarks we see on broadcasts aren’t immediately challenged. The league and the team also deserve credit for pulling MacDonald before the end of the broadcast, and for getting out a quick statement here on their response.

But this still is something that shouldn’t be happening in 2022. And maybe the immediate consequences here for MacDonald will get other broadcasters to wise up, but maybe they won’t.  At any rate, this does seem like proof that there’s still a long way to go before we can really say “Hockey Is For Everyone.”