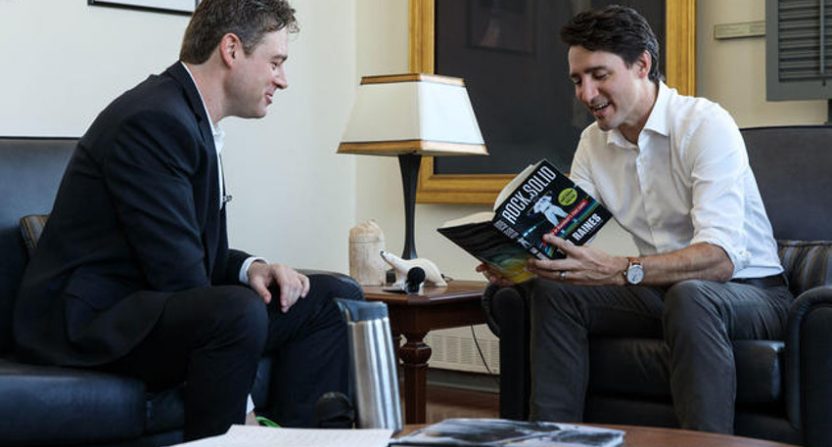 Writers once affiliated with Grantland have now landed podcast interviews with two different heads of state. Grantland founder Bill Simmons famously had his chance to interview Barack Obama during the 2008 campaign nixed by ESPN, but managed to interview Obama for his podcast in March 2012 (and later, after Simmons had his contract not renewed by ESPN, he interviewed Obama again for GQ in November 2015). (Also, it wasn’t for a podcast, but Grantland’s Rembert Browne interviewed Obama for that site in March 2015.) Now, ex-Grantland writer Jonah Keri (currently of CBS, SI, MLB Network, Sportsnet, Nerdist.com and more) has interviewed Canadian Prime Minister Justin Trudeau for his own Jonah Keri Podcast, and they touched on plenty of sports and sports-adjacent issues, including the Montreal Expos (which Keri wrote a book on, you know) and journalism. Here’s the full podcast:

From a sports perspective, the most notable part here may be the discussion of the Expos, which starts around 5:20. Here’s the transcription of the key parts of that, via Keri’s CBSSports.com piece, which started with Keri presenting Trudeau with an Expos cap and a signed copy of Tim Raines’ book. Trudeau said the Expos’ hat reminded him of people keeping hope alive there would be major league baseball in Montreal again:

PM JUSTIN TRUDEAU: I see these. I see these all the time, well not all the time, in crowds, like people come out, they’re wearing them. I see you’ve got the Expos socks. It just, it’s something that always, I mean it’s nice to see the Habs jersey, or the Alouettes, but seeing the Expos cap, is, you know, people keeping hope alive.

JONAH KERI: And how big was that for you as far as sports fandom. You moved to Montreal as a teenager, right? And we’re almost exactly the same age. [Tim] Raines, [Andre] Dawson, [Gary] Carter, those are my formative guys. How was it for you?

PM JUSTIN TRUDEAU: It was, you know … It’s funny because my father was never a big sports fan. There’s famous stories about how my father would bring us to the Grey Cup and Premier Bill Davis was the one who had to explain to us what football was as 5-year-olds because my father was not a big sports fan, with the exception of baseball. For him, baseball was his sport and it was really important for him to bring us to games because as a kid it was one of those things that he had bonded with his dad over. He was affected all his life because his dad actually died when he was only 15 years old and it left a huge gap in my father’s life, for his entire life. But baseball was really important to my grandfather because he was one of the part-owners of the Montreal Royals, where Jackie Robinson got his start. And it was all sort of part of family lore for us. So for my father, it was really important. We’d go out to the Big O and watch games there. And Andre Dawson, Gary Carter, Tim Raines were my sports heroes at that point because we didn’t have a lot of sports heroes but those were the three that really popped for me.

JONAH KERI: And I also tend to brag on my hometown a lot. I think everybody does that, wherever we’re from. And I’m born and raised in Montreal, I didn’t move to the States until I was graduated from Concordia, and in your case as we said, you moved there as a teenager. What was that like? For people trying to kind of visualize, what’s life in Montreal like? Growing up in the ’80s/’90s? What are those formative experiences for you? What did you take away from it?

PM JUSTIN TRUDEAU: It was mid- to late-’80s high school and into university early ’90s, they were years of … Montreal was, the Montreal Canadiens were still winning Stanley Cups every few years or so it seemed.

JONAH KERI: That was fun, when Canadian teams used to win the Cup.

PM JUSTIN TRUDEAU: Exactly! I remember the ’86 parade because we were in school and … it was great.

It’s interesting that baseball mattered so much to both Trudeau and his father (who was Canada’s prime minister from 1968-79 and again from 1980-84), and the comments on Davis (premier of Ontario from 1971-1985) teaching the younger Trudeau football are also notable; the elder Trudeau certainly wound up involved in Canadian football, from ceremonial kickoffs to appearances in questionable attire to insisting that the 1969 Grey Cup go ahead in Montreal despite terrorist threats, so it’s funny to hear that he wasn’t really a fan of the game.

On a more serious note, the discussion of journalism and what government can or cannot do to support it near the end of this (55:55) is also notable. Trudeau declines to go into many specifics, saying the minister of heritage (Mélanie Joly) is leading consultations on that issue, but offers a broader perspective that “having a free and independent media is essential to any viable democracy. You cannot have power run unchecked by the media, a media that is willing and able to inform the public about what is going on so they have a better ability to hold governments to account at the ballot box. You cannot have a democracy without an informed knowledgeable electorate, and the media need to play a huge role in that.”

Trudeau then talks about some of the issues facing journalism, including filter bias and consumers’ reluctance to pay for specific journalism, and says journalistic questions are for society as a whole to answer as well as government. “There’s also a deep reflection that society has to have about how much do we value an independent media, and are we willing to pay for it one way or another, through advertising or clicks or subscriptions or paywalls or buying actual newspapers? …It’s not an easy question, obviously, but I would certainly hope that citizens are also understanding we all have a very, very real role to play in this.”

There’s nothing specific there, but Trudeau’s thoughts on the issue are certainly notable, and his government’s eventual action or lack there of will have an impact on Canadian sports fans. There’s perhaps even more of an impact from the political side in Canada thanks to government funding for the CBC (which is partially government-funded, partly ad-funded), and thanks to CRTC restrictions on a percentage of Canadian content impacting TV and radio broadcasters. And Canadian newspapers, radio and television stations have all seen massive layoffs and buyouts recently. So, while Trudeau may not have committed to anything specific here, it’s interesting to hear him talk about it. The whole episode is a good listen, both for the sports issues discussed and for everything else brought up.