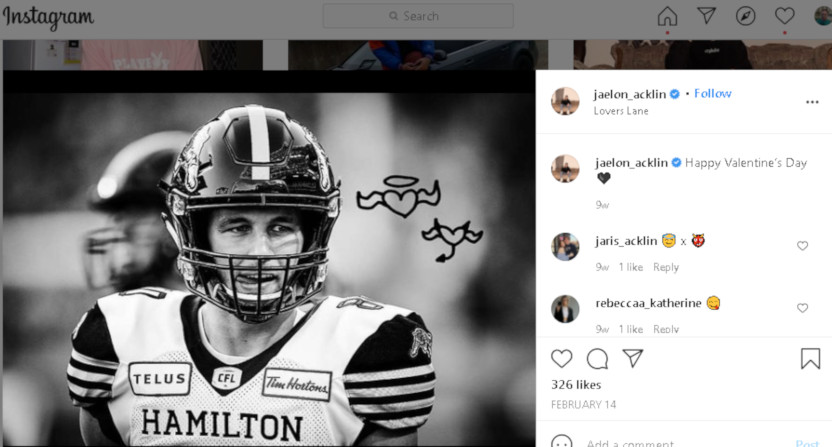 Earlier this week, the Canadian Football League announced shifted season plans, changing its planned start from June 10 to August 5 due to continued challenges with the current “critical” stage of the COVID-19 pandemic in Canada. It had been widely anticipated that the CFL wasn’t actually going to be able to pull off a June 10 start, but what exactly a season shift would look like was very much up for debate, especially with the league having ongoing talks with the new XFL ownership group (even if claims of cancelled 2021 and 2022 CFL seasons and a full CFL-XFL merger are still very premature). So the announcement of an August start date that currently seems at least somewhat possible (although far from assured) was likely good news for a lot of under-contract CFL players trying to plan out what’s ahead for them. The particular timing of this plan was not good for Hamilton Tiger-Cats receiver Jaelon Acklin, though, as he told Steve Milton of The Hamilton Spectator:

“The timing is impeccable,” the 25-year-old Hamilton Tiger-Cats sophomore receiver says, with a heavily-ironic laugh.

“I feel great about it because I finally get to play some football. But, I’ve been waiting so for long for the CFL to say something and when they finally did, I was actually kind of bummed out for just a moment,” he said.

“I haven’t had any plans for two years and just when I do, the very next day the CFL drops that on me!”

The plans Acklin notes there were appearing on an upcoming Bachelor-style reality dating show called Leap of Love. As per Milton’s piece, last week, a talent scout from Burbank-based Cornwell Casting noticed Acklin’s Instagram profile and reached out to him about the Leap of Love show, an in-progress show they’re working on. It’s set in a European castle, and one twist is that contestants will have no cell phones throughout the show. Here’s Cornwell Casting’s promo video for that:

Acklin spoke to a representative for the show this week, and was picked for it, with filming set to take place in Europe this July and August. But the CFL’s season announcement shift meant he then had to back out. He told Milton while he loved this chance, he’s more eager to get back to football:

“I was made for that show. But I’d much rather be in Hamilton working with my teammates than on a reality TV show. I’m so glad to get back to play.”

Acklin, 25, shone in college for the Western Illinois Leathernecks from 2014-17, then signed with the NFL’s Baltimore Ravens as an undrafted free agent. But the Ravens cut him after that training camp, and he didn’t catch on elsewhere. He came north of the border to join the Ticats in 2019, impressed in the preseason, was signed to the practice squad, and was elevated to the main roster after an injury to star receiver Luke Tasker.

Acklin wound up playing in 16 regular-season games (out of the team’s total of 18) in 2019, plus the East Final (a 36-16 win over Edmonton) and the Grey Cup (a 33-12 loss to Winnipeg), and he caught 57 passes for 701 yards and three touchdowns during the regular season, plus eight more passes for 133 yards in the playoffs (including five catches for a team-high 88 yards in the Grey Cup). He was voted Hamilton’s Most Outstanding Rookie that year, and looked to be set for great things in the CFL and possibly beyond. But the cancellation of the 2020 CFL season due to the pandemic meant he didn’t get a chance to prove anything further last year, so it’s understandable why he’s eager to play.

Hopefully the 2021 CFL season will start as planned and this will wind up being a good call for Acklin. If it winds up getting pushed further, that’s going to be awfully unfortunate. Skipping a trip to a European castle for a reality show is tough enough already, but that’s rougher still if it winds up being in favor of a season that doesn’t wind up happening as planned.

[The Hamilton Spectator; photo from Jaelon Acklin on Instagram]