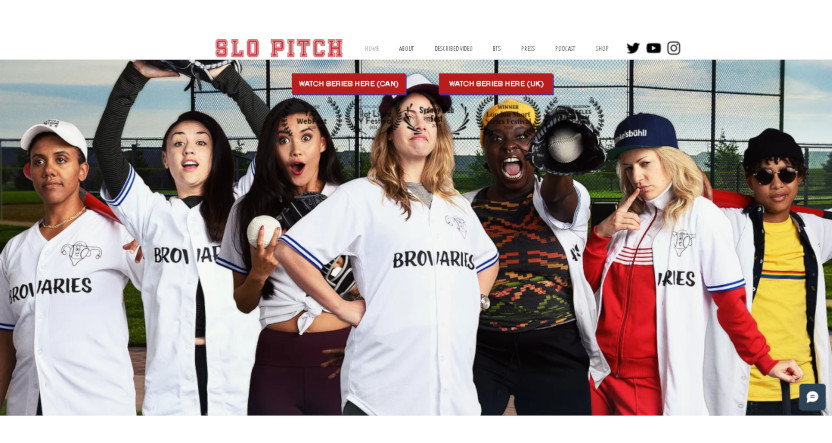 The combination of baseball and comedy already proved successful for IFC with the four-season run of Brockmire, and now the channel is bringing a digital  softball comedy series to American viewers. The series in question is Slo Pitch, which had focused on the stories of LGBTQ women and non-binary players on a bad softball team. It began as a web series viewable on Canadian channel OutTV‘s streaming product, as well as Apple TV and Amazon Prime Video in Canada, but is expected to air on linear OutTV this year as well, and has also added UK distribution on Froot.tv. Now, as per Kate Feldman of The New York Daily News, the first two seasons (season one is already done, season two will be shooting this summer) have been picked up by IFC in the U.S.:

Here’s more on the series from co-creators (along with J Stevens, who also directs) and stars Gwenlyn Cumyn and Karen Knox in an interview with Bridget Liszewski of The TV Junkies last July:

TTVJ: We’ve seen a lot of different sports stories told on screen. Besides the fact that this is slo-pitch, how does this series differ from so many others we’ve seen?

Knox: One of the big reasons why Gwen and I wanted to make this show is because there’s a big lack of shows about women in sports. There was a show called Pitch about the first woman to play in Major League Baseball, but it was about a woman in a man’s world. We just wanted to do a show about a softball team that happened to be mostly female and mostly queer.

Knox: Lesbians and sports is such a nice wine pairing.

GC: There also aren’t really any sports TV shows about amateur sports. That’s really fun especially because a lot of amateur athletes treat their sport with almost as much seriousness and dedication as pro athletes. That makes for fun comedy.

As per an Elle Canada piece last summer, too, the cast and crew have paid a lot of attention to representation:

The lack of Major League Baseball this season might be a disappointment to fans, but Slo Pitch is sure to be the tonic (or, uh, over-priced stadium beer) to fill the void. A digital mockumentary series, Slo Pitch features a fully female and/or non-binary led creative team, a key cast that is 50 percent BIPOC, 70% of the cast and crew identifying as female or non-binary, and 80% of key cast identifying as LGBTQ+. Coach Joanne (Kirsten Rassmusen) attempts to take her queer slo pitch team The Brovaries all the way to the championships of their competitive beer league – and it’s a hoot.

And Knox said more on that in the aforementioned TV Junkies interview:

Simply that the show exists is a political statement. The show is about a mostly female, mostly queer Slo-pitch team with broad racial diversity. We really did want it to be quite mainstream and the comedy to have mainstream broad appeal. Yes, creating niche content for niche audiences is very important because the specificity is the act of generosity for those audiences, but something that has a more universal language for an audience is also a gift because it makes content like this more mainstream in the zeitgeist. The possibility of a show that has lesbians, bisexuals, and gender non-conforming people as the heroes and providers of comedy is a way of mainstreaming those identities in more mainstream media.

This series certainly seems to have some potential, and it’s won plaudits in Canada and elsewhere. We’ll see how it does in the U.S. when IFC debuts it later this year.

[Kate Feldman on Twitter, The TV Junkies, screencap from SloPitchSeries.com]