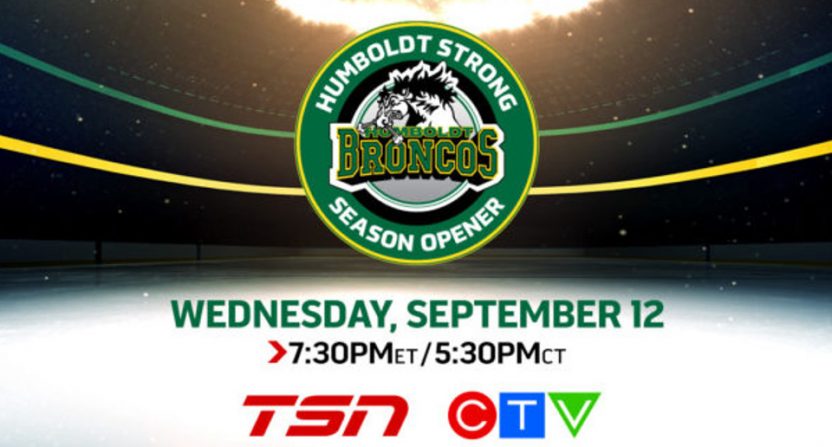 The April bus crash in Saskatchewan that killed 16 people associated with the Humboldt Broncos’ junior hockey team, including players, coaches, radio broadcaster Tyler Bieber and volunteer statistician Brody Hinz, sparked tributes and memorial awards from across the sports world. Since then, many of those who survived the crash but suffered major injuries are working to rebuild their lives, with notable stories like paralyzed player Ryan Straschnitzki taking up sledge hockey, and the team has also worked to rebuild, picking 10 up players from across the Saskatchewan Junior Hockey League in a dispersal draft in June. Now, the Broncos are set to to play their first game since the tragic crash Wednesday night, facing the Nipawin Hawks at home in their season opener, and that event will be broadcast live across both Canada (on TSN and CTV Saskatchewan) and the United States (a NHL Network simulcast of the TSN feed).Pre-game coverage of this game begins at 7:30 p.m. Eastern Wednesday on both TSN and NHLN, with the game itself beginning at 8:30 p.m. Eastern and a post-game on-ice ceremony following. Here’s more from a TSN release:

An hour-long pre-game show gets underway on TSN at 5:30 p.m. CT / 7:30 p.m. ET, featuring stories and interviews. The home opener will be followed by an on-ice ceremony in tribute to all those affected.Hosted by James Duthie, HUMBOLDT STRONG – HUMBOLDT BRONCOS SEASON OPENER features TSN’s acclaimed hockey broadcast team, including Hockey Insider Bob McKenzie, with play-by-play from Chris Cuthbert and colour commentary from Ray Ferraro. SPORTSCENTRE Reporter Ryan Rishaug reports from rinkside, with contributions from Senior Hockey Reporter Frank Seravalli.Including TSN Original features as well as a special encore of Tom Cochrane’s hit song Big League (For Humboldt), TSN’s pre-game coverage looks back at the April 6 tragedy, while also looking ahead to the future of the Humboldt Broncos and the community of Humboldt throughout the broadcast.The TSN Original features group has been spending time with the families and in the community of Humboldt for a documentary that is set to air on CTV and TSN later this year.

With the game approaching, there have been plenty of thoughtful tributes to Humboldt from across the sports landscape. For example, several provinces over, the Hamilton Tiger-Cats joined the many who put a stick out in tribute to the lost Broncos earlier this year:https://twitter.com/TSNScianitti/status/1039970507569946624And the Niagara Ice Dogs had their own tribute:

Our hearts 💛💚 are with the Humboldt Broncos tonight, as they play in their Home Opener.We got our room game-ready 🏒, for the boys who will be the 7th man on the ice. #HumboldtStrong pic.twitter.com/ilXg1i8wAz

16 sticks were also displayed outside the Humboldt arena’s front door:https://twitter.com/RyanBMcKenna/status/1039954556321325056Meanwhile, two of the players who were injured in that crash will be playing for the Broncos again, and TSN’s Ryan Rishaug detailed their stories:https://twitter.com/TSNHockey/status/1039651889950941185Former Bronco and current St. Louis Blues’ radio analyst Kelly Chase detailed his own thoughts in a Players’ Tribune piece:https://twitter.com/PlayersTribune/status/1039959329875492864And TSN broadcasters James Duthie and Chris Cuthbert shared their thoughts on calling this:

Inside the rink in Humboldt. Between the NHL and Hockey Canada, we broadcast hundreds of games a year on TSN. None will be as important to us as Wednesday night. 5:30ct, 7:30et, Broncos season opener. Commercial free.