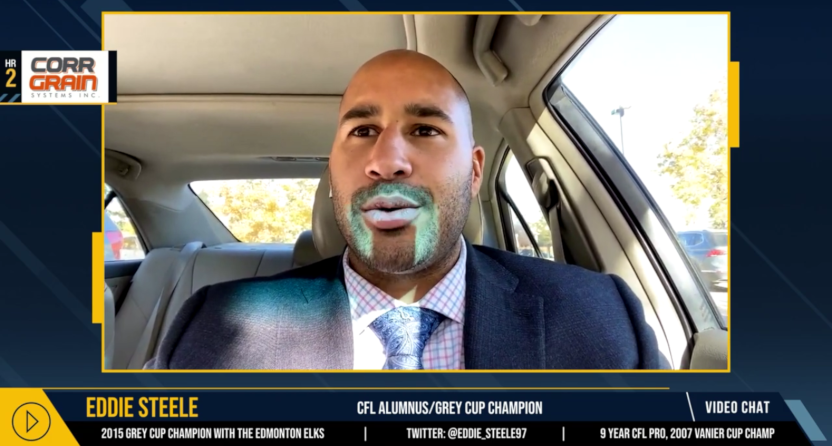 There have been some past cases of team analysts being let go for being too critical, and also some cases where coaches and GMs have unsuccessfully called for the removal of critical analysts. The latest case of a team analyst criticizing team management and then losing a job over it comes in the Canadian Football League, where former CFL defensive tackle Eddie Steele tweeted Wednesday that he lost his job (which he’d just gotten this year) as a game-day studio analyst for the Edmonton Elks’ radio broadcasts on 630 CHED after his comments last week:

Because of my coments last week I was let go from @630CHED doing the @elks broadcast. I realize my mistakes in the situation, however I 100% stand by what I said. It pains me to see the organization I love being operated this way. Ultimately I guess I wasn’t a “cultural fit” ?

What exactly did Steele say? Well, this appears to come from Steele’s appearance on The Rod Pedersen Show (a daily radio/YouTube/Game+ TV show hosted by Pedersen, who spent 20 years as the Saskatchewan Roughriders’ radio voice) last Friday, where he had quite the criticisms for Elks’ general manager Brock Sunderland. Here’s that segment in full, with the title indicating how Steele felt:

Some key quotes there, via 3 Down Nation:

“I think there is a major division amongst the players in the locker room that goes back to the whole COVID outbreak. You’ve got a lot of guys who are on opposite sides and they’re just really not playing together as a team, but it actually goes even higher than that.”

“I was on a radio show yesterday talking about it and it starts from the top down. Brock Sunderland, their GM, I think there’s some issues with him and just the way he conducts himself, the way he does business. It’s a trickle-down effect throughout the organization. Ultimately, he’s the captain of the ship and where he steers, the ship is going to go. I think he’s a major factor why we’re seeing the Elks in the situation that they’re in right now.”

Those are definitely some harsh criticisms, and it’s unusual to see a team analyst call out the general manager specifically. And Elks’ head coach Jaime Elizondo and defensive back Aaron Grymes pushed back on Steele’s comments after practice Monday, as Gerry Moddejonge of The Edmonton Sun wrote:

But Elizondo met the question of divisiveness head on following Monday’s first full practice of the week.

“I don’t think that’s the case at all,” he said. “I think that’s a media deal, we’ve talked about it as a group.

“I think sometimes when you are on the losing side of things, you’re always going to turn over every rock and try to find out if there is a cause or an issue. But I don’t believe that’s the case.”

A former teammate of Steele’s isn’t buying it, either.

“Are they in the locker-room?” asked current Elks defensive captain Aaron Grymes, who won the 2015 Grey Cup alongside Steele in green and gold. “Unless he’s talking to somebody that I don’t know … When I’m in the locker-room I don’t see the divisiveness, but maybe somebody sees it from a different perspective.

From the outside, though, there’s absolutely some merit to what Steele said. The Elks had high expectations for this season, but they’re now 2-5, last in the West Division and actually last in the entire league (the Ottawa Redblacks, who just beat them last Tuesday, are also 2-5,  but ahead in head-to-head record; their only wins this season came against the Elks). Past head coach Scott Milanovich, hired in December 2019, left them in January 2021 to join the Indianapolis Colts as a quarterback coach. They’ve also had the only CFL COVID-19 outbreak to postpone a game this year, with 13 positive cases. And when they released offensive lineman Jacob Ruby at the end of August, that was reportedly for misrepresenting his vaccination status. That’s fine, but that raises questions about how much checking they were doing on vaccination status that Ruby’s misrepresentation wouldn’t be discovered until almost a full month into the season, and after an outbreak that caused a postponed game.

What’s also interesting here is that Steele’s comments aren’t that far from the comments made by plenty of members of the media who don’t directly work for the team or their radio broadcast partner. For example, from that (unbylined) 3 Down Nation piece on Steele’s comments:

The Elks have been mired in controversy all season, with much of it linked back to Sunderland. Top paid head coach Scott Milanovich departed suddenly for the NFL without ever coaching a game for the team and since then multiple former players have fired back at him over the way their contracts have been handled or how their releases were discussed with the media.

Issues in Edmonton worsened when the Elks suffered the league’s first COVID outbreak in August, causing the postponement of their game in Toronto. In total, a league-leading 17 Elks players have entered COVID protocol this season. It’s been reported that Sunderland has not been vaccinated and received a medical exemption after consultation with several doctors.

From Moddejonge’s piece, headlined “Until proven otherwise, the Edmonton Elks are who we thought they were“:

If it weren’t for the Edmonton Elks sitting alone in last place in the Canadian Football League standings, they’d have no identity at all.

…In a game where the only question was whether they gave up or failed to even show up, Edmonton needed to feast off the bottom-feeding Redblacks in order to bounce back from a previous loss to the first-place Winnipeg Blue Bombers they will now face in back-to-back weeks. Instead, they fell 34-24 in the nation’s capital in a completely uninspired performance.

To be fair, uninspired is putting it kindly. Rookie head coach Jaime Elizondo described it like this: “Embarrassed.”

And there’s plenty more out there. From Sun columnist Terry Jones after last week’s loss:

Jaime Elizondo has got to be gonzo Alonzo.

…Elks general manager Brock Sunderland, after that exhibition with 10 days before the Elks play the next one is going to have to give serious consideration to firing his head coach at midseason, something no football general manager ever wants to do.

…Not showing up to play games has been a trademark of this team this season.

For the second week in a row Edmonton was down 14-0 early. And you’d be hard pressed to find an example of somebody being as out-coached as Elizondo was by Ottawa’s Paul LaPolice in that game.

…As was the case when they met the Redblacks to open the season in Edmonton, the Elks travelled to play a game in Ottawa Tuesday night that they couldn’t possibly, conceivably, imaginably manage to lose.

Whether blame for the Elks’ season to date lies more with Sunderland, Elizondo, or particular players can be debated. It’s also possible for the Elks to make the case that they’ve had some bad luck, including an injury to starting quarterback Trevor Harris that’s led to them using rookie quarterback Taylor Cornelius; using a rookie QB in the CFL rarely goes well (but it’s notable that they just lost to an Ottawa team using an even less experienced rookie, Caleb Evans). And Sunderland made some of that case in comments to Jones on why he isn’t firing Elizondo at this point. But that piece is notable for how upset Sunderland is with his own team’s play, and how understanding he is of fan anger and frustration:

“The way I look at it is Jaime is not 2-5, the entire organization is 2-5. We’re all in this situation together, collectively.”

…”I think Jaime is working his tail off trying to get wins as much as anybody else in the organization.”

“None of us are happy being 2-5. That was not a fun plane ride home from Ottawa after the game. The flight back from B.C. and the bus ride back from Calgary [after the team’s only wins this year] were certainly more enjoyable.”

So, what does the general manager tell the fans?

“That as frustrated as they are with us, multiply it by about a billion and that’s where we are.”

“We get that they’re as frustrated as they definitely deserve to be. All I can tell them is that we’re working to do everything we can to turn this around and win games every week.”

It seems Sunderland and the Elks’ organization aren’t as understanding when that frustration and criticism comes from a team radio analyst, though. And sure, there’s a case that it’s probably not ideal for a team analyst to specifically single out the general manager for blame in these kinds of terms. But there’s also a case that teams should be open to criticism when warranted from even their official radio broadcasts, and that firing a radio analyst for criticisms similar to those coming from independent media members is a bad look, one suggesting that the team’s taking action against the critics it can control. And firing a radio analyst seems unlikely to turn the Elks’ season around.

[3 Down Nation, The Rod Pedersen Show]