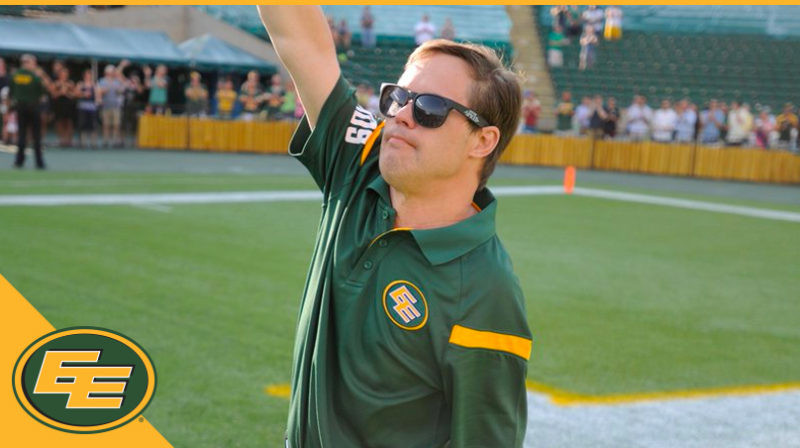 The early criticism the Canadian Football League’s Edmonton Elks took Wednesday was over the firing of game-day radio host Eddie Steele (a former player for the Elks and other CFL teams) for his criticisms of Elks’ GM Brock Sunderland. That was significant enough, and seemed like the team (currently 2-5) couldn’t take criticism from those associated with them. But a report from long-time Edmonton media figure Robin Brownlee (he currently works for Oilers Nation, but he’s spent decades in Edmonton print and radio) is potentially much more devastating for Sunderland if it’s true. And it’s notable that while the team statement in response throws out a lot of things on what they did do, it does not specifically deny Brownlee’s main report. Here’s that report:

What's the culture of an organization that fires a loyal employee like Dwayne Mandrusiak @DRockEsks after 49 years and bans Joey Moss from the dressing room because it's been decided he's become a distraction? These decisions were made by Brock Sunderland. Let's talk about that. https://t.co/tYJ7eJ2s3j

Oh, it's true. Multiple sources. Joe Moss, part of the EE staff for years, was banned from the dressing room and it was Brock Sunderland who made the call. https://t.co/qQ67i2NLCQ

The Mandrusiak decision alone is bad enough, and it took a ton of criticism last fall (in the middle of a non-CFL season due to the COVID-19 pandemic, no less) when it happened. But it’s the alleged Moss decision that’s particularly significant here, as it had not previously been reported that Moss had been banned from the team locker room, and that Sunderland was involved. For those unfamiliar, Moss, born with Down’s syndrome, was a famed locker room attendant for the Elks (then named the Edmonton Eskimos) and the NHL’s Edmonton Oilers for decades, and his passing at 57 last October sparked incredible tributes across Canada and beyond.

Joey Moss was arguably more popular in Edmonton than any football GM past or present. So a decision to remove him from the locker room seems like a hell of a move, especially for someone like Sunderland, an American who never even played in the CFL. (He played college football for the Montana Grizzlies.) Sunderland’s resume includes scouting roles with the Montreal Alouettes from 2004-07, scouting for the New York Jets from 2007-12, an assistant general manager role with the Ottawa Redblacks from 2013-16, and the GM role with Edmonton from 2017 on; that’s all fine, but it’s notable that his career record in Edmonton is just 31-31 at this point, with two playoff appearances across three seasons (potentially across four if they miss the postseason again this year) and no Grey Cup appearances.

Sunderland is not an Edmonton legend or a CFL legend, and it’s quite possible he may never be at this rate. So it’s quite something that he reportedly made this move against someone much more significant for many players and fans in Edmonton. And it’s notable that the statement the team put out in response talks a lot about how they supported Moss and his family in various ways, but it includes absolutely no refutation of Brownlee’s report on the locker room; it talks around it without denying it. Here’s that statement in full:

Please see the following statement from Joey Moss’ nephew Adam Walker, regarding the conclusion of Joey’s time with the Edmonton Elks Football Club.

“The Edmonton Elks always included Joey within the organization until the day he was no longer able to work. The Elks continue to support Joey and his legacy. The 50/50 in 2020 raised nearly half a million dollars for the Joey Moss Memorial Fund. This will be an annual event. The Elks have also hired two individuals from the Winnifred Steward Employment Program. They have been an outstanding organization and have always treated Joey with the highest respect.”

Further to the family’s statement above, the Elks categorically deny that any member of the club’s management requested that Joey no longer be part of the organization.

The Green and Gold cherished Joey’s presence around the team, and respect the important role he played with the organization for decades.

That is quite the statement, as it’s worded in just such a way that it “categorically denies” something that was not reported and does not deny what was actually reported. Brownlee did not report that anyone, Sunderland or otherwise, “requested that Joey no longer be part of the organization.” He reported that Moss was banned from the locker room at Sunderland’s instigation. It’s very possible to ban someone from a locker room without removing them from the organization, and in this particular case, that’s possibly even worse than many other “reassignments” to non-roles, as so much of what Moss was known for was helping out in the locker room with the Elks and Oilers. Taking that role away from him seems like quite the blow, especially if there wasn’t a good reason beyond Sunderland viewing him as a “distraction.” Brownlee’s report also was seconded by former TSN 1260 co-host Allison Currie:

Currie also noted how the Elks’ statement did not address the reporting:

“Elks categorically deny that any member of the club’s management requested that Joey no longer be part of the organization.”

That wasn’t the claim. This talks around it. https://t.co/4ztmDWsRi7

(Spoiler alert: he had not been honest)

If the Elks are going to deny Brownlee’s actual report that Sunderland banned Moss from the locker room, they should do that. They have not done that so far. And that adds to what’s been an amazingly terrible day of press for them. And it’s saying a lot about how badly this day has been handled that they’re getting more negative attention for a firing of a liked radio analyst and a reported past locker room ban of a legend than they are for their 2-5 shambles to date. Being bad on the field is one thing, but being inept off the field makes it worse, and that’s certainly how they look right now.