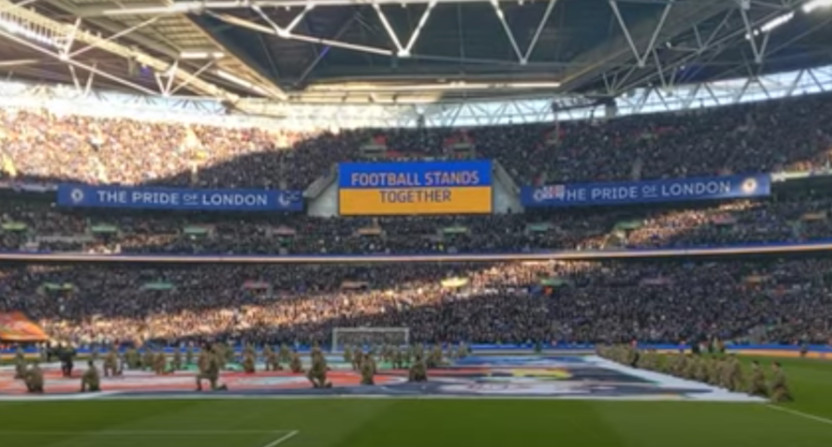 Many sports leagues and governing bodies have weighed in on Russia’s invasion of Ukraine, from canceling events and broadcasting deals with Russia to banning Russian teams from competitions to putting out statements and planning demonstrations of support for Ukraine. (One at last week’s Carabao Cup final between Liverpool and Chelsea is pictured at top.) And the Premier League’s planned demonstrations this weekend will now see those matches prohibited from airing in China. Here’s more on that from Dan Roan at the BBC:

Chinese rights holders have told the Premier League they will not broadcast English top-flight matches this weekend because of the league’s planned shows of support for Ukraine, the BBC has learnt.

China is a close political ally of Russia, which has invaded Ukraine.

The Premier League has said it “wholeheartedly rejects Russia’s actions” and is set to show solidarity with Ukraine.

“We call for peace and our thoughts are with all those who have been impacted,” it added, when announcing its plans earlier this week.

That will include captains wearing special armbands in Ukrainian colours, while stadium screens will display ‘Football Stands Together’ in front of the country’s blue and yellow flag.

As Roan notes, this isn’t the first time Chinese authorities have refused to air particular Premier League matches. Chinese state broadcaster CCTV and streaming broadcaster PPTV both refused to air a 2019 Arsenal-Manchester City match following Arsenal player Mesut Özil’s statement of support for Muslims in China, which came in the wake of leaked documents describing China’s forced internment of one million Uyghur Muslim citizens in the Xinjiang province. CCTV continued to not show Arsenal matches for a while after that, and while PPTV did, the commentators refused to mention Özil’s name during one broadcast. The Chinese release of Konami’s eFootball Pro Evolution Soccer 2020 also removed Özil from the game (an interesting predecessor to EA’s FIFA 22 and NHL 22 removing Russian teams this week).

And, in other sports, CCTV pulled NBA games for a year following the controversy around Daryl Morey’s 2019 tweet in support of protesters in Hong Kong. They also stopped broadcasting Boston Celtics games last fall after Enes Kanter (now Enes Kanter Freedom) advocated for Tibetan independence. So this move against the Premier League is not unprecedented.

But this is interesting considering that most previous Chinese censorship cases have been about players, executives, or leagues commenting on China, not about events in Europe where China is not directly involved. In fact, China didn’t even vote against the UN resolution to condemn Russia’s invasion. They, along with 33 other countries, abstained; only Russia and four other countries voted against the resolution.

Yes, China has close links to Russia, and an intelligence report discussed this week suggested that Chinese officials asked Russia to postpone the Ukraine invasion until the conclusion of the Beijing Olympics. So this is something they have weighed in on on some levels.  But it’s still not a conflict directly involving them. And that makes it notable to see Chinese state TV invoking censorship against the Premier League over expressions of support for Ukraine against Russia, and brings up questions of if they’ll do the same around the many other leagues (including MLS) that have expressed or will express support for Ukraine.