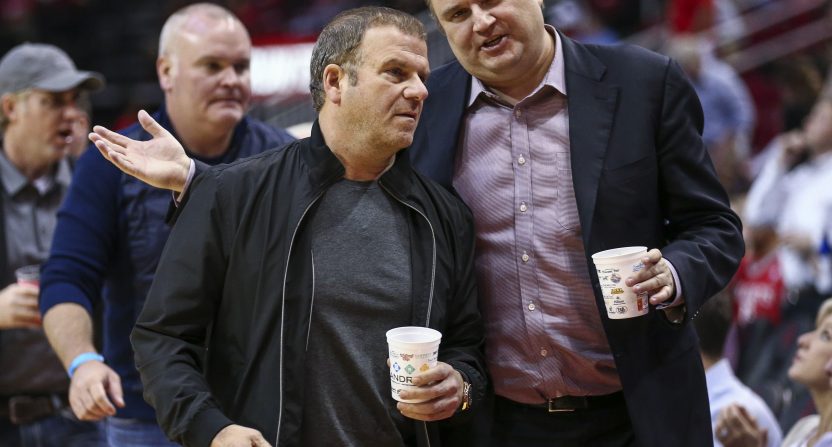 Friday’s tweet from Houston Rockets’ general manager Daryl Morey (seen at right above with Rockets’ owner Tilman Fertitta) expressing support for the Hong Kong protests resulted in a rocky past four days between China and the NBA, and that’s now escalated to China stopping broadcasts of all NBA preseason games, not just Rockets’ games. The NBA has extensive business relationships with China, as do the Rockets in particular, and Morey’s tweet has started to affect some of those. Among other things, NBA games are broadcast on China’s state television station, CCTV. That is, they were.

On Tuesday, CCTV and Tencent announced that they would stop airing and streaming NBA preseason games in China after this. In response, NBA commissioner Adam Silver tried to go the neutral route by acknowledging that “people around the world…will have different viewpoints over different issues,” but said he isn’t going to put the NBA “in a position of regulating what players, employees and team owners say or will not say.”

Silver and the NBA has usually been proactive on social and political issues like racism, gun control, and Enes Kanter’s comments against Turkey president Recep Tayyip Erdogan. The NBA was especially strong against Turkey after they tried to find ways to eliminate Kanter from their local social media and TV broadcasts. The NBA fired a vendor who ran the league’s official Twitter page after they omitted Kanter’s name in a tweet. But in last year’s playoffs, Turkey’s NBA rights holder wouldn’t broadcast the Western Conference Finals because Kanter’s Portland Trail Blazers were playing.

At the end of the day, China has way more people, money, and resources than Turkey, and also has much closer ties to the NBA. It’s much easier to look strong against Turkey than against China, given the kind of business relationship they have. This is why Disney-owned ESPN hasn’t really discussed the situation, other than Stephen A. Smith giving Morey a very elongated “stick to sports” lecture. This is why Blizzard, a video game company that supports esports competitions, suspended a Hong Kong player for a year and took his prize money over a statement of support for the protests on a stream. (Blizzard also fired the streamers involved, even though they made it clear they weren’t associated with that statement.)

If a corporation feels they need the Chinese market, people in those corporations shut up pretty quickly about what China does. Disney, and by extension ESPN, isn’t going to say anything to jeopardize their relationship with China when their Star Wars and Marvel films can make a whole lot of money in China alone. (Avengers: Endgame made an estimated $629 million there, while Spider-Man: Far From Home made $203 million there.)

The NBA is no different. China is a major market for their international efforts, and and they don’t want to do anything to tick China off, because that directly hurts their bottom line. However, they’re in a difficult spot because of their previous support for players, coaches and executives making social and political comments, and that leads to Silver’s comments that the league’s not going to regulate the speech of those involved with it.

Those comments may not be enough for anyone, though; Silver and the NBA have taken criticism from American politicians (and from many fans) for not supporting Morey more, creating the impression that Silver’s willing to risk his perception as a commissioner to help keep up the NBA’s relationship with China, but even his muted comments aren’t keeping China happy. There are complaints on that side that Silver should be doing more to regulate NBA players and executives’ speech, and as Rachel Nichols noted on ESPN, Silver’s even facing criticism from former Rockets’ star Yao Ming (now the head of the Chinese Basketball Association). We’ll see where this goes from here.