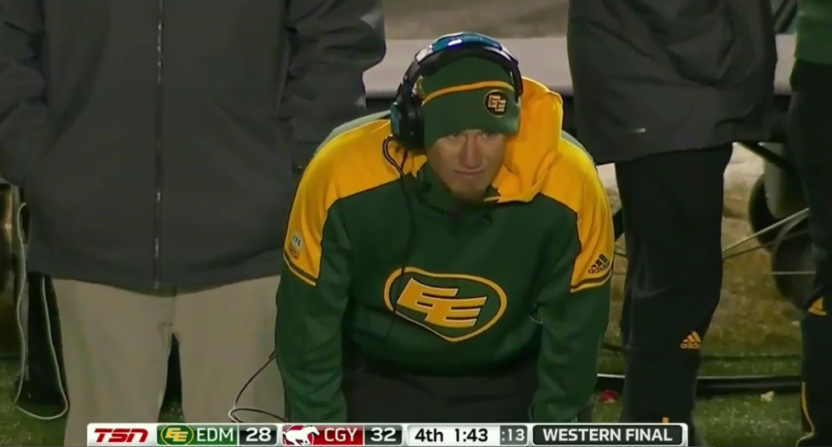 It’s been quite the weekend for curious late-game clock management moves, with Utah coach Kyle Whittingham’s late timeout setting up Washington’s win in NCAA action Saturday and Edmonton Eskimos’ coach Jason Maas perhaps topping that in the CFL’s West Division final Sunday evening. Following a weird finish to the East Division final between Saskatchewan and Toronto, the Eskimos and Calgary Stampeders managed to find a way to one-up that thanks to a bizarre coaching decision, one that the TSN broadcast took thoroughly to task in some of the harshest on-air criticism of a coaching move you’ll ever hear.

The teams went back and forth for most of Sunday’s game, with Edmonton leading 14-0 after the first quarter but Calgary storming back for a 22-15 lead by the half and a 31-18 lead after three quarters. The Eskimos had a chance to equalize late, though, trailing 32-25 but converting a third-and-10 situation near midfield and getting to third-and-four at the Stampeders’ 13 with 1:56 left. And then, Maas made the most controversial call of the CFL season, sending out Sean Whyte to kick a field goal instead of trying for the tying touchdown, and was promptly roasted by TSN’s announcers and analysts in a way that it’s quite rare to see.

TSN commentators Chris Cuthbert and Glen Suitor immediately started wondering what Maas was doing. Suitor first pondered if Edmonton might go for two and the win if they scored a touchdown, as their long-snapper had previously been hurt and they were kicking into the wind, making even an extra point not a sure thing. Cuthbert then noted that the Eskimos were pulling their offense off the field to kick a field goal, and Suitor wondered what they were up to:

Cuthbert and Suitor then talked about this further, wondering if the plan was to try an onside kick:

Edmonton didn’t do that, instead kicking deep. Suitor said he thought Maas’ strategy changed in the middle of the drive, as they could have punted on the third-and-10 if the goal was to get a stop and get the ball back:

Edmonton did not get that stop on the Stampeders’ first series, and the commentators kept discussing this, with Suitor wondering if Maas forgot about the punt rouge that put Calgary up by seven.

Suitor later said “It doesn’t make any sense” as the Stampeders punted with 22 seconds left. To add insult to injury, Eskimos’ returner Jamill Smith fumbled and Calgary recovered, sealing their berth in next week’s Grey Cup.

After the game, TSN analysts Matt Dunigan and Milt Stegall joined in on the roast of Maas, with Dunigan saying “It doesn’t make any sense to me. …It’s mind-boggling.”

Stegall then said “I just don’t understand what he was thinking. …That was definitely the wrong decision.” Fellow TSN analyst Jock Climie then said “It happens that coaches just have a brain-freeze in those types of situations. It’s not an excuse. And Jason Maas will probably think about that for the rest of his life.”

That’s some of the most thorough and prolonged on-broadcast criticism we’ve ever seen (and we didn’t even include all of it here), but it’s hard to say it wasn’t deserved. CFL fans everywhere were wondering what Maas was doing, and the broadcast did a good job of trying to present different scenarios of what he could be thinking, as it certainly wasn’t clear from the outside. It was a highly unusual situation from both a broadcasting and on-field side, but it’s tough to find fault with how the broadcasters handled it. It’s very easy to find fault with how Maas handled it, and that move may be why his team won’t be in this year’s Grey Cup; instead, that will be Calgary against East champion Toronto, in a rematch of the 2012 title game. As for Maas, here’s how he defended it to Edmonton radio broadcaster CHED afterwards:

Maas interview on CHED…”We would have kicked the extra point or go for two to put ourselves ahead. I felt like if we got the field goal, we would have enough time based on if our defense got the stop….We’d have over a minute to play with, with good field position.”

Here’s another explanatory quote from Maas:

That doesn’t seem to make much sense, as they’d still need a touchdown, and would be in worse field position than they were from the 13. But at least it’s some form of explanation. Curiously enough, Maas is the coach who infamously raged against being miked-up last year. We wouldn’t see mikes on coaches in a playoff game anyway, but it would have been interesting in this case to hear what he was actually thinking in real time, rather than after the fact. But without that, the broadcasters did a nice job of trying to understand this bizarre decision. And hey, at least it worked out for some people: the field goal meant Edmonton covered the 5-to-5.5 point spread. It sure didn’t work out for Maas’ team, though, and the analysts were right to wonder what he was thinking.