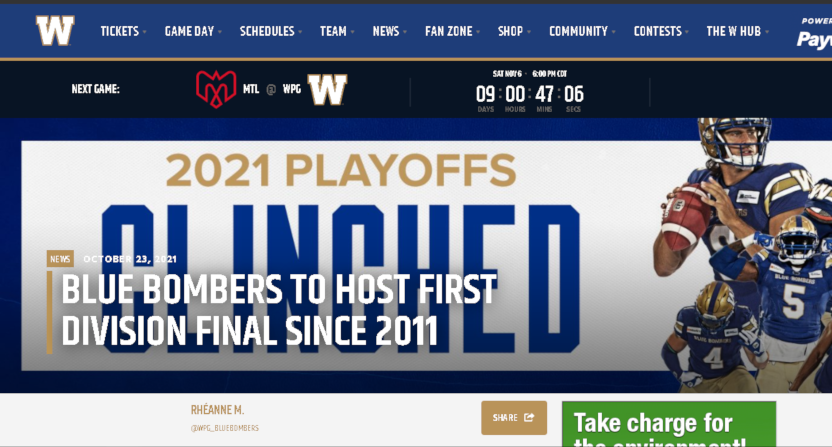 There’s always a lot of discussion about when sports events start, and there are a lot of competing factors to balance there. At any sport event of sufficient size, you’re balancing A. what’s best for TV, B. what works for fans in the stands, C. the impacts from and on potentially competing events, and possibly more. Given the importance of TV revenue and national (rather than local) audiences in most sports, A. usually is the priority, but that leads to complaints from those who want more focus on B. and C. (see Saturday noon ET kickoffs and midweek games for fan and school complaints, Friday night games for complaints from both fans and the high school football world, and more).

The Canadian Football League has shown some interesting past flexibility with more focus on B. and C., though. That includes moving a 2019 regular-season kickoff time to avoid conflict with an Arkells show, and much more; they’ve quite often shifted timing based on local teams’ requests.  And the CFL’s latest move, an announcement of a time shift for the East and West Finals on December 5, has the potential to be good for all of A., B., and C. Here’s more from their release:

The CFL’s Eastern Final and Western Final games on Dec. 5, 2021, will each begin 30 minutes earlier than originally scheduled.

The Eastern Final will now kick off at 12:30 p.m. ET. The location of the game has yet to be decided.

The Western Final, to be hosted by the Winnipeg Blue Bombers at IG Field, will now kick off at 4 p.m. ET/3 p.m. CT. Tickets for the Western Final are on sale now.

The changes have been coordinated with the CFL’s national broadcast partners at Bell Media, TSN and RDS.

Why does that half hour matter? Well, in particular, a 4:30 p.m. ET/3:30 p.m. CT kickoff for the West Final (which the 10-1 Blue Bombers clinched a bye to and a hosting of this past week) as normal would have meant the CFL game (which usually takes around three hours) was fully running into the NHL’s Winnipeg Jets’ home game against the Toronto Maple Leafs, set for 7 p.m. CT. And that’s a big deal for everyone from the A., B., and C. categories. For TV, that Jets-Leafs game is scheduled to be carried on TSN3 and TSN4 (the regional feeds for both Winnipeg and Ontario), and a long-running West Final would have either led to a number of fans missing the CFL ending or missing the start of that hockey game (which is bad both for them and for TSN).

For local fans, there’s now at least a possibility of attending both games (that’s not going to be cheap, and anyone doing so will likely miss the end of the football game and/or the start of the hockey game while in transit, but it’s a possibility), and a more-likely possibility of watching one on TV and going to the other one. And from a competition perspective, the two largest Winnipeg professional sports franchises now aren’t going head-to-head on TV, and the Jets and Leafs are now no longer overlapping with the CFL playoffs. So that’s an edge both for fans and for TSN.

Of course, this logic shouldn’t be overextended. The value of making a move like this to consider another event depends heavily on how much of your audience (either in-stadium or on TV) has crossover with that second event. And that crossover seems likely to be higher between the CFL and the Jets (and Leafs) than it does in many other circumstances. (And many other scheduling circumstances are about maximizing national TV and unconcerned with the effects on in-stadium fans or other events.) And while any shift is no doubt inconvenient for some people, this particular one seems useful for all the A., B., and C. groups mentioned above, so there’s really not a lot to argue against it (other than the earlier Eastern Final as a result, but even that seems not too bad, and it lets the CFL’s playoff games start half an hour before the NFL games that Sunday).

The CFL’s 1 p.m. and 4:30 p.m. divisional final times (which have usually been the  slots for these games) have normally been fine. So it of course made sense that the league announced that as the plan at the start of this year. But with Winnipeg locked in as the host of the West Final, and with the Jets and Leafs scheduled to play that night, it made a lot of sense to make this change. And the league deserves some credit for that scheduling flexibility; some people no doubt would preferred to keep that schedule fixed regardless of the NHL, but this particular move seems like it’s going to work out well for all parties. Flexibility can be a good thing, and it looks to be one in this case.