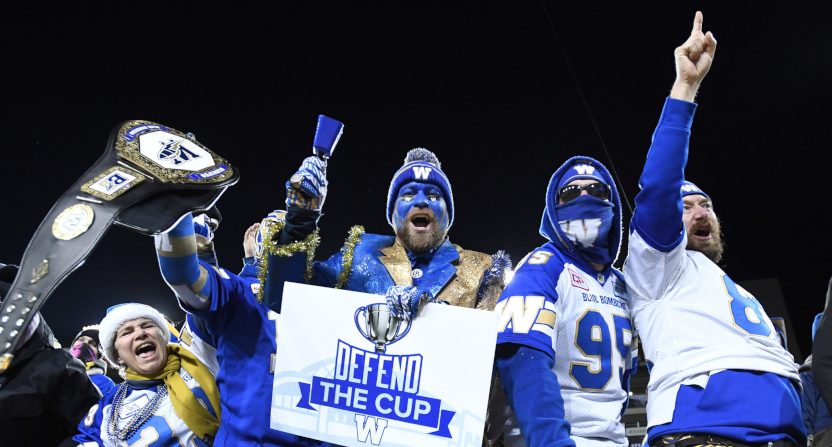 While the Canadian Football League is returning to its usual 18-game regular season schedule for 2022 (rather than 2021’s abbreviated 14-game version that started and ended later), it’s going to be quite a different CFL schedule than what we’ve seen in normal years. In particular, the league is further emphasizing divisional play; while cross-division teams will still play each other at least once, the Grey Cup champion Winnipeg Blue Bombers will be the only team to travel to every other city. In a nine-team league, that means a lot of the same opponents will be coming to town regularly. Here’s the CFL’s rationale from their release:

Every game in the final two weeks of the season will feature heated divisional contests as teams jockey for positioning ahead of the 2022 Grey Cup playoffs. Throughout the season, there will be an increased emphasis on playing divisional opponents to reduce the burden of travel and to add urgency to key matchups. The defending champions will be the only team to travel to every CFL market as they chase a third consecutive title.

There is some merit to this idea. Focusing on divisional matchups late in particular makes a lot of sense, as that could make a fair difference in the playoff races. That also means that teams won’t have as long of travel in the last few weeks of the season, so they’ll possibly be fresher for the playoffs.

Granted, “divisional” doesn’t mean less travel in every instance. For Winnipeg, for example, divisional opponent B.C. (which plays in Vancouver) is 1,560 miles away by air, while cross-divisional opponents Hamilton and Toronto are 937 and 941 miles away). And in the West, this will be some shorter flights, but everything other than Edmonton to Calgary is still usually a flight.  But this will be particularly lower travel for the East Division of Hamilton, Toronto, Montreal and Ottawa, as it’s possible to travel by bus or train between those cities instead of by air (and CFL teams often opt for those options). So there is at least some point to the travel argument, and that comes with a couple of potential advantages; it may keep players more rested, and it may have some cost savings (especially in the East).

However, it should be noted that the CFL didn’t have a balanced schedule before this; there were already more divisional matchups than not. This is dialing it up further. And it’s doing so in a way that has some obvious potential downsides. For one thing, the decision to have all non-Winnipeg teams not go to every opposing city is rough for fans of those teams that live in those cities (and there are significant numbers of those in many cases). And that has potential impacts for the home teams, too; that means they can’t sell tickets to those fans, and it also may mean their home fans (and season ticket holders in particular) get bored of seeing the same few teams and players all the time. There’s maybe a chance of getting more travelling visiting fans for closer divisional matchups, but the incentive to travel’s reduced when these teams play each other all the time.

This could also have an impact on the television side. Some of the CFL games that pop more than usual in the ratings are the specific historical rivalry games, such as the Labour Day Classics and the week-later rematches, and fortunately, those will be there again this year. But there’s at least a chance  the Battle of Alberta (Calgary at Edmonton the week after Labour Day) doesn’t feel quite as special when those teams are meeting four times a season rather than three. And that may lead to not just lower attendance, but also lower ratings; if viewers get bored seeing the same teams playing each other more often, maybe they’ll tune out of those games faster, or won’t tune in at all.

At this point, the impacts are obviously more theoretical than proven. Maybe more divisional matchups will be embraced, and maybe the downsides (fans not seeing particular teams they’re interested in visit each year) won’t wind up all that big. And there definitely will be some advantages for players and teams from more short travel trips. But there are at least some reasons for concern here. The CFL’s already a small league, with only nine teams; reducing the variety of opponents fans see at home each year would seem to come with some drawbacks.