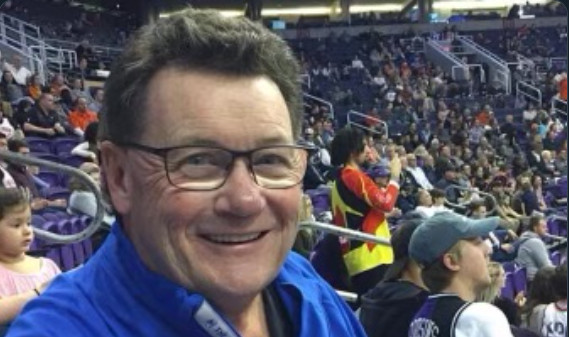 Two weeks back, we wrote about the challenges famed Canadian sportscaster Warren “Woodsy” Woods was facing in an attempt to recover from a battle with COVID-19. On Wednesday, Rob Vanstone of The Regina Leader-Post reported that Woods passed away at 66:

Warren Woods was a great friend to all — including people he never met.

Woodsy, who died Wednesday afternoon at age 66 from complications after contracting COVID-19 in late November, spent half his life working in the Regina media, endearing himself to listeners and viewers with his folksy manner.

He was the same in person as he was on the air. Few people in the broadcasting business are skilled or genuine enough to pull that off, but he related to people effortlessly and naturally.

After beginning his sportscasting career at CSKO Radio in his hometown of Sudbury, ON, where he worked for five years, Woods then moved to television in Timmons, ON (for five years) and Thunder Bay (for six). In 1987, he headed west to Regina, Saskatchewan, and was an initial anchor on STV (now Global Regina) when it launched. He spent 30-plus years on the Regina media scene with STV, Global and then CJME Radio, and was a hugely-prominent figure in coverage of many sports, from high school and amateur contests to the CFL’s Saskatchewan Roughriders, the CJFL’s Regina Rams, the WHL’s Regina Pats, and the local curling scene (he was inducted into the CurlSask Hall of Fame in 2014). And he was incredibly beloved by many, as the tributes following his passing (including one from Saskatchewan premier Scott Moe) illustrate:

I am saddened to hear of the passing of one of Saskatchewan’s most popular sports broadcasters, Warren Woods. Saskatchewan lost a great friend today. For this night and only for Woodsy… Go Leafs. pic.twitter.com/6ayxn3TAOV

“Uncle Woodsy” holding an egg nog after carving (badly!) the turkey for my family’s holiday supper. The friendliest #WiseGuy who was always ready for a camera, a gimme or a laugh. Gonna miss you, Warren Woods. pic.twitter.com/gtRyZprBXq

Gutted by the passing of Warren Woods. He truly had no enemies. Thanks for the memories Woodsy and for just being a really good guy. https://t.co/8ugiRR1wIe

Warren Woods was one of the most down to earth, easy going guys I’ve had the pleasure of knowing and working with. The whistle in his laugh when he really got going was truly infectious. A fixture in our community gone too soon. Rest In Peace, Woodsy. pic.twitter.com/yXhesfxDrG

The Saskatchewan curling community is deeply saddened to hear the passing of Warren Woods.

Curling fans throughout Saskatchewan know Warren Woods as the voice of Curling, broadcasting curling on Global Television for 20 years.

It's been an absolute pleasure to know Warren Woods for the last 8+ years. We had a lot of fun together on the CJME Morning Show and on The Green Zone and I can not say enough good things about you, Woodsy. I'll miss you more than you know, buddy. Thanks for all the laughs pic.twitter.com/f7ted5T4w5

Devastating news out of Saskatchewan.

A family statement says his children, Nicole and Chris, were by his side. My sincere condolences to the Woods family.

Warren Woods and I are two Sudbury guys who landed in Regina and became good friends. Warren described living in Sudbury: “We don’t pick our potatoes, we blast them out.”So many laughs and memories over the years. I’ll miss you Woodsy and rest in peace good buddy. F*** COVID.

Sympathies to the friends, family, fans and the countless people touched by Warren Woods, who was larger then life and then robbed of his Own by COVID-19. If you've ever spent time in the 306, and were a sports fan in Saskatchewan, Warren was a fixture — https://t.co/pCWhOq4L8T

RIP Woodsy. You couldn’t find a better guy. Thoughts and prayers with his family.

One of kind for sure and he will be missed! So sad to hear of the passing of my former work colleague and friend @GlobalRegina, Warren Woods. Friend, colleague, community builder. pic.twitter.com/qtmQlbtgug

Warren Woods was the first person to text me when Rawlco fired me to make sure I knew that I would end up back on my feet.

Too many game days, beers together, lost wages at the casino and weeks in the small Green Zone office arguing of anyone “gave a shit” about basketball.

Woodsy blew my mind as a sports crazed teenager in the early 90s.

Loved his folksy charm, & I mean that in the best way possible. Huge fan.

Everytime at radio station the last few years, he wanted to chat & ask how we were doing. It meant a lot to me.

Rest easy Woodsy. You will be missed by many. Prayers for his family https://t.co/gWtmEYmCd8

RIP Warren Woods. Always a pleasure to work with and did it with a smile.

The Covid-related death of a well-known and beloved sportscaster in Sask. is stunning and sad for this province. If you grew up here, you grew up with Warren Woods. Tributes, such as this..have begun to pour in https://t.co/MlE9xihhmY https://t.co/F2eZHDElVY

For all of us involved with the RAMS, from the late 80s on, the STV group led by Warren Woods and Ron Rimmer were a staple at the clubhouse. Woodsy was one of us. Rams Alumni and Friends send our condolences to the Woods family at this time.

Woodsy loved you all! He loved the people he covered, the fans he met, the strangers that would say I watched you on sports line! He loved life. He loved his friends. He loved his kids and grandkids. And we all loved him right back. I’ll miss that laugh so damn much. #RIPWoodsy pic.twitter.com/U7fWNt5Dnn

From Warren Woods family via the Regina Pats.

I only knew Warren a little bit. But I’m heartbroken pic.twitter.com/EYhNFB0M2k

Woodsy left an incredible impact on the Canadian media scene over his decades of work in Ontario and Saskatchewan. Our thoughts go out to his friends and family.