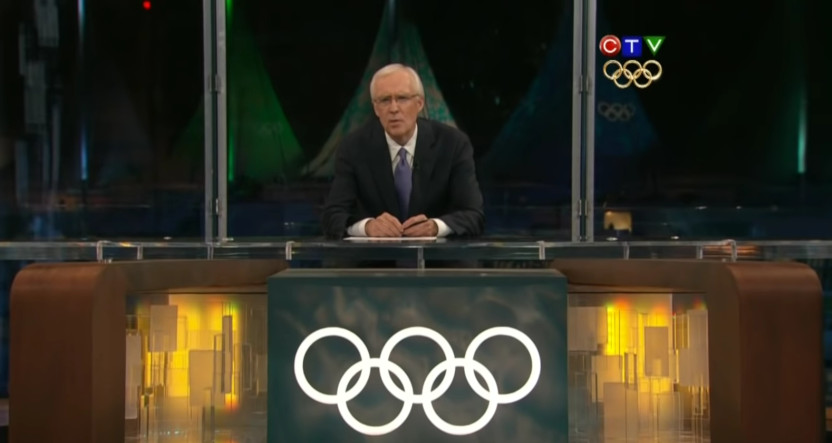 One of Canada’s most recognizable sports broadcasters is calling it a career. Brian Williams (no, not the American one) is hanging up his microphone after 50 years as a professional broadcaster, including radio work with Toronto stations CFRB and CHUM, a 1974-2006 stint with CBC and a 2006-present stint with CTV and TSN. He was named to the Order of Canada in 2011 for both his broadcasting and his extensive charity and community work.

TSN plans to salute Williams (seen above on CTV’s coverage of the 2010 Winter Olympics) on their pre-game coverage ahead of the 108th Grey Cup on Dec. 12, which makes sense considering his long involvement with the CFL. He was inducted into the Canadian Football Hall of Fame Football Reporters Wing in 2010, selected by the Football Reporters of Canada, and he was presented with the league’s Commissioner’s Award ahead of the 100th Grey Cup in 2012. Here, via CFL author Paul Woods, is a lovely montage of some of Williams’ many interviews with CFL commissioners over the years:

Here’s more on Williams from a TSN release:

“As I look back on my career, what’s most meaningful is that I have had the privilege of working with so many wonderful and talented people on both radio and television,” said Williams. “Over the course of the last 50 years, I’ve been fortunate to cover so many great athletes and amazing events, both at home and abroad. I’d like to express my sincere thanks to all.”

“Growing up, I always knew I was watching a major Canadian sports moment when I saw Brian Williams covering it on CBC. Having Brian bring his stature and gravitas to TSN was a game-changer for our network,” said Stewart Johnston, Senior VP, Sales and Sports, Bell Media. “Brian is a true legend who has brought extraordinary knowledge, warmth, and humour to TSN broadcasts. A remarkable storyteller with a generous spirit, Brian has dedicated so much of his time to causes close to his heart. We miss him on-air and around the office, but are grateful for all the incredible years he has spent with TSN. We wish him all the best as he begins his retirement.”

Williams started his sportscasting career while at Aquinas College in Grand Rapids, Michigan in 1967, calling Tommies basketball games, then returned to Canada, working for CFRB and CHUM and then joining the CBC in 1974. At CBC, he called play-by-play for Toronto Blue Jays games, served as a studio host for the CFL, Formula 1, and horse racing, covered the 2002 FIFA World Cup, and was the primary studio host for 11 Olympics there. He also hosted Olympic coverage for CTV and TSN, particularly in 2010 and 2012, and contributed to other Olympic broadcasts, other CFL broadcasts, and more there. Here’s how Williams closed out the 2010 Olympics in Vancouver (a still from this is the photo at top):

Those 2010 Games were also notable for a “Battle of the Brians” that didn’t have anything to do with figure skating. NBC sent American Brian Williams to those Olympics as well, and the two Brian Williamses combined on a segment:

We wish all the best to Williams in his retirement.