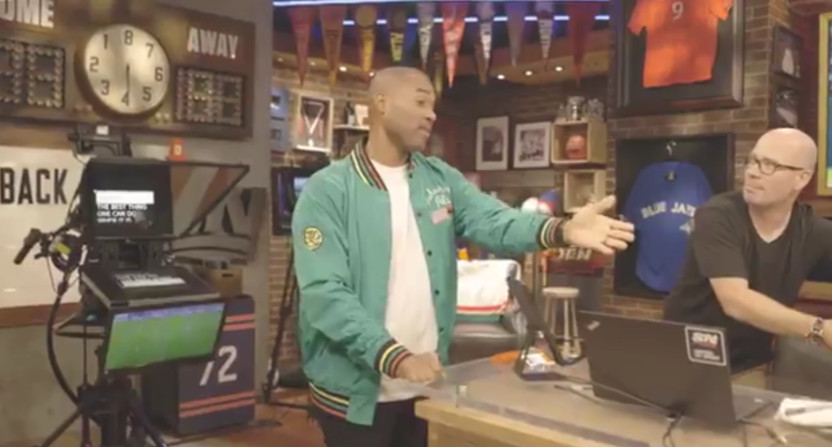 Cabral “Cabbie” Richards is heading back to Canada. Richards (seen at left above) has spent much of the last two decades in the Canadian media scene, starting with The Score (2001-2002), then Sportsnet (2002-05), then The Score again (2005-2010) and TSN (2011-19), but he went to the U.S. in 2019 to join Bleacher Report’s betting coverage. He’s done a lot of different gambling-focused shows for B/R and Turner Sports more broadly, including work on the TNT Bets alternate feed of NBA games, and it looks like he’ll keep that betting focus at Sportsnet. Here’s what he posted to Twitter about this move:

I'm betting on @sportsnet. Back in Canada. Feels amazing to be home. Hyped to build a new squad bringing betting to Canada ? SALUTE to @tim_micallef my day one. pic.twitter.com/IDYvi6GNck

Here’s more from a release from Rogers (Sportsnet’s parent company), which has Richards listed as “executive producer of sports betting content”:

“There are few media personalities anywhere who have achieved instant first-name recognition and who resonate strongly with a diverse set of audiences. Cabbie’s style, enthusiasm, and originality are unrivaled, and his addition to Sportsnet is another exciting step in our expansion into sports betting and continued content innovation,” said Andrew Sutherland, VP of Original Content at Sportsnet.

…“Having an opportunity to come home and help build the betting portfolio, social experiences, and ride the highs and lows of wagering with Sportsnet has me hyped like hitting a 15 leg parlay!” said Cabbie. “Working with Bleacher Report Betting in Las Vegas was an invaluable experience, one that I will cherish. But now I’m excited to return to Sportsnet and reunite with my good friends Tim Micallef, Donnovan Bennett, and a whole host of other really smart people who have us in a great position to put Sportsnet on the board in this space. I can’t wait to start engaging with the betting community, which has been thriving under wraps in Canada for decades. Let’s get it!”

Richards has long been an unconventional media personality, and that’s particularly shown up in his athlete interviews, which have often seen athletes being more open as a result than they’ve been in many more-conventional media sessions. Here’s part of what he told Courtney Shea of The Globe and Mail about his interviewing approach back in 2015; the whole piece is worth a read for a look at who he is and what he’s trying to bring to the media world.

I went to Ryerson for radio and TV and then my first internship was at a sports station. I was doing the usual stuff – gathering data and stats. Then I pitched this idea of being a man on the street. That was based on my big, silly personality. I’ve always been that guy in the group of friends, the one idiot who will go and lick the frozen pole. When I’m interviewing, I’m never going to ask those cliché questions. Instead, I’ll ask Kobe Bryant if I can come and stay at his house. Being a little bit different makes people remember.

…There used to be this idea that broadcasters were all supposed to have that same deep, serious broadcaster voice, like the classic newsman. I think with all kinds of people creating their own content, that is changing, and that’s a great thing. Authenticity is so important and that’s what I would say to people just getting into broadcasting. Sometimes you’ll see young students trying to sound as if they are Brian Williams [note: Canadian Brian Williams, not American Brian Williams] and you want to tell them to just be themselves. So what if you have a nasally voice, or whatever you have? Of course, if a subject is serious, it needs to be treated that way, but if you’re reporting on the opening of the CNE, have fun, open up, be a normal person.

Here’s an example of some of that, from Richards’ Cabbie Presents TSN series, seeing him talking to NHL players about “crossing the line” (and showing a past incidence of Tyler Seguin pranking him with pink Gatorade):

It’s certainly notable to see Richards returning to Canadian media, and to see him doing so with Sportsnet rather than his more recent Canadian employers at TSN. It’s also interesting to see him describe this as a betting-focused role; that’s a lot of what he’s been doing in the U.S., but it’s not particularly what Canadian audiences know him for. But the Canadian sports betting market is just starting to take off following the legalization of single-game betting there this summer, leading to moves such as U.S. operator Penn National acquiring The Score.

We haven’t heard a whole lot yet about Sportsnet’s particular plans for sports betting coverage, but it makes sense that they’re going to dive into that more given the changes in the legal betting environment in Canada. And it’s notable that that video from Richards sees him with Micallef (shown at right above in the screengrab), who’s long been interested in talking about odds and betting (and who also worked with Richards at The Score back in the day). Richards notes in the video that he’s not going to be permanently in Micallef’s co-host chair (on Tim and Friends, which has had rotating co-hosts and guests following Sid Seixeiro moving on after 17 years in February), but that he will stop in from time to time. And it will be interesting to see just what Sportsnet does with gambling coverage, and what role Richards plays in that.