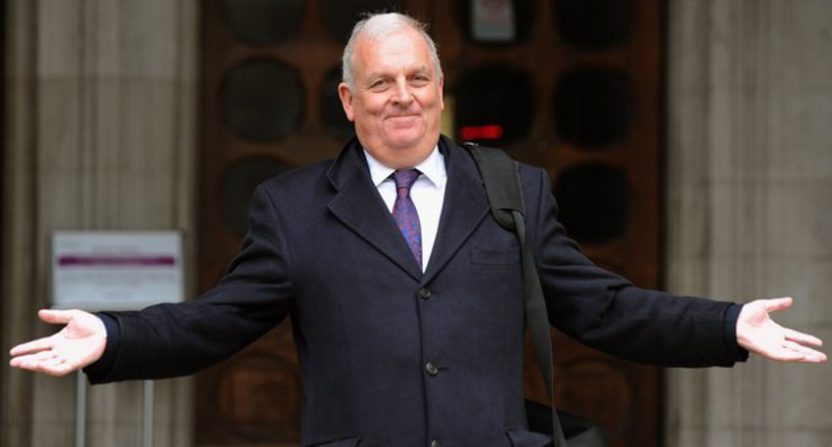 The Sun and Kelvin MacKenzie were involved in one of the worst journalism scandals in British sports history, and they’re under fire again. MacKenzie (seen above) was the editor of The Sun during its infamous “Hillsborough: The Truth” article that blamed Liverpool fans for the 1989 Hillsborough disaster. He’s now a columnist for them who decided to compare Everton midfielder Ross Barkley (who was hurt in what his lawyer called an “unprovoked attack” at a Liverpool bar last weekend) to “a gorilla at the zoo” and make fun of the city of Liverpool at the same time.

As Harry Cockburn of The Independent writes, MacKenzie was eventually suspended by the paper Friday evening. Everton has also banned The Sun from their stadium and practice grounds:

The police are investigating, so there could be further repercussions for MacKenzie as well. Here are more details on the initial incident from the BBC:

In an article on Friday, Sun columnist Kelvin MacKenzie compared Barkley – who has a grandfather born in Nigeria – to a “gorilla at the zoo”.

Police confirmed they were investigating the “full circumstances”.

MacKenzie targeted both England international Barkley and the city of Liverpool in the article – which has since been taken off The Sun website – saying:

Barkley is “one of our dimmest footballers”, also calling him “thick”.
His eyes make him “certain not only are the lights not on, there is definitely nobody at home”, adding: “I get a similar feeling when seeing a gorilla at the zoo.”
Men with similar “pay packets” in Liverpool are “drug dealers” and in prison.

Liverpool Mayor Joe Anderson told BBC Sport he reported the article to the police for a “racial slur”.

Speaking to BBC Sport, Anderson said: “Not only is it racist in a sense that he is of mixed-race descent, equally it’s a racial stereotype of Liverpool. It is racist and prehistoric.”

That was made even more racist and prehistoric by the paper’s photo choice:

On The Sun website the article was put up with a picture of Mr Barkley captioned: “Could Everton’s Ross Barkley represent the missing link between man and beast?”

Yeah, that’s problematic, and it’s understandable why people are going after MacKenzie here. And this isn’t new; as mentioned above, MacKenzie and The Sun both have a troubled history, especially when it comes to their Hillsborough coverage. The full story of how The Sun blamed Liverpool fans despite evidence to the contrary, leaving a shadow that wasn’t fully repealed until last year’s inquests concluded that fans bore no blame, is detailed in films like ESPN’s Hillsborough, but suffice it to say that MacKenzie (who eventually apologized for the paper’s coverage, but not until 2012) and The Sun both don’t come off well.

This latest incident has both MacKenzie and the paper under fire again, and deservedly so. This was an incredibly stupid analogy to make and publish, and both deserve blame for that. And they didn’t make it better with their further comments. The paper’s “we didn’t know” apology doesn’t resonate well, and neither does MacKenzie’s non-apology:

“The views expressed by Kelvin Mackenzie about the people of Liverpool were wrong, unfunny and are not the view of the paper.

“The Sun apologises for the offence caused.

“The paper was unaware of Ross Barkley’s heritage and there was never any slur intended.

“Mr Mackenzie is currently on holiday and the matter will be fully investigated on his return.”

But Mr MacKenzie has responded to say he did not know of footballer Ross Barkley’s family background and added that it was “beyond parody” for critics to describe his article as “racist”.

No, it’s not “beyond parody,” and MacKenzie should be well aware that he should never compare anyone to a gorilla. Most analogies comparing athletes to animals aren’t going to end well, but a gorilla reference is perhaps particularly bad given the long history of linked slurs there. That’s not unknown, either, perhaps especially in English soccer, where the extensive history of racist incidents involves plenty of references to gorillas and bananas, including Liverpool’s John Barnes backheeling a thrown banana off the pitch in 1988 while Everton fans chanted at him and a Chelsea fan being banned for making a monkey gesture at Manchester United’s Danny Welback in 2012.

It’s worth noting that this police investigation may not be minor. There can be serious consequences for racist speech in England; a university student who made racist remarks on Twitter after Bolton’s Fabrice Muamba collapsed during a 2012 FA Cup match was jailed for 56 days. We’ll see if the police wind up taking any action against MacKenzie, or if the paper delivers any further punishment to him beyond this suspension. But for many, this will be just the latest negative mark against his name.