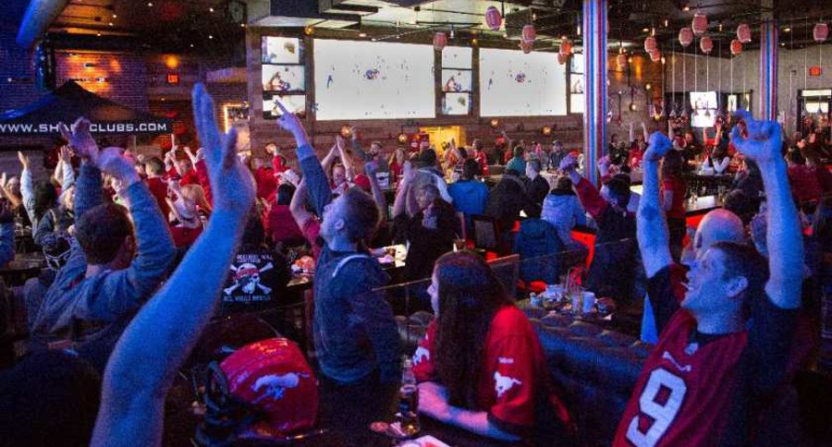 Watching a game at a bar or restaurant in Canada may soon become much tougher. Bell and Rogers, TV providers which also own TSN and Sportsnet respectively, are planning to pull their sports channels from packages available to businesses with a liquor license and offer them in a separate add-on package. As Scott Stinson of The National Post wrote this week, that new package is going to be quite pricey, starting at $120 Canadian ($90 U.S.) a month for even smaller bars in addition to the existing package prices they’re already paying:

Smaller bars — less than 100 seats — will be charged about $120 monthly for both channels on top of existing fees, and the cost increases according to seating capacity. The new prices — not that anyone was keen to put them on the record — will also apply to customers who subscribe to those channels through a third party like Shaw or Telus. Shaw confirmed Tuesday that the new prices are set by the channel owners, regardless of service provider.

It has been tough times for Canadian telecoms lately, with both Rogers and Bell conducting substantial layoffs, and both faced major challenges; Rogers’ ratings on their expensive hockey contract haven’t been as good as hoped, and they’ve drastically revamped their magazines and their publishing strategy (including closing down Sportsnet), while Bell lost a lot of money on the Super Bowl this year thanks to the CRTC decision to prevent them from blocking the U.S. feeds with U.S. ads, (their audience dropped 39 per cent, which was still a major blow, even if it wasn’t as bad as many expected) and hasn’t done as well with CFL ratings as they would have liked. Canadian sports audiences in general haven’t been great (outside of the Rogers-owned Blue Jays, which have seen huge upticks in the last couple of years), which hurts too, and there’s plenty of cord-cutting in Canada as well. So it’s understandable that they’re looking for new revenue sources.

However, trying to extract more from restaurants and bars this way could backfire. Yes, if everyone, or even half of the businesses with liquor licenses, goes along with this, then that’s a good amount of new revenue. And there undoubtedly will be bars willing to pay the price, especially larger chains of sports bars and restaurants. There might well be plenty of bars not specifically focused on sports that just opt to go away from showing them, though, and it won’t be an easy decision for many; do they pay up for these kinds of extra costs, or do they run the risk of losing customers who want to see games and are annoyed when they’re not on? And do the bars that opt to pay pass along the costs to customers, through charging cover for big games or otherwise increasing food and/or beverage prices?

That last scenario could really create some backlash against Bell and Rogers, but it’s notable that there’s been plenty of popular backlash already even without any specific details of how this will affect consumers. This is not a popular move, and it’s easy to see why. It could lead to smaller bars being unable to show sports (and thus, reducing patrons’ choices), and it could lead to more expensive nights out at bars (through cover or increased prices, thus impacting patrons’ wallets). Neither of those things seems good for consumers, and they already had plenty of reasons to dislike these telecoms in the first place.

It’s not entirely clear how this compares to the situation in the U.S., as that situation seems to vary substantially from bar to bar and provider to provider. Some business packages specifically advertised as for restaurants and bars say that they include ESPN, ESPN2 and more at much lower costs than the additional costs being discussed in Canada (including DirecTV’s $61 and $63/month packages, which would translate to around $84 Canadian a month at current exchange rates, and Comcast’s $85/month package, which would translate to $113 Canadian). Remember that those mentioned U.S. costs are for the entire TV package, too; bars in Canada are being asked to pay at least $120 Canadian ($90 U.S. ) a month for sports on top of their TV regular packages. But, Awful Announcing has heard from some U.S. bars who have to pay pricey extra costs for channels like ESPN; it’s unclear just how pricey, but charging extra for sports doesn’t appear to be unknown south of the border either.

In any case, though, this Canadian move is certainly new, and it’s certainly more extreme than what we’re seeing in many American situations. It’s already generated substantial backlash, but we’ll see if that backlash accomplishes anything. And if it doesn’t, and if Bell and Rogers wind up getting lots of bars and restaurants to pay them the extra fees they’re looking for, some U.S. networks might take inspiration from that. Bell and Rogers have the advantage of being TV providers as well as owning TV networks and of working in a country with less competitors, so it wouldn’t necessarily be easy to pull this off elsewhere, but if they can turn it into another big revenue source, U.S. networks may try to follow suit.

[The National Post; photo is of Calgary fans watching the 2014 Grey Cup at Sharks Sports Bar and Grill, from The Calgary Herald]