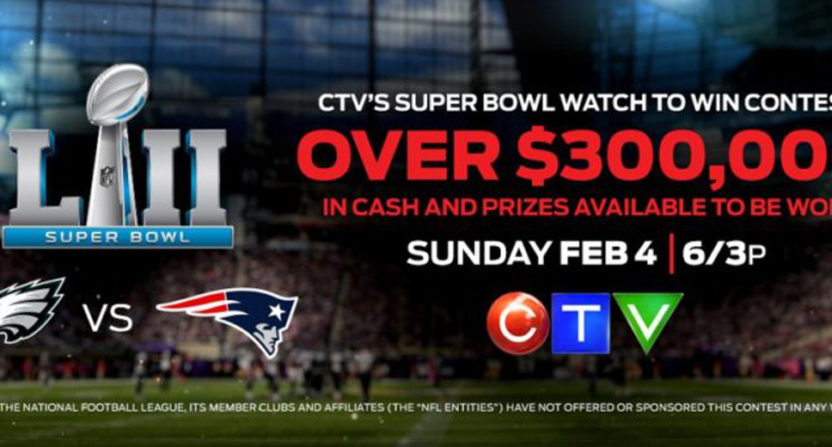 The results are in for the second Super Bowl where Canadians were allowed to watch American ads, and they’re about the same as the last time around, which comes as a big financial hit for Canada’s Bell Media. As per Emily Jackson of The National Post, Bell pulled in an average of 4.45 million viewers across CTV, CTV Two and TSN2 for Super Bowl LII, which is close to the 4.47 million they recorded last year.

But that’s a long way (almost 40 per cent) below the 7.32 million they had in 2016, the last Super Bowl of the simultaneous substitution (simsub, the policy of allowing Canadian networks to sub their own ads onto American feeds of the same event; the Canadian Radio-television and Telecommunications Commission banned that for the Super Bowl beginning in 2017 following longstanding viewer complaints) era. And Jackson’s piece includes Bell spokesperson Scott Henderson talking about the financial implications that created (a loss of around $11 million Canadian, or $8.73 million U.S.), and how Bell is still pushing for this to be overturned:

“The decision has had a significant negative impact on national and local Canadian advertising for the game, and reduced investment by advertisers adversely affects the broader Canadian broadcasting and creative community,” Henderson said in an email.

In 2017, Bell said the ad policy cost it $11 million. It also blamed it, in part, for dozens of layoffs at local TV and radio stations around the country.

Despite efforts to entice Canadians to watch Bell stations with perks including $300,000 in contest prizes, the viewership volume did not rebound this year.

“It can be difficult to compete when U.S. brands are allowed to advertise to Canadians for free,” Henderson said. “We continue to pursue every opportunity to manage these impacts and resolve an unfair decision.”

Given that the 2018 audience was almost identical to the 2017 one, it seems likely the cost to Bell would be about the same. (Now, that’s a number supplied by them, so it should of course be taken with a grain of salt, but it sounds within the realm of plausibility given the magnitude of the audience loss involved.) And that’s certainly not an insignificant number. It is positive for Bell that they were again able to keep around 60 per cent of the recent Super Bowl audience, even given an extra year of discussions of how Canadians were now able to watch the American feed and its higher-budget, more content-like commercials; that’s more than many expected when the end of Super Bowl simsub was announced, and that suggests that Bell’s initiatives to keep Canadians watching on CTV (specifically, that contest with $300,000 in prizes for viewers of the Canadian feed, plus original segments by Canadian comic Russell Peters) may be having some effect.

We also don’t know that the 40 per cent decline in 2017 and 2018 is solely about simsub. U.S. NFL audiences have declined in both of those years, and this year’s Super Bowl was the lowest-watched stateside since 2009 in terms of average viewers. Thus, it’s possible that some Canadians are doing the same as Americans and tuning out from the Super Bowl entirely, not switching to NBC. And it’s notable that as per Henderson, the Canadian feed beat the American one in some major markets:

In Toronto, Henderson said Bell’s stations delivered a 17.3 rating for audience ages 25 to 54 compared to a 7.8 rating for Buffalo’s NBC station. In Montreal, CTV and TSN2 had a 17.8 rating compared to 11.7 for NBC.

But this is still a major loss for Bell, and it’s understandable why they’re going to keep trying to get the CRTC decision reversed. And they have support from the NFL, as the Canadian NFL rights are nowhere near as valuable without Super Bowl simsub. The Supreme Court of Canada is still considering if it will hear Bell’s appeal, so that will be interesting to watch. If they do somehow hear this and reverse it, there will be plenty of celebrations in Bell headquarters, but plenty of upset Canadians who will again be forced to turn to the internet for U.S. Super Bowl ads rather than experiencing them live alongside American viewers. If the court doesn’t hear this or doesn’t overturn it, though, the 4.5 million viewer range may be closer to the new normal for Canadian Super Bowl ratings, and that will have impacts both for Bell and for the NFL going forward.