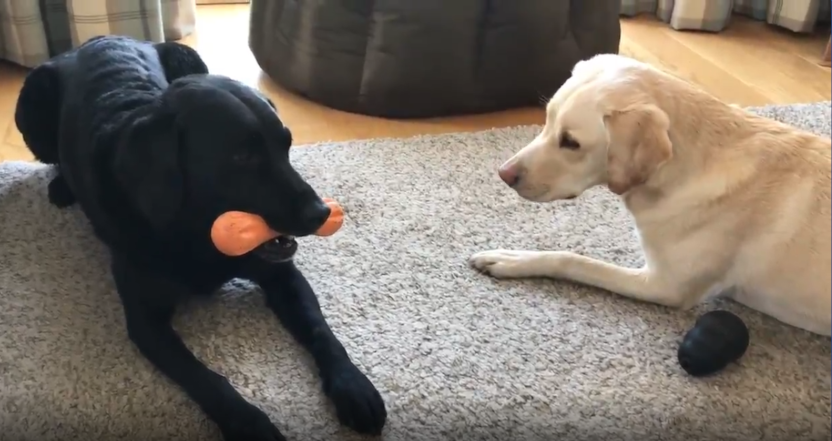 We’ve seen all sorts of announcers calling things from home, from Brandon Gaudin’s “One Shining Moment” video to Jon Miller and Dave Flemming broadcasting a Strat-O-Matic game to the A’s broadcasters calling submitted baseball footage to Joe Buck calling submitted anything footage (but not that). But Scottish BBC broadcaster Andrew Cotter has been particularly fun to follow on Twitter for his videos of his dogs Olive and Mabel. On March 27, he called them eating as if it was a race:

On March 28, he narrated their dreams:

Let sleeping dogs lie, without commentary. Or dignity. But at the moment everyone needs their escape. pic.twitter.com/ynPTpWCZh4

On April 1, he discussed the Wimbledon cancellation, showed Mabel playing with a bone, and said he’d be ready to call that by July:

Wimbledon going as well – by the time July comes around I probably will be ready to commentate on this kind of thing. pic.twitter.com/bbhWUKZ6XO

But that came much sooner than July, with this delightful narration Thursday of Olive and Mabel eyeing the same toy as if it was the last few minutes of a soccer match:

Some sports are slower. More about the strategy. pic.twitter.com/JMBaGJ1tSd

“So into the final minute and Olive in possession, but this is where Mabel is strong, chasing the game, using that intensity. We saw it in the semifinal, staring at a slightly torn cloth rabbit for almost seven and a half minutes. And perhaps a few signs of overconfidence from her rival, a bit of showboating. Needs to be careful. And there’s the change from the classic hold. Still placed on the outside, though, great technique. And a glance at the youngster, who shows little emotion. But her mind will be empty.”

“20 seconds to go now, Olive closing in on victory, and that coveted prize of being told she’s a very good dog. One paw to control, and a switch. Now Mabel sensing this might be a chance! Still waiting, still believing. And you wonder what Olive is doing here! Only has to hold on. Going to the upright now, high tariff with no opposable thumb, high risk at this stage! And it’s gone, and Mabel takes it! No mercy from the younger dog, who takes this victory just as time runs out! A famous win built on patience and sheer belief. For Olive, only thoughts of what might have been, but only herself to blame. She has given this one away, and that will hurt most of all. Bad dog.”

And incidentally, I have never really called this one a bad dog. https://t.co/Q00EJT7K4i

Looked forward to this for a while.

Very well done by Cotter indeed And it’s nice to see a longstanding rugby, golf, and tennis broadcaster finding some things to call while those sports are all on pause, and entertaining many of us in the process.