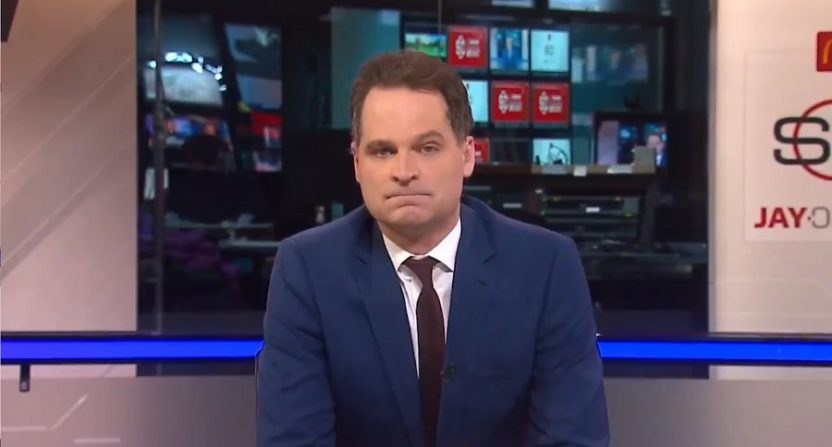 Following TSN’s layoffs of several personalities on Thursday, Jay Onrait was back on the air for SportsCentre on Sunday night. Onrait acknowledged the layoffs of Kristian Jack, Natasha Staniszewski, and head writer Brendan Halloran, but left his more poignant comments for the departures of long-time colleagues Producer Tim and Dan O’Toole.

In the emotional segment, Onrait said that him and O’Toole felt old because of fans telling them that they grew up watching the pair on TV, but they also felt grateful because people watched them and stuck it out.

Jay takes a moment to express a heartfelt thank you to the viewers, and especially Dan O'Toole, longtime co-anchor and great friend. ❤️ pic.twitter.com/xdkhmvSjN2

“When we started on this network, together, almost two decades ago, we had one priority: to be ourselves on television. And it only worked because you guys watched us. Because let’s face it: our show was pretty weird. But you made us part of your routine with your families all across this country in the morning and at night, and Dan and I will always appreciate that. On behalf of Dan and Tim and myself, and everyone on this amazing crew, thank you.”

It’s going to be weird talking about Jay without Dan, and I’m sure it’s going to be even stranger for Onrait without his long-time cohost next to him.

As for the future of Onrait’s SportsCentre, will TSN let him do his own thing as we’ve seen with Scott Van Pelt’s SportsCenter on ESPN, or will he simply be the primary anchor on a more standard SportsCentre? If it’s the latter, it seems like a significant missed opportunity from TSN.