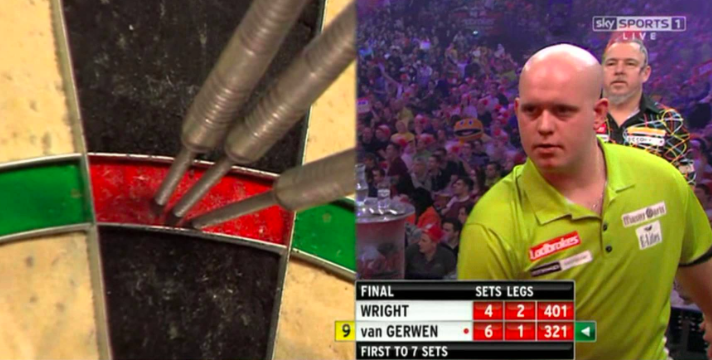 This holiday season, sports fans are in for a treat. For the first time, BBC America will be providing regular coverage of the World Darts Championship every Saturday afternoon. The tournament stretches from mid-December to the beginning of the new year and is the biggest championship in world darts.

I know what you’re thinking… darts? Darts? You really want me to spend my weekend watching darts? Yes!

Darts combines the everyman populism of poker with the non-stop crowd chants of soccer. Combine that with theatrics more akin to professional wrestling and the top players who have the precision skills that could match any other top sport. Above all, darts has created an environment and a spectacle that is unlike anything you’ll see across sports. Here’s why you should be making a point to tune in this month…

With the concentration needed to hit the target in darts, you would think the audience would be like what you’d see in golf — quiet and subdued. Darts is the exact opposite. It’s about as far away as you can get from the patrons at Augusta National.

There are lots of chants and cheers, lots of costumes, and lots of beer. The fans will sing throughout every match with European soccer-style cheers like “Stand up if you love the darts.” If players are missing too many darts at double to win the leg or the fans see gamesmanship they don’t like, they can also take an active role in the match by getting on a player. The action really gets interesting when the players begin interacting with the crowd, either trying to pump up themselves up or egg the fans on.

Here’s the amazing thing that darts has borrowed from the world of WWE. Before each match, the participants are introduced like it’s a championship match. Each player even has their own theme song as they make their way to the stage. Many times, the crowd will sing along with the most popular players and themes like Dutch legend Raymond Van Barneveld coming out to the classic rock anthem “Eye of the Tiger.”

Mighty Mike, Snakebite, The Flying Scotsman, SuperChin, The Gentle, The Power, Jackpot, Chizzy, Barney, and The Wizard. That’s not the newest edition of the Justice League or the Avengers. Instead, it’s the nicknames for the Top 10 darts players in the current world rankings.

It’s not just the top players in the world that get a creative moniker, though. Everyone gets a nickname. The 32nd-ranked player in the world, James Wilson, debuted a new nickname for this year’s World Championship: “Lethal Biscuit.” How can you not be enamored by a sport that features a competitor willingly referring to himself as “Lethal Biscuit”?

With those kinds of nicknames, you can imagine that the players are encouraged to show quite a bit of personality. This is what the second-best player in the world, Peter “Snakebite” Wright, looks like in the midst of competition.

Then there’s “The Muffin Man,” Steve Hine. Before you think that’s some kind of play on words or something, he actually is a baker. And he brings muffins to the stage before his matches. As colorful and as large as these personalities are, there are times when things get a little heated on stage as well, which can make for some very interesting television.

One of the first things that will immediately hook you to darts are the announcers. From the referee on stage belting out a “OOOOOOOOOOONNNNEEE HUUUUNNNDRREEEEDDD AAAANNNDD EIIIIGGHHHHTYYYYY!!!!” to the play-by-play team with their unique turns of phrase, the announcers certainly add to the overall atmosphere. In fact, the World Championship trophy is named after the late announcer Sid Waddell, who is credited with helping darts experience great growth in popularity over the years.

There is a repetitive nature to darts. Each leg is a game of 501 with the players trying to count down to zero, finishing a leg by hitting a double on the outer ring or the inner bullseye. It’s much easier said than done though to hit those targets around the board, especially with thousands of people watching and the pressure of competition. One of the best sights in darts is the perfect leg of 501 in just nine darts. There have been nine of those in the history of the PDC World Championship.

One of the most incredible feats in darts history was a few years ago at the World Championship when World No. 1 and defending champion Michael van Gerwen almost did the unthinkable, finishing one dart short of two back-to-back nine darters.

A close finish to an important darts match can be one of the most nerve-wrecking things to watch as a sports fan. Hitting a winning double takes such precision and poise, but when it goes wrong there is absolutely nowhere to hide. At this year’s Premier League championship final, Peter Wright missed six darts at double to win against Michael van Gerwen and ended up losing in an 11-10 classic.

Darts can be cruel, it can be exhilarating, and it can be everything in between. And that’s why you should be watching.