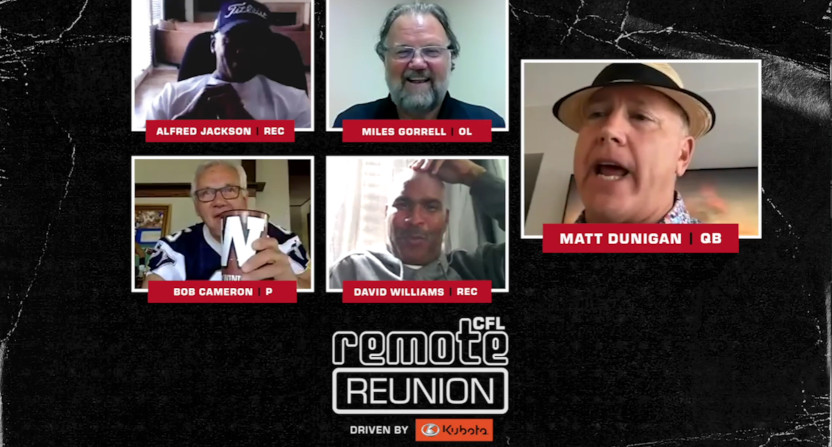 It’s always cool to see newly–discovered footage of an old sporting event, and that’s what recently happened with a momentous 1994 CFL game. The Edmonton Eskimos-Winnipeg Blue Bombers clash on July 14, 1994 saw Winnipeg quarterback Matt Dunigan (now a CFL on TSN analyst, a role he’s held since 1999 except for a 2004 stint as the Calgary Stampeders’ GM) throw for 713 yards, a professional football record, and lead the Bombers to a 50-35 win over an Edmonton team that had beaten them in the previous year’s Grey Cup (albeit with Dunigan injured for that game). But the July 14, 1994 game wasn’t televised, and while some highlights had been available, there wasn’t a full-game broadcast for Dunigan and his teammates to rewatch.

That’s now changed thanks to a combined effort from a lot of people in Canadian football. Adam Marshall, CFL.ca’s coordinator of video content, went looking for this game earlier this year, but TSN only had a limited highlights reel. However, Mark DeNobile of the Canadian Football Hall of Fame found a VHS copy of the in-stadium feed of the whole game. Marshall then converted it to digital, and with the help of original stat sheets from BlueBombers.com’s Ed Tait (who had covered that game for The Winnipeg Free Press, but who actually only got that scoresheet recently from former Bombers’ OC Mike Kelly), set up the video with timestamps and the score. And that led to Dunigan recently rewatching it with 1994 teammates Chris Walby, Miles Gorrell, David Williams, Alfred Jackson and Bob Cameron as part of the CFL’s Kubota-sponsored “remote reunions” series. He spoke to CFL.ca’s Chris O’Leary about what that meant to him, especially as the grind of the season meant he didn’t get to enjoy it as much at the time:

“The train just keeps on moving,” Dunigan said of the players’ mentality in the moment.

“It just keeps on rolling and you don’t have time to reminisce, to think about what just happened. You’re just on to the next one. You make the corrections, you game plan for the next game and your focus is elsewhere.

“As time goes on, I think you do have the opportunity to reflect and then you get to see it in different aspects as time passes. It’s been a pretty unique process since ’94 to watch this memory struggle and move forward to stay alive.

It’s good because it was one of those magical nights and I’m not out there by myself. We’re a football team that had to regroup from the loss in the Grey Cup and the first regular-season game on the road (in 1994) to BC. Our focus was on the task at hand and that never changed.”

Dunigan’s stat sheet for that night, plus a detailed breakdown of it, is available in this Winnipeg Free Press piece from Tait six years ago around the game’s 20th anniversary. He finished that night with 33 completions on 52 attempts (63.5 percent) for 713 yards and five touchdowns with two interceptions, with a longest play of 88 yards. Remarkably, Dunigan broke a record set only the year before by B.C.’s Danny Barrett, who threw for 601 yards in an Aug. 12, 1993 game. But before that, the previous high points in the CFL were 586 from Montreal’s Sam Etcheverry in 1954 and 490 from Edmonton’s Lindy Berry in 1950.

It’s very cool to see the team effort to put together this video of such an important moment for the CFL, and it’s neat that Dunigan and his 1994 teammates were finally able to watch a full version of this game. And this remote reunion series is a good move by the CFL, too; they’re not playing this season thanks to the COVID-19 pandemic, but these virtual reunions of teammates are a neat way to look back at some remarkable moments in the league’s history, and a good way to stimulate some CFL discussion.