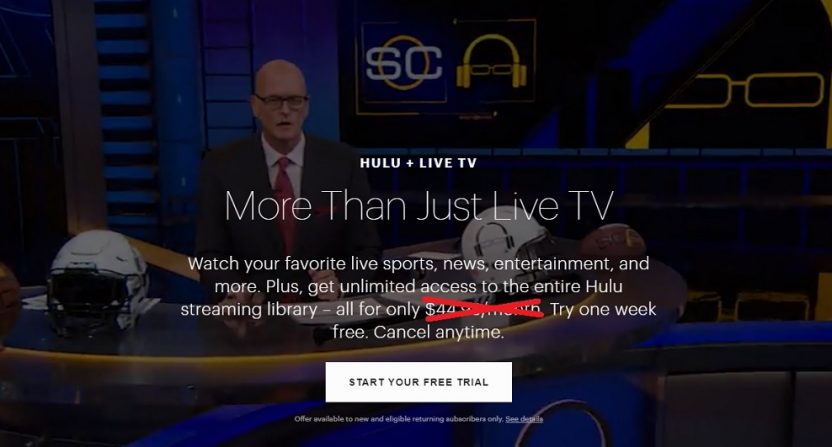 Days after the much-hyped and long-awaited launch of Disney+, another streaming service under the larger Disney umbrella is getting a price hike.

Hulu Live TV, which Disney maintains full control of, is hiking its price by $10/month, up to $54.99. The new rate is effective as of December 18th.

Disney rationalized the price hike by touting its streaming library and “ongoing enhancements.”

This is just the latest in a long line of price hikes by streaming services this year. Hulu itself upped its monthly live TV price from $40 to $45 in February. DirecTV Now reworked its plans and ended up giving customers fewer channels for more money. Then, its name was changed to AT&T Now, and prices spiked once again. fubo increased its monthly cost from $45 to $55. YouTube TV’s price went from either $35 (for grandfathered customers) or $40 per month to $50. PlayStation Vue hiked its prices by $5 a month over the summer, and announced last month that it would shut down at the end of January.

Once again, the big winners are….the cable carriers that many customers were fleeing in the first place. If a streaming service is going to cost you $50 anyway, the cable bundle (which can cost something like $200, depending on which cable and internet package you choose) is becoming less of a heist (especially when you consider that you need an internet package to effectively use your streaming provider anyway). We’re one or two more price hikes away from the point where a streaming service isn’t actually a better deal than the cable bundle at all, and might actually end up costing you more money if the internet providers hike the prices of their internet-only packages.

What a world – streaming + internet might end up being a worse deal than cable + internet in 2020.