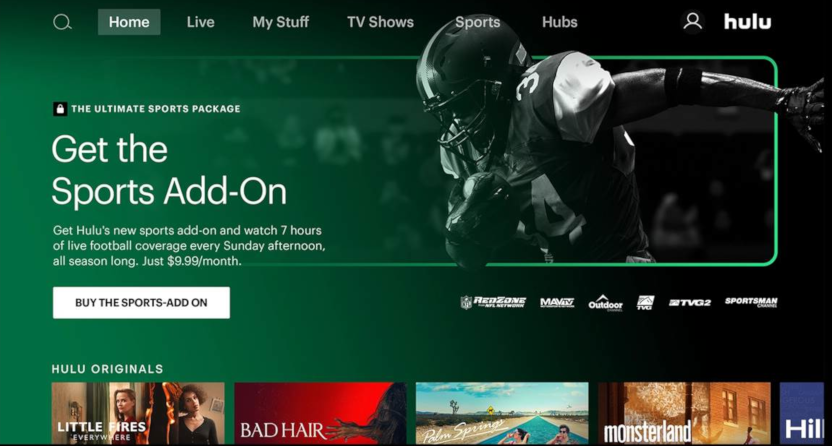 Internet-based multichannel programming distributors (MVPDs) are making plenty of inroads on traditional cable and satellite bundles, but one challenge there has been with particular sports networks. However, some of that is starting to change, and the latest case is NFL Network and NFL RedZone being available on the Hulu+Live TV packages. The NFL signed a multi-year deal with Hulu back in April that included NFLN and NFL RedZone coming to Hulu+Live TV by August 1, and now, just a few days ahead of that date, Hulu has officially added those channels:

Hulu’s new Sports Add-on – featuring six sports networks – will also launch today to serve as the ultimate sports destination packed with a collection of live games, recent highlights, sports news and events. For $9.99 per month, Hulu’s Live TV subscribers can add NFL RedZone, Outdoor Channel, Sportsman Channel, MAVTV Motorsports Network, TVG and TVG2 to their live TV line-up. Football fans can tune into NFL RedZone every Sunday during the regular season to watch host Scott Hanson deliver seven hours of live football action. For super fans who are ready to kick-off football season early, NFL RedZone will replay all NFL RedZone programming from the 2020 NFL season from August 23rd through September 8th before the 2021 season begins. Plus, fans of motorsports, horse racing and other outdoor sports like competitive fishing can catch all of the action year-round.

“We are excited to bring NFL Network and NFL RedZone to Hulu + Live TV subscribers,” said Hans Schroeder, EVP and Chief Operating Officer of NFL Media. “One of our top priorities as a League remains broadening the distribution platforms for NFL content, and so we’re very pleased to bring our lineup of award-winning shows and live games to Hulu’s live subscribers.”

It’s also interesting to see Hulu launching a specific Sports Add-On package. The main feature here will be NFL RedZone, but the other listed channels do have their fans as well. And Hulu has expanded their involvement in sports on several fronts recently, from broadcasting games (through combination deals with ESPN+) to planning to air series on the Los Angeles Lakers and Mike Tyson. We’ll see where they go from here, but this is a notable further step into sports from them.