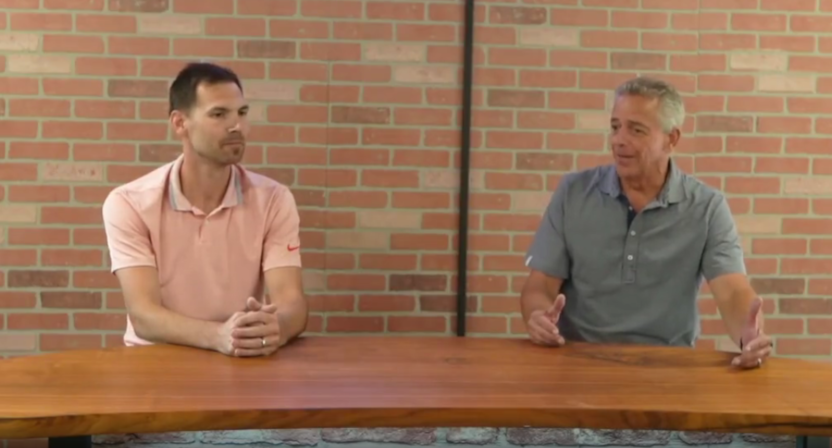 Thom Brennaman’s homophobic slur on a hot mic on a Cincinnati Reds’ broadcast last August led to him becoming a meme for his home run-interrupted apology, being pulled from Fox’s NFL broadcasts, meeting with LGBTQ broadcasters and activists to discuss his comments, eventually resigning from his Reds’ role with Fox Sports Ohio, and then taking a play-by-play job for the Puerto Rico-based Roberto Clemente League.

Almost a year later, Brennaman (seen at above right) has now signed a deal to call Cincinnati-area sports again. He’ll be doing that in a very different manner, though; he’s signed on to call local high school sports for Chatterbox Sports, a website focused on Cincinnati-area sports, it has some ad-supported content and some paywalled subscribers-only content). Here’s a Twitter video the site put out announcing that late Tuesday:

Homerun Hire. Some might even say it’s a deep drive to left. pic.twitter.com/VDmlAT5jlT

“Hi, we’ve got a big announcement, and I’m super excited to share that with you. Obviously, we’ve had a lot of supporters throughout the years, and I’m sure that we’ll have some more supporters, and maybe some that feel different. Today, we’re going to announce that Thom Brennaman is going to join us. And over the past two months, I have done a lot of research to see what kind of person he is; was the comment that he made, is that who he is, or is it just a mistake like all of us have made at some point? And the conclusion that I’ve come up with, quite frankly, is that he’s a great person who made a mistake that I know he’s deeply regretful for.”

“And we’re excited to allow him another opportunity to put a headset on again. And the biggest thing that I hope people take away from this is that we are not downplaying what was said, what people feel from that. More importantly, in my opinion, I hope we don’t live in a society where we’re essentially going to try to, I don’t want to use the word ‘cancel,’ but we’re not going to end people’s careers and think that’s going to solve any kind of problem.”

“Chatterbox has been about trying to produce the best content to give student-athletes the best platform that we possibly can. As I’ve said before, he’s deeply regretful for the mistakes he’s made, and I would challenge anybody, quite frankly, to look into the work that he’s done since he’s made that mistake. But at the end of the day, it is what it is, and I feel like he is somebody that will be a big asset to Chatterbox. And I’m super excited to bring him on board.”

“But I’m just so grateful and excited. I grew up here in Greater Cincinnati. I know what high school football, high school basketball and high school sports mean to this area. This is what I was doing at Channel Five when my career started. Here we are coming full circle getting back out to high school sports again. And I’m excited. Thank you!”

Fowler then says “We’re glad to have you, and I appreciate you jumping in.” And Brennaman closes with a reference to his infamous interrupted apology: “And by the way, I think Castellanos just hit a home run to left field.”

We’ll see how Brennaman’s hire is received by Chatterbox users. But it’s certainly notable that he’s back calling games in the Cincinnati area again.