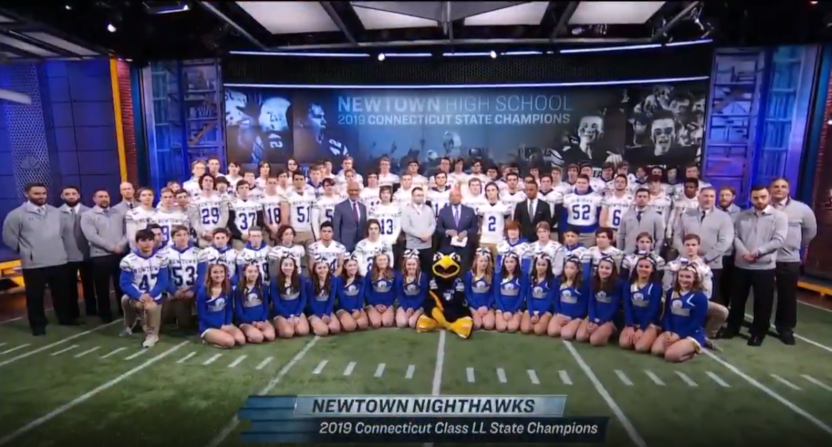 The Newtown Nighthawks won their first Connecticut state championship in 27 years in extraordinary style Friday, with quarterback Jack Street finding receiver Riley Ward for a 36-yard final-play touchdown that gave them a 13-7 win over the Darien Blue Wave in the Class LL title game. That win was even more notable thanks to it coming on the seventh anniversary of the Sandy Hook Elementary shooting in Newtown; some members of the Nighthawks had attended Sandy Hook Elementary, and Newtown linebacker Ben Pinto’s younger brother Jack was killed in that shooting.

The Nighthawks (13-0) are your Class LL state champions. pic.twitter.com/qCIF3E5Ruu

The story here attracted some wider media attention. Ahead of NBC’s Sunday Night Football broadcast, NBC executives reached out to the school, and brought Newtown players, coaches and cheerleaders into their Stamford, CT studios for a feature during halftime of Sunday night’s NFL game.

Listen to what it means to the small Connecticut town as we caught up with them at halftime. pic.twitter.com/Mu3h2Gd6Cu

There was also a further digital-only feature on the team:

Our time with the Newtown team was limited because of halftime @SNFonNBC but here is a longer visit with the Connecticut class LL state champions. Feel free to share, this group deserves our cheers. https://t.co/3dHuwA0tSw

John Ourand of Sports Business Journal has more (via e-mail from NBC) on how that happened:

“Driving back to New York after the Army-Navy game, Mike Tirico and producer Rob Hyland watched the viral video of Newtown High School’s first state title in 26 years. The next morning, Tirico texted Hyland suggesting that they invite the coach and some key players to appear on ‘Football Night in America’ that evening. Hyland agreed and reached out to the school, inviting the entire team and anyone else they wanted to bring. NBC Sports’ director of production planning Ben Davies and senior director of administration Terri Leopold handled the logistics.”

Around 85 players, coaches, cheerleaders, school officials and one mascot climbed on board two motor coaches at 4:30pm ET for the hour drive to NBC Sports’ Stamford studio. NBC: “When the group arrived, they received NBC Sports apparel, met Tirico, Tony Dungy and Rodney Harrison and were given a tour of the production facility. You want some stats? They ate 35 pizzas and six dozen cookies.”

It was certainly interesting to see this team spotlighted on the SNF halftime, and then given a more in-depth feature on NBC’s digital platforms. And that wasn’t the only major media recognition they received. On Monday, Around The Horn host Tony Reali closed that ESPN show with some thoughts on the Newtown team:

He also added a further digital segment on them:

That’s a remarkable amount of national sports recognition for a high school football game, but there’s certainly some merit to discussing this Newtown story and what this championship means to the team and the community. And it’s interesting to see two national networks cover it so quickly. Yes, both ESPN and NBC have much of their production based in Connecticut in the first place (which is what allowed NBC to bring this team in on short notice), but this is certainly a story where bringing it to the attention of a wider audience feels worthwhile. And both networks did a good job with that. This wasn’t the programming you’d necessarily expect from either Sunday Night Football or Around The Horn, but both made the choice to feature it, and both did so in a smart way.