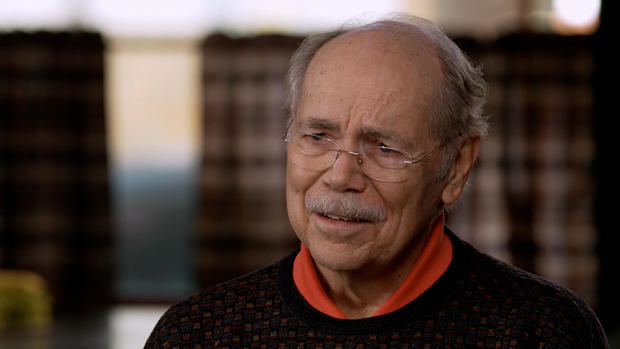 CBS’ weekly newsmagazine 60 Minutes hits on some interesting sports stories from time to time, and they certainly did that this weekend with a profile on Dave Kindred. Kindred, a long-time writer for The Louisville Courier-Journal, The Washington Post, The Atlanta Journal-Constitution, The National Sports Daily, The Sporting News<, Golf Digest, and more, donated his archive of materials to Illinois Wesleyan University back in 2016. But the last decade has seen him writing on an interesting new topic; high school girls’ basketball in Illinois, specifically the games of the Morton Lady Potters. That’s discussed in Sunday’s 60 Minutes profile on Kindred, featuring correspondent L. Jon Wertheim, producer Michael Karzis, associate producer Julie Holstein, broadcast associate Elizabeth Germino, and editor Matthew Lev. Here’s a clip of that:

“This team did save me. This team became a community. It became my friends. My life had turned dark. They were light,” says writer Dave Kindred. He says covering the local girls’ basketball team has helped him during some personal tragedies. https://t.co/GKXl3NNqpE pic.twitter.com/M49H37JM9T

Here are some quotes from the piece on why this has mattered for Kindred amidst personal struggles:

Jon Wertheim: Apart from the sugar rush, what do you get out of this?

Dave Kindred: Well, the first five years, it was just the fun. Then things started happening, as– as they do late in life. Had a grandson who died. My mother died three months later. The next year, my wife had a catastrophic stroke that left her an invalid who cannot communicate. You know, so– even in the hospital, one of the player’s mothers– I was debating whether I should leave my wife in the hospital unconscious and go to a Lady Potters game. And the mother said, “You gotta go. You gotta go.” And she was right. You know, I went, and I—and what started as fun became life-affirming, you know? It’s– it’s what I am. It’s what I do.

Jon Wertheim: You’re someone who is precise with his words, and– and you said, “This team saved me.”

Dave Kindred: This team did save me. This team– became a community. It became my friends. My life had turned dark. You know, they were light. And I knew that that light was always gonna be there, you know, two or three times a week.

As anyone who has been around sportswriting for any length of time knows, Kindred has cast a long shadow through the years. He’s written incredible pieces on the Olympics, boxing, basketball, golf, and much more. So it’s really remarkable to see him turning to one high school girls’ basketball team, and covering it in such a comprehensive way (for the team website and his own Facebook page; he’s covered more than 300 games and written more than 500,000 words on this team, more than he wrote on any other subject other than Muhammad Ali), and taking his own meaning from it. And it’s great to see CBS feature that.