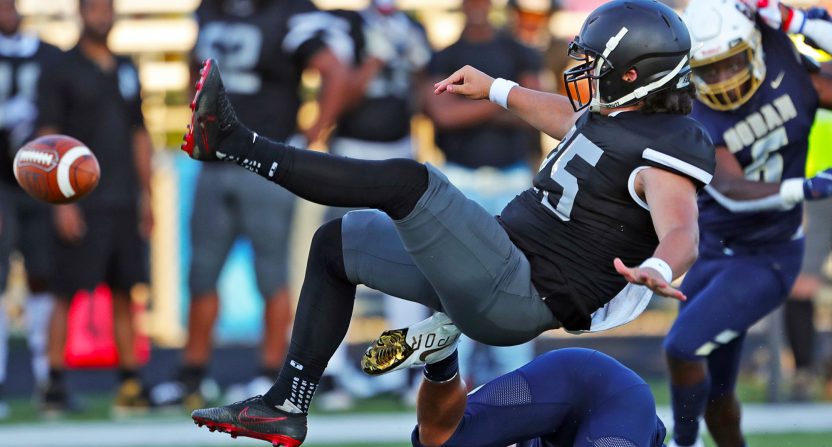 When Bishop Sycamore got demolished on ESPN by prep school powerhouse IMG Academy, it set off a series of alarm bells that have been ringing ever since. The shady details surrounding the “post-grad football academy” led to the head coach leaving while trying to tell people the school was not a scam. Meanwhile, the team was removed from future FloSports broadcasts, the Ohio governor said he’d launch an investigation, and reports of bad checks and unpaid debts ran wild.

While many people involved with the program were affected, there was another group of players and coaches who had to swiftly deal with the fallout as well. The eight schools that remained on Bishop Sycamore’s schedule immediately had to figure out whether or not they wanted any part of this press nightmare and what to do if the answer was no.

Since the answer was obviously “no” for all of them, let’s take a look at how the cancellation of their respective Bishop Sycamore games impacted them, perhaps learn a bit more about why these games were scheduled in the first place, and try to figure out why concerns about player safety and their opponent’s legitimacy weren’t vetted sooner.

Bishop Sycamore was originally supposed to play Johnson Central (KY) on Sept. 3, but canceled the game. Apparently, they couldn’t find a new opponent in time, so they didn’t play until this past weekend.

“We were aware of at the top of the team that they presented it to be,” Johnson Central Principal Justin Arms told reporters. “Similar to a high school prep team that did have the ability to recruit some athletes both regionally and nationally. However, come to find out it was definitely something much more than that.”

Duncanville was on Bishop Sycamore’s schedule for this past weekend but they canceled the game back on August 31 following the news about their opponent’s legitimacy. It does not appear that they were able to find a replacement opponent in time.

“Student safety is our top priority and I can’t ask our student-athletes to take the field next week without knowing more about who they will be facing,” said Duncanville ISD Athletic Director Dwight Weaver in a statement. “Our school district’s core values speak to honesty, integrity, ethics, and providing a safe environment for students. This situation calls into question many of those values, so we are canceling this game.”

“It was supposed to be our homecoming week, so we’d like to find another game,” St. Edward coach Tom Lombardo told USA TODAY. “It’s a glorified scrimmage, really, for the teams who are willing to play them.”

“We have reached out to other opponents, but now it’s just a matter of finding one. If we can’t, we’re not sure what we’re going to do. We may just take the bye week. They may not even be around by Week 6, so it leaves us in a very tough spot. It’s just far enough away that we have some time.”

St. Edward does not currently have a new opponent listed for that weekend.

Powerhouse DeMatha had Bishop Sycamore on their schedule for October 1, but that game has been canceled.

“We have been doing a lot of researching, and after discussing it with our coaching staff, we have decided to cancel that game with Bishop Sycamore because they have ineligible players and it would be a liability issue,” DeMatha Catholic High School president Fr. James R. Day told USA TODAY. “We think this is the right decision.”

DeMatha coach Bill McGregor provided a very candid explanation as to why a school like DeMatha would schedule a school like Bishop Sycamore in the first place.

“We’re high school coaches,” McGregor told the Washington Post. “You take things for granted. We’re all very, very similar. That was the last thing that ever entered my mind.”

McGregor also spoke with USA Today and offered up what feels like a naive point of view about the nature of high school football and the business surrounding it.

“This is high school football,” McGregor said. “You just assume that everyone is following the same high school federation rules and you agree to go play somebody.”

DeMatha appears to have found a replacement opponent for October 1 in Life Christian Academy out of Virginia.

While it is still listed on the MaxPreps site, but CBS Sports reported on September 2 that St. Thomas More had canceled this October 8 game.

St. Thomas More football coach Ernest Anderson told NBC News’ David K. Li that it had done “its due diligence” despite the fact that they had added Bishop Sycamore to the schedule in the first place.

“Our school did its due diligence about the situation. We gathered all the facts and decided to move forward,” said Anderson.

Anderson also spoke with CTInsider to provide some context on how schools like Bishop Sycamore exist and why schools like his would schedule them.

“I know coach [former Bishop Sycamore coach Ron Johnson],” Anderson said. “They played IMG last year and lost 56-6. In today’s culture, the optics of 58-0 on ESPN are going to look crazy. People have to remember IMG has the best players from all over the world with a billion dollars.

“Bishop Sycamore is a depressed school that is trying to emulate that without the program and without the proper funds. IMG is playing games with 80-90 kids and everyone can play. Bishop Sycamore is showing up with 26-to-30 and maybe 12 can really play. Nobody said anything last year. Being on TV and playing a game two days before, it was a firestorm.”

St. Thomas More is reportedly trying to replace the Bishop Sycamore game with a contest against Rock Creek Christian of Maryland. They might also end up playing one of their previous opponents a second time instead.

Liberty High School out of Henderson, Nevada, was scheduled to play Bishop Sycamore on October 15 but they canceled the contest back on August 31. Head coach Rich Muraco told the Las Vegas Review-Journal that “he assumed Bishop Sycamore was a serviceable opponent that would fill the gap in the Patriots’ schedule,” which is perhaps the most stripped-down realistic answer any of these coaches could give.

“Last spring they played some games; they were 0-6. I had an open week, and the guy who helps me schedule national games said there’s this new team out of Ohio, they’re trying to be like IMG, they want to play you guys.”

“When [The Nevada Interscholastic Activities Association] saw that (inquires into Bishop Sycamore’s legitimacy), they did some research to see if they are part of the Ohio Interscholastic Athletic Association, and they weren’t,” said Muraco. “That automatically canceled the game.”

Left unsaid was the fact that the NIAA apparently didn’t do this research when Bishop Sycamore was initially scheduled.

This independent Catholic high school out of Baltimore originally had Bishop Sycamore on their schedule for October 22. While all of the other schools were dropping them like a hot potato, St. Frances stayed relatively quiet for a few days. However, when NBC News reached out to Saint Frances Athletic Director Nicholas L. Myles and asked if the game was still on their schedule, he replied “No, it’s not,” and declined to elaborate any further. Okay then.

For what it’s worth, MaxPreps still has the game listed on their site. The school has not made any announcements on scheduling changes on their social media accounts either. As of now, the game is still listed on the school’s calendar of events for October 22.

The final opponent on their 2021 football schedule, Life Christian Academy is seen in football circles as the “legitimate” version of Bishop Sycamore. The two schools often show up on the same schedules of national powerhouses and Life Christian has even been floated as a replacement in one or two cases here. The big difference is that Life Christian’s players actually get the kind of P5 college interest that Bishop Sycamore only claimed.

When asked if the game was still happening, Life Christian head coach Charles Scott told Richmond.com “I highly doubt it” and that “We’re actively seeking to replace them.”

Interestingly, Scott didn’t want to fully close the door on Bishop Sycamore and seemed to imply it was possible that the extensive reporting done about the school’s improprieties could be proven otherwise.

“We would never put our kids in that type of situation where they’re saying they got older kids or they got guys that came from college to play,” Scott said. “Unless it’s unfounded, we’re not going to be a part of that.”

Scott also seemed to want to deflect and get away from Bishop Sycamore as fast as possible.

“I saw it, I was like wow … but you can’t dwell on that because it has absolutely nothing to do with us,” he said. “We’re just looking at our options for another game.”

Compiling all of these reactions and cancelations, a few trends certainly emerge.

One was the number of school officials talking about student safety and how, as soon as they learned Bishop Sycamore had older players on their roster, they immediately canceled the games. There’s also a lot of mentions of athletic association requirements and research.

But all of that comes after the fact. These schools happily scheduled Bishop Sycamore and didn’t seem to do much, if any, research to confirm that the program was playing by the rules or met the criteria that would suffice for student safety. Some of the school officials outright admitted that they just assumed everything was copacetic and, ‘hey, what are they supposed to do anyway? Who has the time to do the work, really, we’re just simple football coaches.’

There’s a lot of Unfrozen Caveman Lawyer going on here.

Second, one of the things that people involved in high school football take for granted, but the general public probably doesn’t realize, is the simplicity in the game-scheduling process. The Washington Post noted how, sometimes, games like these can be scheduled on message boards (like this one) where coaches simply ask for opponents. That’s literally how DeMatha ended up scheduling their season-opening contest against a school called Holy Spirit. And we know that message boards played a big role in the Bishop Sycamore story as well.

Ultimately, the question is whether or not the Bishop Sycamore saga will change anything when it comes to the way these kinds of shady football programs propagate? And furthermore, whether the national powerhouses stop scheduling them blindly in order to assure an easy win and pad their own stats? Judging by many of the comments above, it’s hard to think the answer will be yes.