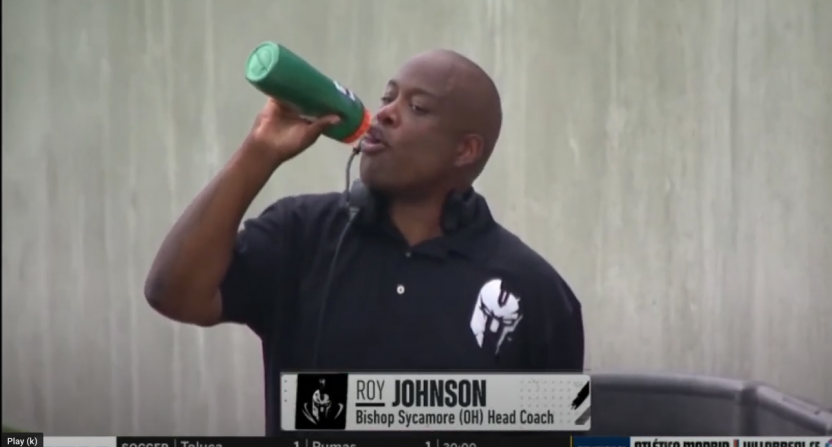 Remember Bishop Sycamore, the highly questionable “school” (or “post-grad football academy“, or “scam,” as per a just-released Ohio Department of Education investigation) that was blown out by IMG Academy in a nationally-televised ESPN game in August? That sparked plenty of investigations into the conditions for players, the lawsuits, the oversight from governing bodies, and the involvement of media figures and companies and scheduling middlemen. It also launched at least one documentary, coming to HBO next year from Michael Strahan, Adam McKay, The Athletic and more, and other documentaries have been discussed. But one notable element of that,  discussed in a new feature ( from David W. Chen, Billy Witz, Alanis Thames and Kevin Draper of The New York Times) on the players from the Bronx who went to Bishop Sycamore’s Christians of Faith Academy predecessor, is how former Bishop Sycamore coach Roy Johnson (seen above on that ESPN broadcast) was compensated for his participation in that documentary, at a time when many of his former players are facing significant struggles. How significant? Here’s one particular story from that Times feature, shared by Thames on Twitter:

Rodney Atkins, a quarterback from the East Bronx, was the first of the group to be sold on the grand plans of Christians of Faith Academy and convinced his friends to join him in Columbus. He was recently admitted to a Bronx hospital psychiatric ward. pic.twitter.com/Zp87rWEWyX

Rodney Atkins talks to the Times reporters later in that feature, and he’s less negative on the school than his mother Marysol is. But she has her own first-hand experience with the “program”; she travelled to Columbus from North Carolina in 2018 to check on her son, “walked into chaos” (she found one staff member supervising two floors of players at a hotel with limited meals provided), and wound up staying for three months herself to try and help the players. And while she isn’t wholly negative on it either (she talks about why previous struggles convinced players and parents this was worth a try, even though it wound up not being so in the end for many of them), her perspective illustrates the impacts this left on many of those involved. The full Times piece is a worthwhile read on that front, with perspectives from several different players. And, like Marysol Atkins says, many of those players “fought hard to end up with nothing.”

And, amidst that, it’s notable that the main person who has been publicly reported as receiving compensation for discussing the Christians of Faith Academy/Bishop Sycamore saga is Johnson. Yes, he’s a central part of this story;  he was listed as the founder of Christians of Faith Academy, he was the Bishop Sycamore coach at the time they played IMG, and he’s been regularly featured in court documents, interviews, and more about these schools. And yes, people receiving compensation for participating in documentaries is not new in the wider world (including the Fyre Fest organizer) or in the sports world, and it is notable that there have been no reports to date of Johnson getting any sort of creative control on the final product here (he’s not even listed as a producer). But it’s interesting that this also means he says very little to reporters asking about the story, mostly just “Everything will come out in the documentary.” Here’s that segment from the Times piece:

In an interview, Roy Johnson, the academy’s founder, said he could not discuss much because he had sold the rights to the story to Michael Strahan, the television host and former football star, who is producing an HBO documentary. The film will tell the “strange saga,” according to The Hollywood Reporter.

“Everything will come out in the documentary,” Johnson said, noting that several of his former athletes now play college football. “Different people’s perspectives.”

Of course, we don’t know the details of how much Johnson was paid for those rights. And pieces like this Times feature have included people (in this case, Bishop Sycamore athletic director Andre Peterson) saying Johnson put his own money into the “school.” And Marysol Atkins is also quoted saying it seemed like Johnson was investing. Here’s that discussion:

“He kept acting like the money was supposed to come,” Atkins said of Johnson. “‘I don’t know what the holdup is. I’m trying to get a loan to cover it.’ It was always, like, him seeming to feel as desperate as we were. He’d disappear and say I’m trying to figure out a way.”

Peterson, the former Youngstown State player, said he and his wife, along with Johnson and the coaches, had pumped thousands of dollars of their own money into the program because they believed in “trying to help young men who need help.” A handful of opposing teams gave them travel stipends, but the money did not cover hotels, buses, food and other expenses.

“If it was about the money, I’m probably the stupidest businessman in my life or anyone else’s,” Peterson said.

So Johnson isn’t necessarily coming out ahead overall out of this situation, especially considering there’s still plenty of litigation he’s named in over unpaid bills. But it is interesting that he confirmed here he received compensation from Strahan’s company for “the rights to the story,” and that he’s saying that that prohibits him from saying much to other media. And that appears to be quite a contrast to where things are at for players from COF and Bishop Sycamore like Rodney Atkins, who “fought hard to end up with nothing,” but will talk to the media about their experiences there without being paid for doing so.