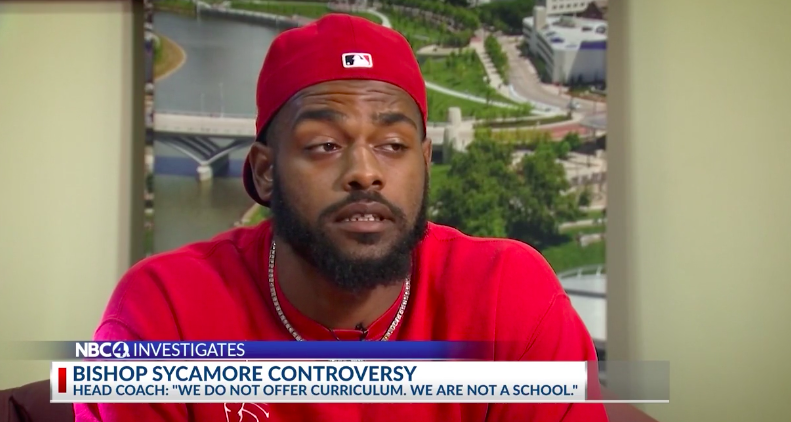 The initial curiosity surrounding Bishop Sycamore, the highly overmatched football team that found themselves getting pummeled by IMG Academy on ESPN a couple of weeks back, has started to dissipate. But while we’ve certainly gotten some answers, such as how this game happened in the first place, how schools like Bishop Sycamore work, what it’s like to play for this kind of team, and who is profiting off of these arrangements, there is still plenty left to learn about this shady corner of high school athletics.

Perhaps one of the central questions that might seem obvious but can be hard to answer specifically is, what, exactly, is Bishop Sycamore? Former head coach Roy Johnson tried to reassure the public that, despite the fact that the program did not have a physical address and raised many questions about where players were housed and schooled, it was not a “scam.”

Now, current head coach Tyren Jackson is trying to go on record to further any idea that the school is a sham, starting with admitting that it’s not actually a school.

Jackson spoke with NBC4 in Columbus, Ohio over the weekend and answered questions about Bishop Sycamore, providing a fairly blunt assessment that actually seems to line up with what most people assumed in the first place.

“We do not offer curriculum,” Jackson told NBC4. “We are not a school. That’s not what Bishop Sycamore is, and I think that’s what the biggest misconception about us was, and that was our fault. Because that was a mistake on paperwork.”

NBC4 notes that when they pressed him on what that mistake was or entailed, Jackson didn’t provide any further information and said he didn’t know much about the paperwork, which was submitted to the Ohio Department of Education before he was hired.

They also pressed him on the fact that the “school” had reported a bell schedule for the prior year, beginning at 7:10 a.m. and going until 3:05 p.m. As for why a school that is not a school would have a bell schedule, Jackson had no answers.

“Right, and I don’t know anything about that. I won’t speak on stuff I don’t know about. Like I said, if it was something that happened like that, then that’s terrible. That’s not how you do business.”

“I don’t have any problem cooperating, letting them know whatever they want to know and things of that nature,” he said. “That stuff should never had happened the way it happened. I’m willing to take responsibility for it and say that it was a mistake. It’s something that shouldn’t have been that way, and that’s something that I have to address stepping into this role.”

Finally, as part of his defense of the program and the kids who play for Bishop Sycamore, Jackson can’t help but lean into the sense of self-promotion that is a hallmark of these situations. That all news is good news and the ongoing sordid saga surrounding Bishop Sycamore will, in the end, be to their benefit.

“A lot of it, you can say, was self-inflicted, and I’m willing to say that,” Jackson told NBC4. “But at the same time, that’s probably from a head-down type of thing. Don’t attack these kids. Don’t take that part from them, now that they don’t have a season, possibly. Once the smoke clears, we’re national news. Whoever does schedule us next will be national news.”

It’s hard to believe any reputable program will want to schedule Bishop Sycamore, or that such a game would be broadcast in a way for a lot of people to see it, but like so many turns in this story, we’ll see what develops next.

You can read all of Awful Announcing’s coverage of Bishop Sycamore here.