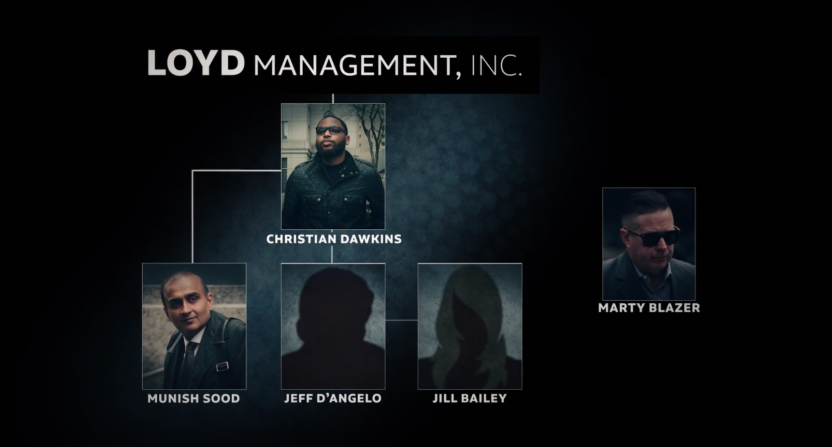 HBO knew exactly what it was doing in scheduling The Scheme days ahead of this year’s planned Final Four (the film’s final spoken words are “Fuck The NCAA. How’s that?”). That pointed timing has, for the most part, gone by the wayside, but the timing is still interesting for some other, less obvious reasons.

While not airing prior to the culmination of March Madness, The Scheme does air on the heels of HBO’s hit documentary series McMillion$, which also centers around an unusual, high profile FBI investigation and subsequent trial. But while McMillion$ had a broad spectrum of perspectives, including the attorney general’s office, defendants, and the FBI, The Scheme does not.

The Scheme’s storytelling is substantially narrower, as the the bulk of time on screen is heavily tilted to Christian Dawkins, his lawyers, and a few journalists. This is Dawkins’ story, and it is lightly challenged, not fact checked, or augmented whatsoever. In fact, the majority of the movie follows the same pattern:

This happens for about two hours. However, the formatting is not the filmmaker’s fault, because we learn towards the end of the documentary that the government backed away from pursuing this case too doggedly, partially due to agent misconduct during the investigation. We never hear the government’s side of the investigation or trial, nor do we hear from any of the coaches, players, or shoe companies involved. There also isn’t much insight from anyone at the NCAA, nor any agents or AAU coaches.

While Dawkins doesn’t charm you over the length of the film (he’s generally a little dismissive, evasive, and combative at times), you’re left with the same takeaway he had about this whole mess: what the hell was the point? In the wake of McMillion$, it’s hard to swallow The Scheme as the culmination of a massive investigation into fraud and conspiracy.

When you add up who was let off the hook, who evaded any repercussions, the total of cost of this investigation, what was actually reformed because of this investigation (nothing), and who actually initiated and suggested the criminal acts in The Scheme (primarily an undercover FBI agent and an informant), it just doesn’t add up at all. You’re left with the overall feeling of ‘really, guys?”.

Dawkins, fairly or unfairly, became the fall guy for a flawed investigation that seemed to derail at its most critical point. This is his story, and director Pat Kondelis tells it well. My only gripe would be that over two hours, The Scheme brings very little to the table in terms of introspection. There are some bombshell taped phone calls that will certainly lead to a lot of online chatter, but Dawkins does very little introspection and Kondelis opted to only briefly touch on all the stickier issues.

We don’t get much insight or context into the roles of AAU basketball, college basketball recruiting, the role of shoe companies and agents, and the middlemen between each level of the scandal the film is named after. Some of the specifics what Dawkins did, who ordered him to do it, and why, is pretty sparse, and I imagine that was a condition of his participation. Ultimately, we don’t get much in the way of “these are the issues plaguing amateur basketball,” and The Scheme is more of a story that chronicles an aborted FBI investigation that failed to accomplish much of anything. Given the two hour runtime, I think there was probably enough room for bot. Nevertheless, Dawkins’ personal story is one worth watching, although it will leave you with a lot more questions than answers.

The Scheme premieres on Tuesday, March 31st at 9 PM on HBO.