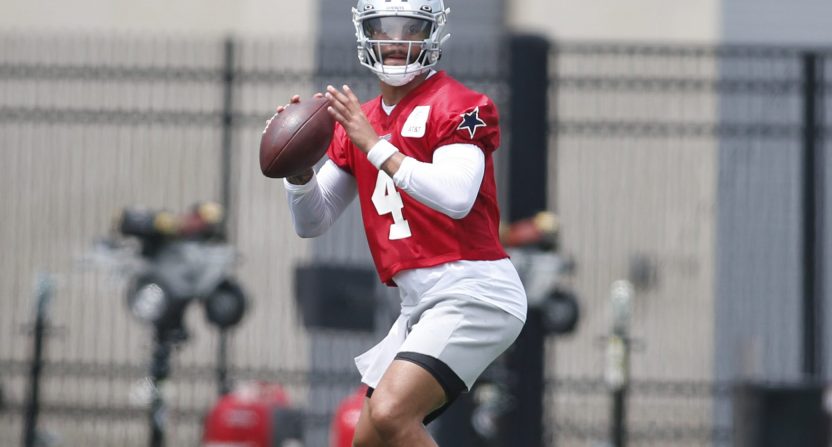 The Dallas Cowboys will be the focus of HBO’s Hard Knocks this summer, HBO announced in a release today. The new season will premiere August 10th.

That was always the likeliest scenario, given that Dallas was one of the teams that had no choice if HBO wanted them to do it. Our Joe Lucia had them ranked second behind Arizona among those five teams for narrative purposes, but clearly HBO executives felt like the Cowboys brand would be more nationally appealing:

Why it could be good: They’re the Dallas Cowboys, America’s Team, blah blah blah. Having the Cowboys on Hard Knocks certainly would be the best thing for viewership. Dallas could also have a very interesting situation pop up at quarterback (will Dak Prescott return, and if so, how will he look after his ankle injury? Could they trade for Russell Wilson? Would they take a QB tenth overall?), which would be compelling TV. Also, Jerry Jones loves attention, Ezekiel Elliott can’t seem to avoid being a lightning rod for controversy, and Mike McCarthy reportedly smashed watermelons as a motivational tool last season.

“We are thrilled that Hard Knocks will be returning this summer and excited for our return to the NFC East and the Dallas Cowboys franchise,” says Jonathan Crystal, Vice President, HBO Sports. “We are beyond grateful to the Cowboys for opening up their doors and allowing HBO and NFL Films to spend the summer with one of the sport’s world’s truly iconic franchises as they prepare for the upcoming season.”

Camera crews will head to the Cowboys’ training camp in Oxnard, California in the next few weeks to begin filming, with the action heating up in August when the cinema verité show focuses on the daily lives and routines of players and coaches. This season of HARD KNOCKS marks the Cowboys’ third time on the show having previously been featured in 2002 and 2008. HARD KNOCKS: THE DALLAS COWBOYS will be narrated by Liev Schreiber, marking his 15th season with the show.

“The Cowboys are one of the most storied franchises in NFL history and a team that elicits strong reactions from fans around the world,” said Ken Rodgers, Vice President, Senior Coordinating Producer at NFL Films. “Tens of millions of fans love them, but just as many people love to hate them. Either way, when the Cowboys show up people watch, which makes them perfect for Hard Knocks. This year, their high-profile status as “America’s Team” is paired with uniquely interesting storylines. We can’t thank Mr. Jones and Coach McCarthy enough for letting us tell the story behind what we hope is the beginning of an exciting year in Dallas.”

The Cowboys appeared in 2002 and 2008; their appearance in 2002 was the second season in Hard Knocks history, and was arguably the year that really propelled the franchise into what it became. (Hard Knocks, not the Cowboys, although the quarterback battle between Quincy Carter and Chad Hutchinson did admittedly foreshadow a few decades without a Super Bowl appearance.)

This will be a return to form for Hard Knocks, which had experimented with focusing on multiple teams to mixed reviews. They certainly won’t be short on potential drama and storylines this year, either.